Under pressure from the government and right-wing thugs, civic activists are banding together to protect their vital work. 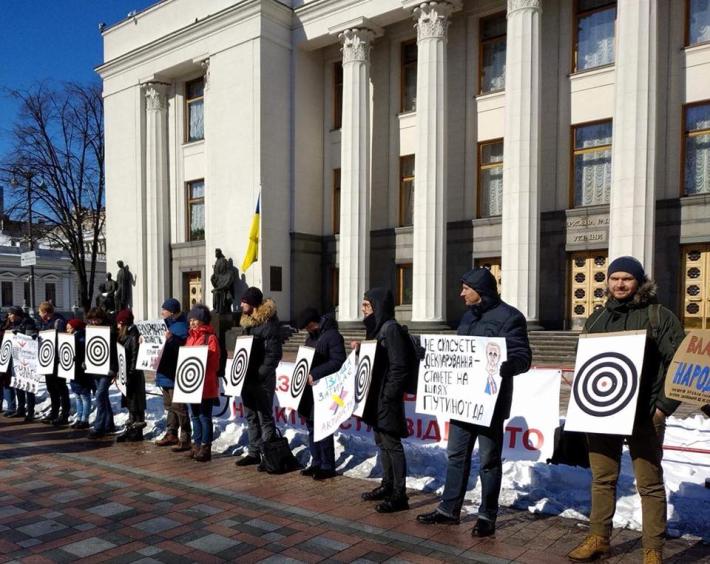 Under pressure from the government and right-wing thugs, civic activists are banding together to protect their vital work.

Fears that April 1 would mark the beginning of new efforts to malign and discredit anticorruption activists in Ukraine have turned out to be well founded. That date was the deadline—under a new law supported by the government—for anyone in civil society working to counter corruption to declare their income and assets publicly.

The first shot in the smear campaign was fired against Iryna Fedoriv, editor of the anticorruption website Chesno (Honesty). In an apparent case of paid news, an online outlet that is widely considered to be under the influence of the Radical Party published a story about Fedoriv’s property, implying that she had acquired it through corrupt means because the price she paid was too low. Fortunately, her critics missed their mark: Fedoriv bought the property in 2006, when the Ukrainian currency was far more valuable. This slipup with the facts was not out of character for the Radical Party, a populist faction that is prone to publicity stunts.

Nevertheless, high-level politicians did not give up their efforts to thwart anticorruption organizations and activists in Ukraine, peddling misleading claims aimed at casting a shadow over their work. For example, President Petro Poroshenko’s representative in the parliament, Iryna Lutsenko, has reiterated her conviction that forcing anticorruption activists to declare their assets was the right step, accusing them of unprincipled self-promotion.

Such attempts to discredit civic activists are part of a larger campaign that includes physical attacks and specious criminal cases against journalists and other elements of civil society. The phenomenon has prompted growing alarm among domestic and international observers.

In response to these threats, local human rights defenders, journalists, and activists have established a coalition to coordinate their efforts to resist mounting pressure on fundamental rights and freedoms in Ukraine. Several prominent civil society organizations and leaders recently announced the launch of the group, the Coalition to Protect Civil Society in Ukraine.

Freedom House is also supporting the coalition, having concluded in its recently released Nations in Transit report that in 2017 the overall situation in Ukraine deteriorated for the first time since the Revolution of Dignity in 2014. The report cited increased pressure on civil society and the media, and connected it to growing illiberalism across Europe.

Origins of the strife

Over the past two years, the problems that civil society faces in Ukraine have come to exceed what individual groups can handle on their own. Activists and organizations are increasingly subjected to legal and public pressure, as well as to physical attacks that directly threaten their safety and their work. As Freedom House Eurasia program officer Gina Lentine has noted, leading Ukrainian organizations believe that these incidents are targeted and selective.

The challenges to civil society can be broken down into three areas.

1. Electronic declarations: The scandalous requirement that civic activists submit income and asset declarations was heavily criticized—by the Council of Europe’s Venice Commission, Ukraine’s international partners, and even President Poroshenko, who signed it into law—for violating the freedom of association, the right to privacy, and the prohibition on discrimination. Ukraine is now one of only two countries with such a law, which confuses private citizens with public officials, is vaguely written, includes severe penalties for noncompliance, and is highly vulnerable to abuse. However, the parliament failed to request a “gap analysis” and refused to roll back what is essentially a vengeful response to citizens who demand transparency and good governance. Now the civic coalition members are concerned about the “opening of hunting season” on civil society in Ukraine.

2. Targeted persecution:In February 2018 in the western Ukrainian city of Rivne, unknown assailants armed with Molotov cocktails set fire to the apartments and offices of local anticorruption and environmental activists, stole their computer servers, and destroyed their organizational and personal property. In early March, riot police in Kyiv used force that was widely considered disproportionate to disperse a protest rally near the parliament building. During the police action, several journalists were also attacked. Meanwhile, a wave of violence and intimidation by right-wing radical groups culminated with attacks on public events organized by civil society activists in Kyiv, Uzhgorod, Poltava, and other cities.

3. Impunity: The people responsible for attacks on civil society are in many cases well-known figures, including prominent public personalities and law enforcement officials. They openly persecute civil society activists, human rights defenders, and journalists, yet they somehow manage to avoid accountability. This impunity could fuel more radicalization and aggression on the part of already hostile groups. Without adequate investigation and punishment of blatant crimes, it is entirely possible that that such attackers will eventually act on their threats to “shoot” activists.

More than 30 Ukrainian nongovernmental organizations, activists, and journalists have declared their commitment to working within the new Coalition to Protect Civil Society in Ukraine. But to address the current challenges, the coalition will have to expand in size and build its capacity to pressure Ukrainian authorities to take action, both inside the country and internationally.

Within Ukraine, civil society must seek political allies beyond the group of reform-minded lawmakers known as “Euro-optimists.” Internationally, the barrage of criticism from the European Union, the United States, and international human rights bodies has apparently failed to fundamentally change Ukrainian leaders’ calculations. Activists and their international supporters will have to increase, coordinate, and sustain this sort of pressure to yield meaningful results. In the meantime, one of the most urgent tasks is to develop effective civic mechanisms for the physical and legal protection of activists, to fend off the current aggression and prevent any future escalations.