US procrastination in using well-defined tools to sanction supporters of Belarusian president Alyaksandr Lukashenka stands in opposition to a renewed American commitment to promote democracy. 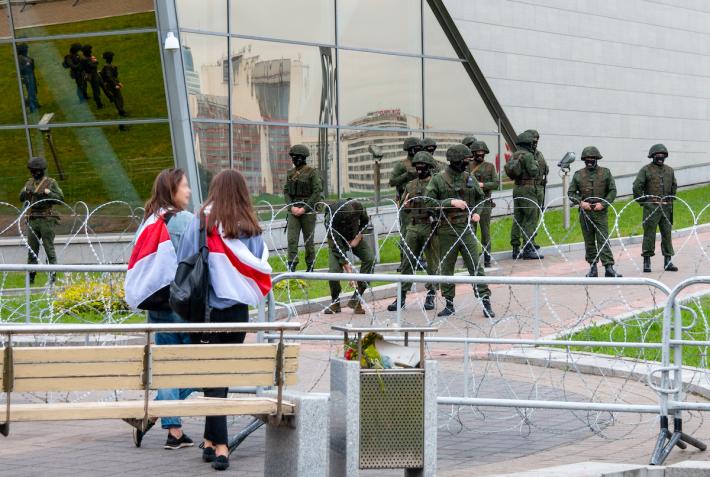 Months after orchestrating a blatantly fraudulent presidential election last August—the results of which were unrecognized by democratic nations including the United States—and presiding over one of the most violent repression campaigns in recent European history, Alyaksandr Lukashenka has maintained his hold on Belarus. Since that election, anti-Lukashenka protests have waned due to the collective trauma of the country’s predicament, acts of state-sanctioned torture, and the imposition of long prison terms for activists and journalists. As the months wear on, the exiled opposition’s calls for democratic nations to maintain pressure on the Lukashenka regime become ever more desperate.

At first, the US response to Lukashenka’s power grab was overshadowed by prompt discussions of sanctions in European capitals. The US response was criticized as sluggish: while thousands of people were involved in acts of electoral fraud and state-sanctioned violence, only 11 officials and four state entities were blacklisted by the US Treasury, and another 109 people were placed under State Department travel restrictions. But the US government was way ahead of its European Union counterparts in having these mechanisms in place: Executive Order 13405 has directed sanctions against perpetrators of political repression in Belarus since 2006, in response to that year’s fraudulent presidential elections.

Thanks to this executive order, nine Belarusian companies, all of them connected to state-owned petrochemical conglomerate Belneftekhim, have been on the Office of Foreign Assets and Control’s blacklist for at least a decade. Surprisingly, however, these companies have been allowed to do business with firms in the US and use US financial institutions.

Back in 2015, not long after President Lukashenka won a fifth term in an unfair (but relatively uneventful) election and preemptively released political prisoners, the US Treasury issued a general license to these firms. The license was issued quietly, as the United States sought to break years of deadlock on human rights and democratic governance issues through the US-Belarus Human Rights Dialogue.

Just days after Lukashenka claimed another term in office last August, US Representative Alcee Hastings, who chaired the Commission on Security and Cooperation in Europe, called on then treasury secretary Steven Mnuchin to repeal the license. No action followed due to the partisan deadlock of the US election season.

At year’s end, a bipartisan effort to reauthorize the Belarus Democracy Act, which expands the reach of sanctions against the Lukashenka regime’s supporters, succeeded. However, neither the former Trump administration nor the current Biden administration have fully enforced these sanctions, which have been on the books for nearly 15 years.

The reason for the Biden administration’s inaction on revoking this license is unclear. If the administration wishes to, it can do so quite swiftly. Take the example of Belarusian companies Lakokraska and Polotsk Steknovolokno: they received a general license in November 2010 only for it to be revoked within three months, in response to a crackdown after that year’s flawed elections.

Of the companies allowed to interact with American financial institutions, several have suppressed workers’ rights since last August’s elections by intimidating employees, threatening their arrest, and dismissing those who dare to strike. H.Res.124, which was introduced last month, calls for sanctions against companies that persecute their workers “in connection to the ongoing democratic movement.” This proposal would ideally be superfluous, but may also prove necessary in light of the Treasury’s continued procrastination.

Some in Washington fear that repealing the general license would send these firms into the hands of Russian oligarchs. That argument is a classic red-herring distraction: investment ties between Russia and Belarus have been growing stronger for years, while Moscow has envisioned the envelopment of Belarus in a political union since the late 1990s. Keeping the waiver will not stop this process.

While Belarusian voters have long faced manipulated elections and crackdowns, the extent of this most recent campaign is unprecedented. But the steps taken in the aftermath of the 2006 and 2010 elections have not been followed by expeditious action this time around, reflecting poorly on the United States’s ability to hold autocrats accountable for assaults on human rights. Allowing supporters of the Lukashenka regime to do business with American firms and access US financial institutions works against strategic US interests and threatens to violate the premise of a renewed US commitment to defend democracy both at home and worldwide.