When Chinese president Xi Jinping makes his first state visit to the United States, set to begin September 22, the White House will need to address the problems that the Communist Party’s mounting information controls pose for both countries’ economies. 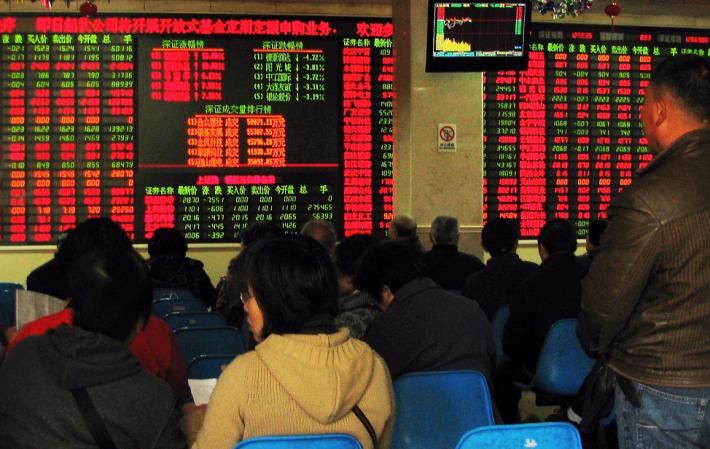 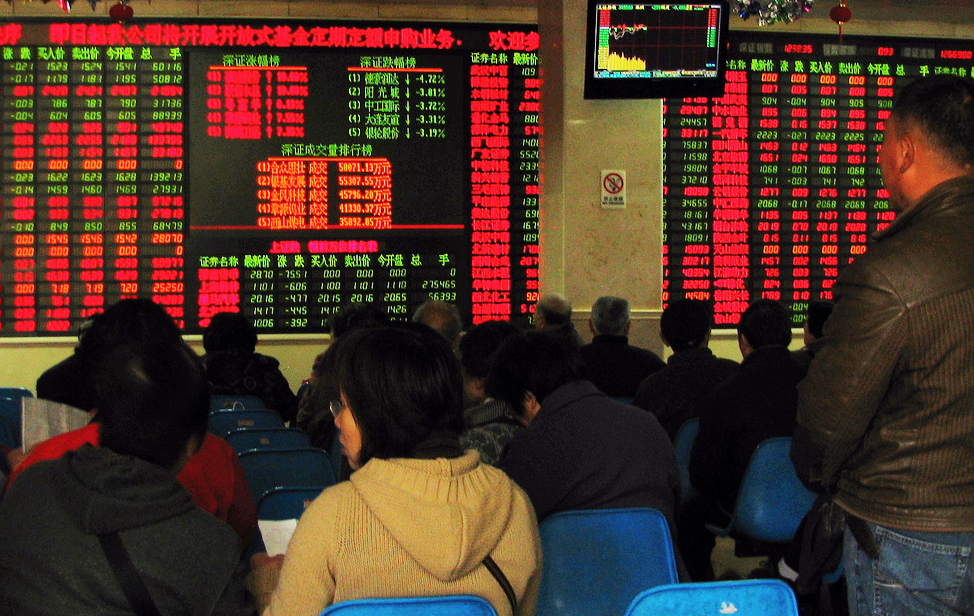 This blog was published originally in the Chinese edition of the Financial Times.

When Chinese president Xi Jinping makes his first state visit to the United States, set to begin September 22, the White House will need to address the problems that the Communist Party’s mounting information controls pose for both countries’ economies.

The Party’s sprawling efforts to defend its political monopoly through censorship have for years been costing the U.S. economy billions of dollars, while at the same time hampering U.S.-China relations. The Chinese authorities have restricted access to U.S. social media and cloud services, blocked U.S. news websites, and limited Chinese fans’ ability to view U.S. entertainment products. However, the intersection between Beijing’s politically motivated censorship and the two countries’ economies has become even starker over the past month, following the Chinese stock market’s latest plunge.

On August 24, the Shanghai Composite Index dropped 8.5 percent, its sharpest decline since 2007. Coming after two months of alarming slides, the new drop spurred a global stock sell-off, adding to market volatility in the United States, Europe, and Asia.

The initial response by Chinese state media was silence. The front page of the Party–run People’s Daily, the state broadcaster’s flagship evening news program, and the official Xinhua news agency’s homepage all omitted mention of the market turmoil for at least one day. Meanwhile, major Chinese search engines censored a growing number of results for the term “stock market disaster.” Screenshots of Baidu search results at 7:15 a.m. on August 25 show over 5 million results. Results for the same query just three hours later displayed only 2.9 million.

Despite robust government controls, many Chinese heard about the market crash and searched elsewhere for details. Millions obtained it from reports by international news outlets and analysis by fellow netizens that was circulated on social media. Consequently, the state media blackout simply added to public distrust in the government and low confidence among Chinese consumers and investors, at a time when Beijing is trying to encourage domestic consumption and reduce dependence on exports.

Moreover, this combination of official censorship and unofficial information-sharing increases the risk and potency of rumors that could worsen a financial crisis by, for example, causing runs on banks or panicked selling of more stocks.

When state media finally broke their silence after a few days, the coverage followed a core theme of deflecting blame from the government and senior party officials. Commentators Heather Timmons and Zheping Huang have identified five state media “scapegoats,” including the U.S. Federal Reserve.

More disturbingly, the authorities cast blame on journalist Wang Xiaolu of Caijing, a respected financial magazine, arresting him and parading him on state television. On August 31, a downcast Wang appeared on China Central Television to confess that information he provided in a July 20 article was “based on hearsay” and had “caused panic and disorder at [the] stock market.” But fellow Chinese journalists and media watchers noted that the acts to which Wang “confessed” were common journalistic practices around the world. Moreover, analysis of the Shanghai Composite Index found that the market actually improved for three days after Wang’s article. 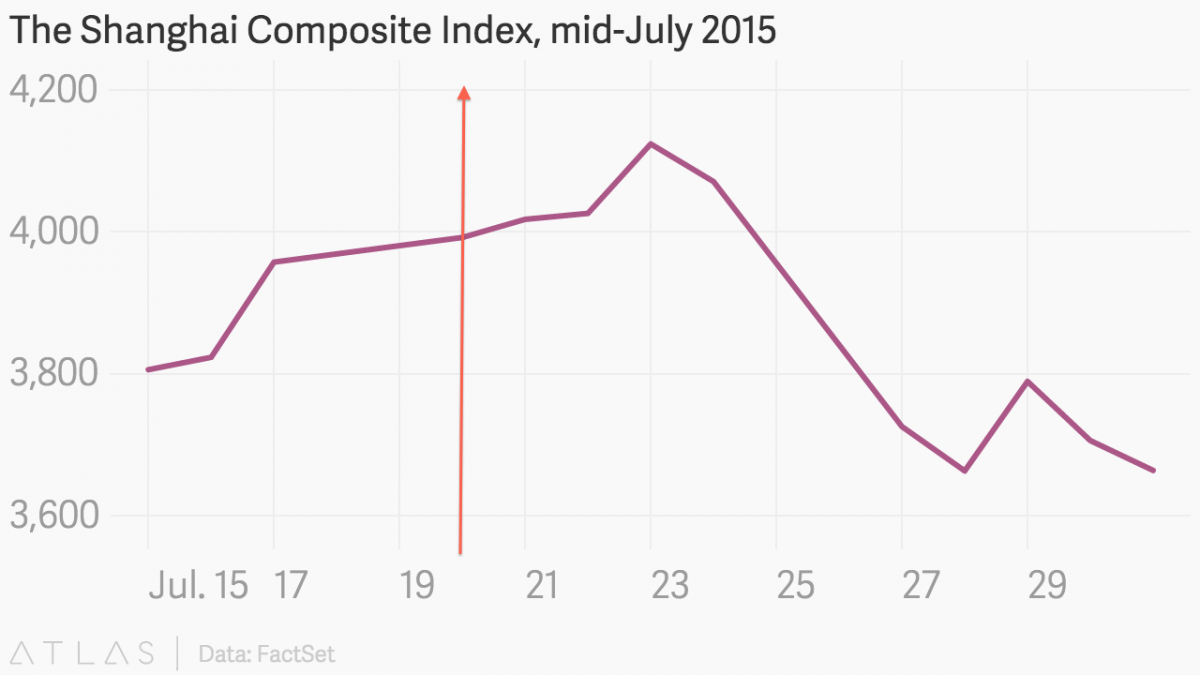 PHOTO: Journalist Wang Xiaolu was forced to confess on state television that his July 20 article disrupted the stock market, but the market actually improved for three days following its publication. Wang’s case is widely seen as an attempt to scapegoat and intimidate financial reporters. Photo Credit: Quartz

It appears that the true goal behind Wang’s detention is to intimidate journalists into following the official line and avoiding strong investigative reporting on the economy, particularly after many displayed ingenuity and defiance while covering the aftermath of the recent Tianjin chemical explosions. According to at least one stock-market investor and reader of financial publications, a chilling effect was already tangible in the first week of September.

The sudden pressure on economic reporting represents a shift in official attitude because financial publications have long been given more leeway than other news outlets to engage in aggressive, independent journalism.

Meanwhile, the authorities are moving to fill the gap in coverage. A leaked Communist Party directive from September 7 revealed plans to project a rosy view of China’s flagging economy. The instructions—issued by the party’s Central Propaganda Department and distributed by, among others, Xinhua’s editor in chief—outline a series of steps that should be taken to promote “the discourse on China’s bright economic future.” These include preparing detailed drafts for forthcoming articles that will serve as both “domestic- and foreign-facing propaganda.”

Such manipulation is not entirely new. A 2014 Freedom House analysis of over 300 censorship and propaganda directives found that the economy was the seventh most commonly targeted topic. But the scale and scope of the effort appears to be expanding as the economy slows down. This is a dangerous trend.

A free flow of information about the economy is important at any time—a fact that the Communist Party itself has implicitly acknowledged in the past by giving business newspapers a longer leash than most. But in times of uncertainty and crisis, transparency becomes even more critical.

If President Obama wants to do what is best for the U.S., Chinese, and global economies, he will press Xi to reverse course and give markets the information they need to function properly.