Venezuela, joining Cuba, has become the second country in the Americas rated Not Free by Freedom House. If left unaddressed, its humanitarian crisis could prompt large-scale migration. 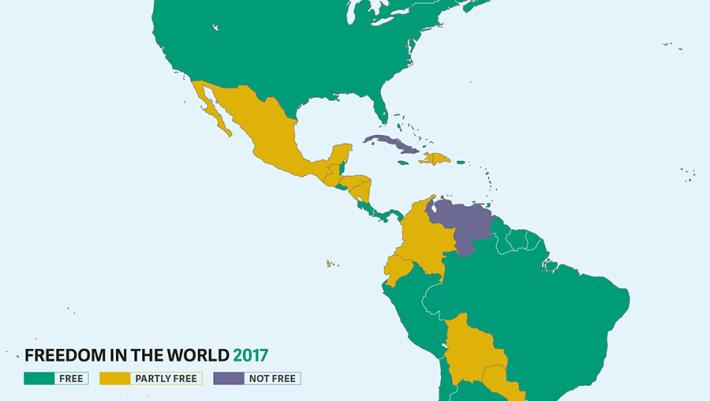 Venezuela, joining Cuba, has become the second country in the Americas rated Not Free by Freedom House.
If left unaddressed, its humanitarian crisis could prompt large-scale migration.

With global threats to democracy appearing to multiply each day, it would be easy to overlook Venezuela. Its economic, health, and political crises seem relatively self-contained compared with the flow of migrants from the Middle East and North Africa. And its government’s promotion of “21st-century socialism”—once a source of angst in Washington—is far less concerning to proponents of the liberal international order than the rise of right-wing populism and nationalism in Europe and the United States. Given its waning ideological influence and deteriorating economy, Venezuela is increasingly portrayed as a country in slow decline, serving as a cautionary tale for other oil-dependent nations.

However, this narrative misses the importance of 2016 as the year in which Venezuela fully shed its democratic façade. It also diminishes the urgency of stemming the country’s authoritarian slide.

For more than a decade, Venezuela was referred to as a “competitive authoritarian” state, where some rights were restricted but elections occurred regularly and opposition parties could participate, despite built-in disadvantages. However, in 2016, institutional channels for citizens to influence government decision-making were closed off entirely, and the popular will, expressed through an opposition victory in the 2015 legislative elections, was ignored altogether. Government opponents were thrown in jail at alarming rates, and lawmakers’ efforts to solicit outside support to address the humanitarian crisis were blocked for political reasons. Today, an unaccountable executive branch and a partisan judiciary rule over a citizenry that effectively lacks political representation.

As a result, in Freedom in the World 2017, Venezuela plunged into the Not Free category, joining Cuba as one of just two countries in the Americas earning the annual report’s lowest classification. In 2009, Freedom House found that Venezuela was no longer an “electoral democracy,” but it maintained a Partly Free status. As the latest downgrade suggests, Venezuela is now an unambiguously authoritarian regime.

Though 2016 featured a continuation of Venezuela’s long-standing downward trend, the government made less of an effort to veil its repressive tactics than in previous years. Having lost National Assembly elections in December 2015 to the opposition Democratic Unity Roundtable (MUD) coalition, the governing United Socialist Party of Venezuela (PSUV) moved quickly to strip the legislature of its constitutional functions. A decision by the Supreme Tribunal of Justice (TSJ)—Venezuela’s highest court, stacked with PSUV loyalists—invalidated the voting results for four legislative seats, thereby eliminating the opposition’s supermajority, which is needed to make appointments to key institutions like the National Electoral Council (CNE). The TSJ repeatedly nullified legislation passed by the National Assembly on alleged grounds of unconstitutionality, including a bill to allow foreign humanitarian aid into Venezuela. The executive branch also pushed through a federal budget without allowing for legislative review, in clear violation of the constitution.

Opposition forces turned to a constitutionally sanctioned process for organizing a presidential recall referendum, but this too was blocked for blatantly political reasons. With President Nicolás Maduro’s approval ratings already at historic lows, the CNE initially postponed and then indefinitely suspended the referendum drive based on spurious allegations of fraud. The decision virtually ensures that the PSUV will retain power through the end of Maduro’s term in 2019.

The CNE’s rejection of the recall process has left Venezuelans in a powerless position. Chronic food and medicine shortages, soaring rates of violent crime, and uncontrollable inflation have plunged some middle-class Venezuelans back into poverty and left much of the country struggling to protect themselves and meet daily needs. Yet the government has repeatedly ignored citizens’ demands by dismissing the deepening crisis as an “economic war” waged from abroad, while doing nothing to stem its spread.

The government continues to escalate its repression of political opponents. According to the Venezuelan watchdog and legal assistance organization Foro Penal, there were 11 political prisoners when Maduro came to power in 2013. That number now hovers around 100, with more than three dozen having been added to the ranks in 2016. Delson Guarate, a mayor in the state of Aragua, and Alejandro Puglia, a journalist and employee of the National Assembly, were arrested in early September. Opposition activists Francisco Marquez and Gabriel San Miguel were arrested in June while collecting signatures for the recall petition; they were released on October 18 on the condition that they leave the country. More than a dozen people remain imprisoned for participating in protests on October 26 to condemn the CNE’s rejection of the recall referendum. And at least four more have already been detained since the beginning of 2017. Opposition leader Leopoldo López has been imprisoned since 2014.

Venezuelan intelligence officials increasingly act as a sort of secret police, often arresting political or civil society leaders without a court order and in violation of due process. In some cases, family members are kept in the dark about the victims’ whereabouts for hours or even days before it is confirmed that the victim has been taken to a Venezuelan prison. Yon Goicoechea, a prominent leader of the opposition party Voluntad Popular, remains imprisoned after disappearing on August 29. He was held illegally for more than a day before intelligence officials confirmed his whereabouts; he faced dubious charges of possessing explosives.

Security officials used violence during frequent mass demonstrations during the year, particularly against journalists and student leaders. Authorities often detained journalists temporarily, in many cases confiscating their recording equipment and other devices in a clear attempt to limit critical reporting on the country’s economic and health woes. Journalist Braulio Jatar was arrested in September after videotaping an incident in which citizens banged pots in an expression of protest against President Maduro during his visit to Margarita Island. Jatar remains imprisoned on spurious charges, despite showing signs of rapidly deteriorating health and having been diagnosed with cancer. More than a dozen foreign journalists were denied entry to the country in 2016, mostly while attempting to cover massive demonstrations against Maduro.

A new generation of leaders, or a new wave of migrants?

With the crisis worsening and every institutional means of effecting political change closed off, Venezuelans are desperate. Large numbers, including young people, have fled the country. As many as 150,000 Venezuelans may have left in 2016 alone, in some cases undertaking dangerous journeys by boat. While many youth activists have remained, others have sought safety abroad after seeing friends jailed or prohibited from traveling. The growth of a politically engaged and uniquely creative generation dedicated to achieving freedom for all has been a positive byproduct of Venezuela’s authoritarian shift, but those gains in civic-mindedness could disappear if a significant part of the youth population is lost to emigration, famine, and lack of economic opportunity.

As the Maduro administration has turned its back on the Venezuelan people, the international community has not done enough to lend support. The Organization of American States has found its voice under Secretary General Luis Almagro, who broke from his predecessor in openly and repeatedly condemning Maduro for violating human rights. More will be needed to compel action from leaders across the region.

A country of limitless promise, Venezuela can thrive once again. But that will require sustained international pressure to complement the courageous efforts made by millions of Venezuelans who have taken to the streets time and again in hopes of reclaiming their future.

Around the world, political leaders are openly flouting human rights norms and questioning the core principles that underpin democratic institutions. Those who value freedom and universal human rights must defend them with the same conviction that Venezuelan young people have shown, or face repercussions that reach far beyond Venezuela.

Alexander Brockwehl served as a Freedom House senior program officer for Latin America until 2016. He currently contributes research and analysis for the Freedom in the World and Freedom of the Press publications. He is pursuing a Master in Public Affairs (MPA) degree at Princeton University’s Woodrow Wilson School.