Polish authorities have become more vocal about the rights of Poles living overseas, but they remain reluctant to address attacks on migrants, ethnic minorities, and political opponents inside the country. 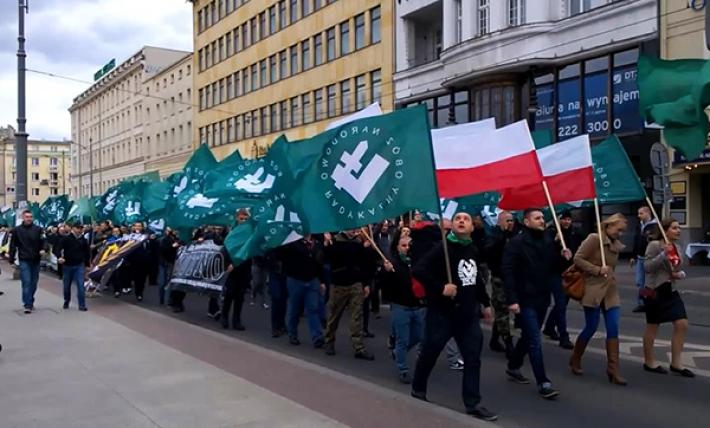 Polish authorities have become more vocal about the rights of Poles living overseas, but they remain reluctant to address attacks on migrants, ethnic minorities, and political opponents inside the country.

Since October 2015, when the conservative Law and Justice (PiS) party came to power with a majority in the Polish parliament, international observers have been keeping a close eye on the human rights situation in the country. The new government earned the suspicions of Poland’s partners in the European Union (EU) and the United States by passing controversial laws regarding the Constitutional Court, the public media, and terrorism, and by ignoring the recommendations of the Venice Commission, the legal advisory body of the Council of Europe, whose representatives have visited Poland three times this year alone. The parliament is now debating a bill—with personal support from some government figures—that would impose a total criminal ban on abortion. Moreover, Poland has been widely criticized for its refusal to accept refugees, accused of violating core democratic values.

In response, the official discourse of the Polish authorities has recently taken a pro–human rights turn. During the latest gathering of the UN General Assembly this month, for example, President Andrzej Duda gave a speech in which he repeatedly stressed the importance of human rights for Poland. Duda listed rights that call for “particular protection”—individual freedom, dignity of the human person and the inviolability of his or her life, and freedom of conscience and religion.

Unfortunately, the government’s actual performance in this field, especially with respect to xenophobia, has often suggested a parochial, nationalistic concern for the rights of ethnic Poles—or even more narrowly, ethnic Poles with conservative or right-wing views—rather than a commitment to the universality of human rights for all individuals.

In the past several weeks, the media in Poland have focused on xenophobic attacks on Poles in the United Kingdom, including a Polish worker who died in Harlow after being beaten by a group of teenagers. With anti-immigrant sentiment on the rise in the UK after its recent Brexit vote, Polish officials decided to send a strong message to their British counterparts. Prime Minister Beata Szydło condemned the attacks, insisting that hate crimes must be stopped and Polish citizens protected by the British authorities. Foreign Minister Witold Waszczykowski, Justice Minister Zbigniew Ziobro and Interior Minister Mariusz Błaszczak visited London and were assured that the British authorities would monitor the situation and strengthen security. President Duda, who won election last year as the PiS candidate, sent letters to the Roman Catholic archbishop of Westminster and the Anglican archbishop of Canterbury asking for support in promoting respect for the fundamental freedoms of Poles living in the UK.

At the same time, the Polish government has done little to counter a rapid rise in hate crimes in Poland. In March 2016, over 300 Polish nongovernmental organizations (NGOs) sent a letter to the prime minister stating that “the lack of reaction and contempt in public discourse create an atmosphere where the perpetrators feel a silent consent.” In April, prosecutor Dariusz Romańczuk reported to the parliament that the number of hate crime cases had increased from 835 in 2013 to 1,548 in 2015. The findings of the report were ridiculed by a PiS vice chairman of the parliamentary committee on ethnic minorities, who said the data must be verified and suggested adding to the methodology to account for other forms of bias, such as that based on the color of socks or a favorite soup.

Most victims of hate crimes in Poland are foreigners distinguished by their “darker skin.” But the recent escalation of aggression in the society doesn’t end there. A few days ago, a professor from Warsaw University, a Pole, was attacked and beaten in a tram for speaking German. Meanwhile, a representative of the ruling party said publicly that the Territorial Defense Force, a military reserve that is in the process of being formed, should be made especially strong and visible in the southwestern region of Silesia, where the local ethnic German minority supposedly fosters a dangerous “pro-German atmosphere.” Such statements provoke hatred and mistrust toward not only migrants, but also neighboring countries and even citizens with deep roots in Poland.

Rights for the majority

President Duda may say that there is no place for racism and xenophobia in Poland, as he did during the commemoration of the 1946 Kielce pogrom. But if in the meantime the government closes the National Council against Racial Discrimination, Xenophobia, and Intolerance, PiS politicians publicly downplay or even support acts of violence, and far-right radicals openly march on the streets of Polish cities and call for the extermination of Muslims, Jews, or leftists without any reaction from law enforcement, then such statements by the president are nothing but empty words.

The assertion that the will of the majority is more important than the rule of law, repeated many times in different forms by Polish officials over the last year, sums up the government’s real attitude toward human rights. This attitude has been demonstrated through attacks on Adam Bodnar, Poland’s commissioner for human rights; through attempts to discredit and ignore Constitutional Court rulings if they are not in line with the government’s agenda; through witch hunts in the media against NGOs that receive grants from abroad; and through the exposition of various conspiracy theories about other government critics and their “hidden” intentions.

The basic concept of human rights is that they are universal. Poland, a country with a strong tradition of freedom fighters and the first modern constitution in Europe, the home of the Solidarity movement that initiated the collapse of communist regimes across the region, should serve as a leading exemplar of impartial human rights protection, and not only on paper or during official speeches by its representatives. What we see instead is incitement to hatred by mainstream politicians and a selective approach to fundamental freedoms, both of which are feeding a polarization of the society that may take years to reverse.