Democracy’s enemies are gaining strength as the U.S. government disengages from the struggle. 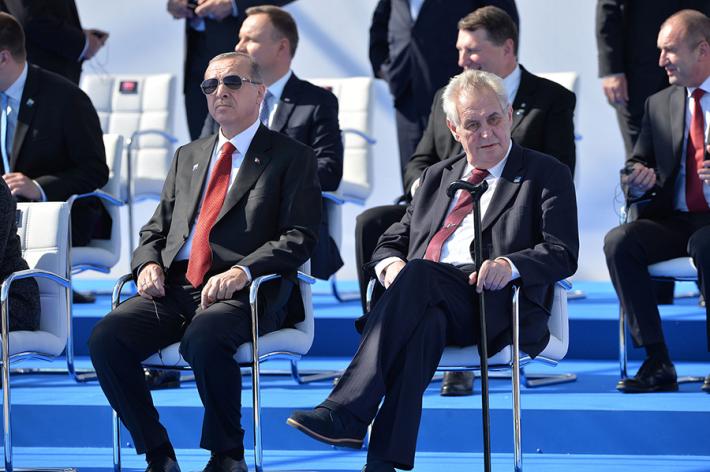 Democracy’s adversaries are on the march worldwide, exporting authoritarian misrule and spreading instability across national borders. But as free societies face their most serious global challenge since the end of the Cold War, the United States is abdicating its traditional leadership role, exacerbating the crisis.

This week Freedom House has published its annual survey on the state of global democracy, and the results make for grim reading. 2017 marked the 12th consecutive year in which democracy has declined around the world: Those countries experiencing setbacks in political rights and civil liberties far outnumber those showing improvements.

Many of the declines are occurring in pivotal countries. Venezuela, once a democracy, has become a collapsing military dictatorship. President Recep Tayyip Erdogan has transformed Turkey from a promising majority-Muslim democracy into a tyranny where thousands of his real or imagined opponents have been imprisoned on political charges. Hungary and Poland, previously exemplars of successful post-Communist transition, have moved into the camp of illiberal states that treat the rule of law with disdain and view press freedom with suspicion. Thailand’s military further entrenched its role as the guiding political force during 2017. In Mexico, the rule of law has eroded due to corruption in places high and low.

In themselves, the setbacks to date are alarming, but not catastrophic. Most of the countries that embraced democracy during the past century remain democratic today. Polling consistently shows strong global support for democracy, and even those living in authoritarian settings — most recently in Iran — have made it clear that they want governments to deliver on core democratic values, such as open elections, press freedom, official accountability and equality before the law.

But the retreat of the United States from global leadership, coupled with the Trump administration’s weak and ambiguous commitment to democratic values at home, raises serious concerns about the near future. As democracy is undermined, the world inevitably becomes a more dangerous place.

In practice, President Trump has largely discarded the principles that formed the basis for American leadership over the previous seven decades. His animating slogan, America First, harks back to the United States’ dangerous flirtation with isolationism in the period leading up to World War II. While he has correctly invoked human rights to criticize a handful of countries such as Iran, Cuba and Venezuela, in general the president has showered his most lavish praise on noxious strongmen and autocrats. Trump continues to offer accolades to Russian President Vladimir Putin, a brutal dictator who represses dissent and seeks to disrupt democracy in the United States and Europe, and he commended President Rodrigo Duterte of the Philippines on his anti-drug efforts, which have featured a campaign of extrajudicial killings.

Also concerning is the administration’s silence in the face of renewed repression in China. Any independent speech on sensitive issues is now subject to severe punishment. The Internet, which had begun to facilitate the development of an independent civil society, has been transformed into an instrument of state control. Beijing has indicated that it will continue to develop its system of repression by incorporating the latest innovations in surveillance technology and artificial intelligence. China has already shared its existing techniques with other regimes; we should assume that any new methods will also be available for export.

The Trump administration’s disdain for the standards of democratic government within the United States will further undermine American interests abroad. A U.S. government that violates its own ethical norms will have little success preaching the virtues of transparency to other countries. A president who rejects verifiable facts, zealously attacks the judiciary and media, and seems to condemn Muslims and other minorities simply because of their faith or ethnicity will have little credibility when pressing rival states to drop disinformation efforts and respect their own people’s rights.

There is, of course, serious controversy about the wisdom, justice and effectiveness of certain American foreign policy initiatives over the years. But since the end of World War II, the United States has been seen rightly as the world’s foremost defender of democracy. Some administrations were more idealistic in tone, and others more “realist.” Yet all post-World War II presidents recognized that, in the long term, the United States should be identified with the global cause of freedom. The Trump administration’s approach represents an abandonment of the bipartisan postwar consensus that the United States’ values and its national interests are both best served by dedication to this cause.

Democracy’s enemies are gaining strength as the U.S. government disengages from the struggle. It is far from clear how freedom-loving peoples around the world will face the new threat with democracy’s strongest champion sitting on the sidelines.