The latest peace talks have made little progress so far, but the territory may be running out of time. 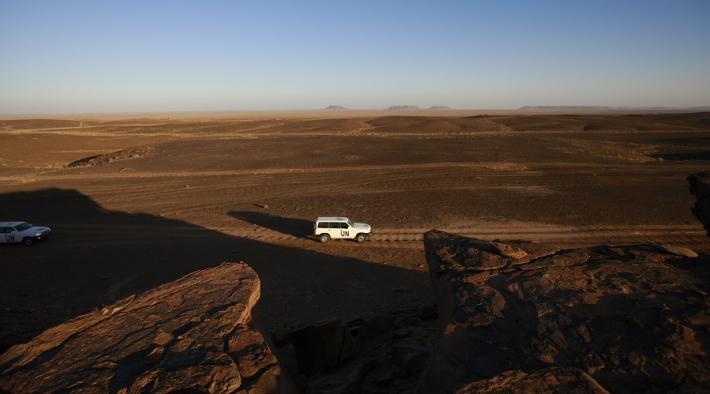 The latest peace talks have made little progress so far, but the territory may be running out of time.

One of the world’s oldest frozen conflicts is set to get even older. On October 31, the UN Security Council voted once again to prolong its peacekeeping mission in Western Sahara, perpetuating a status quo that denies residents many of their basic rights. The mission, known as MINURSO, is ostensibly tasked with organizing a long-delayed referendum on the disputed territory’s status in keeping with a 1991 cease-fire agreement between Morocco, which claims sovereignty over Western Sahara, and the Polisario Front, which asserts its independence.

This latest extension would be unremarkable were it not for UN-sponsored peace talks, the first since 2012, that convened in Geneva on December 5–6. The talks predictably failed to reach a settlement or clear a path for a referendum, though the parties agreed to meet again in early 2019. Horst Köhler, the UN envoy for Western Sahara, said the negotiations served as a “first—but important—step” toward a settlement and praised the parties for “engaging openly … and committing to resolving the conflict.” While anyone familiar with UN platitudes will conclude that these talks led nowhere, the fact that they happened at all amounts to movement given the dispute’s glacial history.

Origins of the conflict

The negotiations seek to end a conflict that was once very much in the international spotlight. Spain’s 1975 withdrawal from Spanish Sahara, a sparsely populated colonial possession, sparked an armed struggle for control of the territory between neighboring Morocco and the Polisario Front, a Sahrawi nationalist group. (Mauritania also claimed part of the territory but withdrew from the conflict in 1979.)

Morocco has historically viewed Western Sahara as its “Southern Provinces,” whereas the Sahrawis have aspired to independence. The Polsario Front, identifying itself with other postcolonial liberation movements, declared the Sahrawi Arab Democratic Republic (SADR) in 1976. A few dozen countries have since recognized the SADR, chief among them Algeria—Morocco’s rival and the main foreign backer of the Polisario Front. A similar number have expressed openness to Moroccan sovereignty if it is confirmed through a referendum, though none have endorsed Morocco’s claims outright.

At the time of the cease-fire in 1991, Morocco occupied about three-quarters of the territory, while the SADR held the rest. The Moroccan government has encouraged the movement of Moroccan settlers into Western Sahara to the extent that they now roughly equal the 200,000 native Sahrawis living in the Moroccan-controlled area. About half as many Sahrawis live in the Polisario Front’s zone.

If the latest round of peace talks are to produce a just solution to the conflict, human rights must be placed higher on the agenda. The Moroccan authorities have allegedly violated the rights of Sahrawis in Western Sahara in part by restricting freedom of expression, suppressing civic activism, and engaging in enforced disappearances of Sahrawi leaders. Last year’s US State Department human rights report noted that Western Sahara suffers from largely the same problems surrounding individual rights, rule of law, and corruption as does Morocco.

The peace process will also have to resolve the fate of the 90,000 Sahrawi refugees living across the border in Algeria. International observers have criticized the Polisario Front for its administration of the camps, claiming that it has recruited child soldiers, restricted personal freedoms, and unlawfully detained Moroccan prisoners of war.

While a proper solution should address all of these issues, it must do so while finding a way to ensure the self-determination of the Sahrawi people, who have never been given a formal opportunity to debate and vote on their status since the end of Spanish rule.

The options at hand

This is unfortunately much easier said than done. One option is a referendum on the autonomy plan proposed by Morocco in 2006, whereby the Sahrawis would set their own economic, cultural, and social policies through representative bodies. Morocco would retain control over defense, foreign affairs, and the Moroccan king’s “constitutional and religious prerogatives.” The Polsario Front has rejected the proposal, arguing that a referendum offering full independence consistent with international law is the only acceptable settlement. Following the plan’s release, the UN Security Council adopted Resolution 1754 in an attempt to bring the two sides together for peace talks, all of which subsequently failed.

The United States has backed Morocco’s road map. After Deputy Secretary of State John Sullivan’s meeting with the Moroccan foreign minister last summer, State Department spokesperson Heather Nauert said the proposal was a “serious, realistic, and credible” solution. Furthermore, the Polisario Front might be able to secure additional concessions from Morocco at the UN-brokered peace talks. A version of Morocco’s plan, while stopping well short of independence, could become an important step forward for democratization in Western Sahara and Morocco as a whole.

A look at the main alternatives does not inspire similar optimism. An independent state in Western Sahara is arguably not a viable settlement. The Polisario Front lacks the capacity to administer the entire territory, an underdeveloped expanse the size of Colorado. Simply granting the SADR full control would likely result in a failed state akin to Libya, where fractious militias and lawlessness are the norm. The SADR would not be able to defend its own borders, let alone the rights of its citizens. Several other solutions have been proposed, but neither party has seriously entertained them. One thing is clear: Unless at least one side considerably adjusts its demands, the impasse is likely to endure.

No time to waste

The renewed push for negotiations has been motivated in part by concerns about religious militancy in the Sahel and Sahara. Islamist insurgencies have rocked the region in recent years, and the international community is consequently eager to ensure the stability of the largest and most populous of the 17 non-self-governing territories designated by the United Nations. As the parties sit down for more talks, they would do well to set aside past frustrations and look toward securing a better future. A refusal to compromise will simply maintain an unacceptable situation—the Polisario Front will deliver neither peace nor prosperity to the Sahrawi people, while Morocco will continue to be seen as an occupying power by the international community. The current state of affairs is an affront to democracy and human rights, and the Western Sahara peace process must deliver a solution that respects both.

Daniel Samet is a foreign affairs researcher in Washington, DC.