What Exactly Is ‘the West’?

President Trump’s use of the term raises questions to which there are no simple answers. 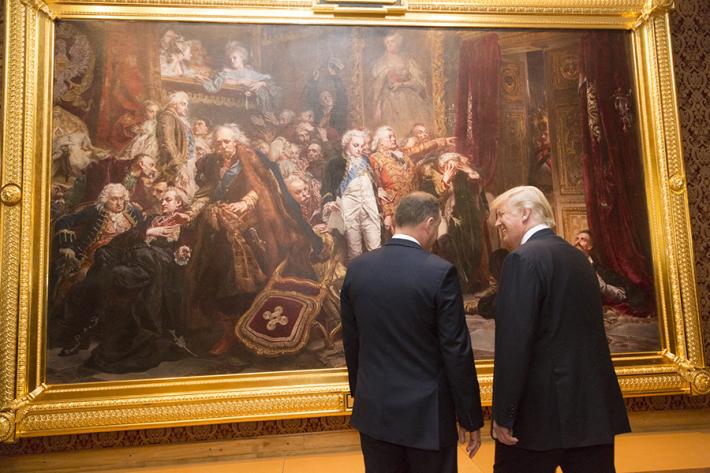 President Trump’s use of the term raises questions to which there are no simple answers.

The centerpiece of U.S. President Donald Trump’s recent trip to Poland was a speech in which he asked “whether the West has the will to survive” in the face of a range of threats, from “inside” and from “the South” and “the East.”

But what, exactly, is the West? Trump refers to it as a “community of nations” that values “individual freedom and sovereignty” as well as the rule of law. He says it is bound together by culture, history, and a common civilization. He explicitly includes the United States, Poland, and “the nations of Europe” in this community—notwithstanding their current troubles.

Russia, by contrast, is presented as both an external threat and a potential member of the club, if it chooses to join “in our fight against common enemies and in defense of civilization itself.”

The concept of a freedom-loving West can be traced to the ancient Greeks and their epic conflict with the despotic Persian Empire to the east. It took on new importance in the 20th century, as a transatlantic alliance of democracies confronted a series of autocratic enemies in Central and Eastern Europe, particularly the Soviet Union.

Today, however, the situation is more complicated. It is far from clear who belongs to the West in the 21st century, and on what grounds. If the definition is focused on Europe, it would exclude the United States and Canada. If it is focused on NATO, it would exclude long-standing democratic allies like Australia and New Zealand.

And if Australia and New Zealand qualify, why not Washington’s other democratic allies in the Asia-Pacific region, such as Japan and South Korea? The people of Taiwan, who also depend on U.S. security guarantees, love their freedom no less than the others. In some of these countries, citizens fought hard to throw off decades-old dictatorships. To include them in the West would remove all geographical meaning from the term, but to exclude them would ignore the centrality of freedom and democracy and the reality of modern geopolitical alignments.

There are countless other ambiguous cases. Ghana and Tunisia are democracies, and both are technically farther west than Poland, where Trump gave his speech, but it seems doubtful that he would include them.

It is obvious that the yearning for “individual freedom and sovereignty” is not limited to any single continent, culture, or historical tradition. Nor is it confined to the current extent of democratic rule in the world. Just as Poland was once behind the Iron Curtain and South Korea was once ruled by military strongmen, there are many authoritarian states today that could be democracies in the future.

But people fighting against tyranny will be at a distinct disadvantage if leading democracies like the United States limit their ambitions to defending a finite cultural community in a certain part of the world. Trump says those in the West “value the dignity of every human life, protect the rights of every person, and share the hope of every soul to live in freedom.”

The real question, then, is not whether the West has the will to survive, but whether the citizens of democracies have the will to support their fellow human beings’ struggle for freedom—no matter where they live—rather than simply defending their own frontiers.