What Next for Human Rights in Iran?

At an October 29 event in Washington, a panel of experts discussed recent human rights abuses in Iran, the future of U.S. policy toward the country, and how to press for improvements in Iran's performance. 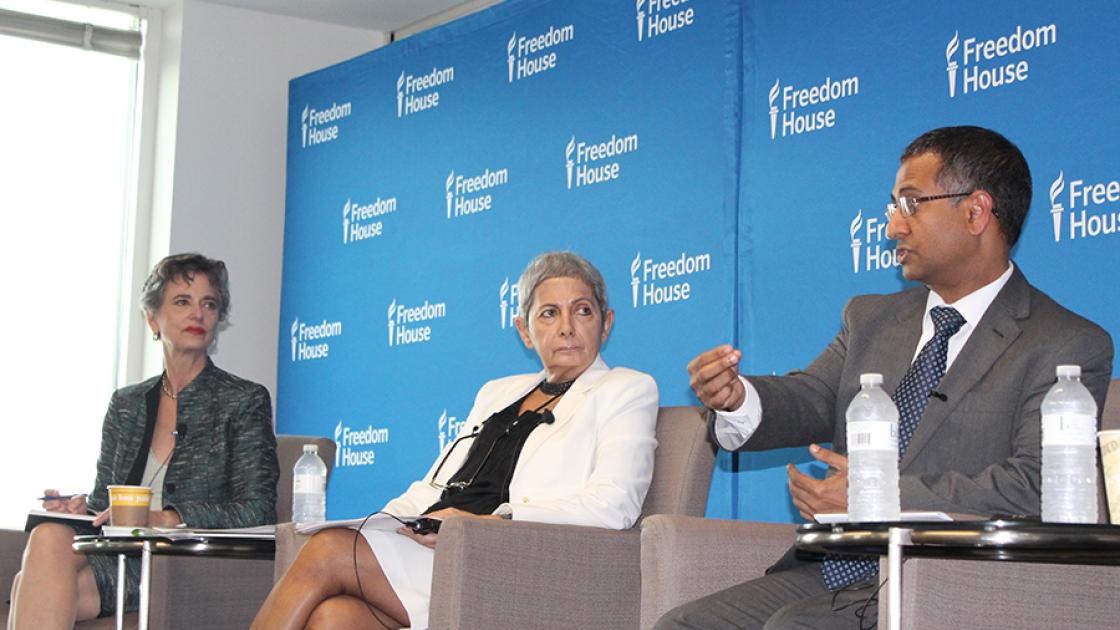 At an October 29 event in Washington, a panel of experts discussed recent human rights abuses in Iran, the future of U.S. policy toward the country, and how to press for improvements in Iran’s performance.

Panel members included Ahmed Shaheed, the UN Special Rapporteur on the Situation of Human Rights in Iran; Mehrangiz Kar, an Iranian lawyer and human rights activist; Daniel Calingaert, executive vice president of Freedom House; and Barbara Slavin, nonresident senior fellow at the Atlantic Council and moderator of the event. The following are edited excerpts from their discussion.

Moderator: I’m interested to get recommendations as to what is the best way to advance human rights in Iran without making the regime even more defensive and decide to throw more people in jail than it already has.

Ahmed Shaheed: There is, in my view, the possibility of a space for the government of Iran to work with the UN and the rest to advance human rights. But it is also important to look at the facts on the ground; to work with evidence, not then simply hope and aspiration…. President Rouhani may still have this rhetorical commitment to the reform in place; he may still be taking some baby steps, but, by and large, the overarching message I get is a worsening situation on the ground.

I describe it as an unprecedented assault on the right to life in the country. For the past six years, there’s been an exponential rise in executions in the country; if we go back, say, six years, the number of executions was below a hundred, but now it’s going up, and I anticipate, given current trends, unfortunately, the figure will exceed a thousand by the end of this year…. What is even more worrying is that about 70 percent are for non-homicidal offenses. They’re for drug offenses, which doesn’t include intentional killing. Therefore, clearly illegal in international law. And I’ve also observed the past couple of years a number of juvenile offenders executed: three this year, nine last year, and scores more on death row, so this is a very, very worrying scenario.

A lot of the challenges Iranians face on human rights can be routed to a deeply flawed judiciary system. Frequent reports of unfair trials underscore that challenge. There are very frequent allegations, credible ones, of trials based on evidence obtained under torture.

Another area of concern is the narrowing space for civil and political rights, especially Iran’s dubious distinction to being a country with one of the highest number of journalists and bloggers in detention. Forty, mid-forties, is a figure, has been there throughout the five years I have been observing…. With [parliamentary elections scheduled for early 2016], I have observed a rise in persecution of journalists. Now forty-six, forty are deceiving figures because Iran appears to have a revolving-door policy of bringing in journalists for a time, harassing them, charging them, detaining them, and then releasing them under some sort of caution and bringing another batch in. So the actual number of journalists cannot be given.

Moderator: How do you see this from a U.S. foreign policy perspective?

Daniel Calingaert: The starting point is that U.S. criticism of human rights abuses in Iran was somewhat muted during the negotiations on the nuclear deal. Now that the deal is concluded, it’s all the more important for the U.S. to be outspoken and show leadership on this issue. And indeed, there is a risk that if the U.S. continues to stay muted, that will send the wrong signal, that the U.S. is perfectly fine with business as usual.

The most effective place to start would be through multilateral efforts, particularly through the UN, starting with the resolution before the Third Committee of the General Assembly next month, doing all we can to drum up support for a strong resolution. Looking ahead to the UN Human Rights Council session next March, it’s critical to renew the mandate of the special rapporteur. We would like to see stronger resolutions with benchmarks that are very clear on what the expectations are to truly address human rights conditions in Iran, starting with release of political prisoners. I’d also like to see the secretary general weigh in a bit more strongly with Iran to allow Dr. Shaheed to finally enter Iran and be able to interview more people in person there and investigate the situation.

Two other policy proposals I would put out there: I think it’s time to consider a UN commission of inquiry.

Moderator: How would that advance beyond the special rapporteur? A UN commission of inquiry, what does that imply?

Calingaert: It raises the stakes. It makes it a higher profile issue at the UN, and if … done right, it would look at a prolonged period of human rights abuses. In other words, part of the rationale for having it is that it can go back to looking at abuses from the 1980s, understanding that the people responsible have enjoyed impunity and still do.

Also, the U.S. government should consider adding more individual Iranian officials to the visa-ban list, and maybe even impose asset freezes where warranted. There is an executive order in place, there is already a list, and this predates the nuclear agreement. This would at least convey the idea that individual accountability matters, that the U.S. on its own can’t do it, but at least if there’s some small measure to address impunity, we can take it. And I think what indications are available show that this really gets the attention of Iranian officials, and I think specifically of a case that went before the European Court of Justice in the spring, where two senior officials challenged the visa ban, the European visa ban and asset freeze.

Moderator: This is obviously a particularly sensitive time where the hard-liners are trying to claw back some of the power that they feel they’ve lost because of the nuclear deal. What would be your sense of the best strategy in the next few months and then after the elections?

Kar: We can’t be hopeful about the human rights situation of Iran after this deal, but we can see that very important hard-liners in Iran are worried about this deal and probably they are planning for doing something against the rights of the people, because they couldn’t stop this deal and stop this agreement. This is my concern now. Because now we hear that somebody is kidnapped, and nobody has any news about him. And we know that someone is disappeared, and we don’t have any news about what’s going on with him. I think these are reactions to the nuclear agreement…. Without the support of the supreme leader, the nuclear agreement was not possible. But we cannot understand why the supreme leader doesn’t stop these hard-line groups that are working with the money of government, the money of the Revolutionary Guard, with the money of the budget of the government, they are working against the rights of people…. The political situation is changed, and we cannot deny that…. We have to manage this new political situation, and now we don’t have any chance for that. We don’t have a very powerful leader for human rights, not inside the country and not outside the country. And this is a problem.

Shaheed: Iran came to this nuclear deal not because of the goodness of their hearts, I think they were compelled to come into it due to reasons that are quite evident to others.

At the end of the day, no country will be able to deny a legitimate human right if the world actually cares and wants to look into it. What I want to see is greater focus on Iran after the deal and not a step back.

Calingaert: I would stress the importance of dialogue as a means to an end. I think it’s important through the resolutions, through the communications at the UN, at the highest level, that everyone remains clear on what the objectives are. There are clear benchmarks. Dr. Shaheed, you have pretty much all of the recommendations in your last report. They ought to be the benchmarks. It is pretty clear what Iran needs to do to respect international standards on human rights and that should be the guiding light on this effort.