Raising human rights concerns on his first trip to China (or failing to do so) will send a strong message. 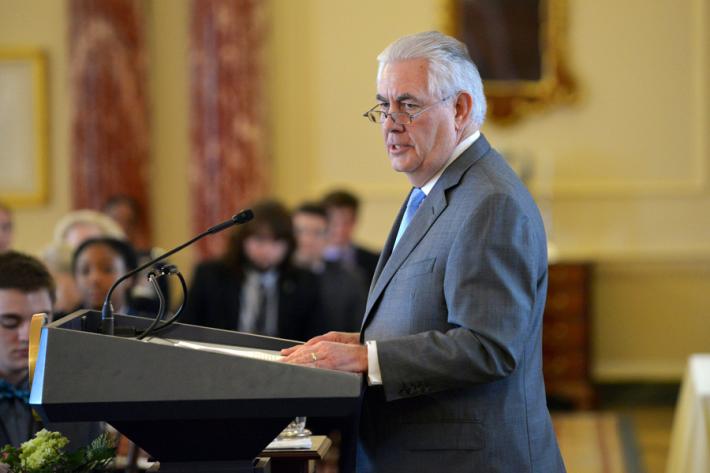 Raising human rights concerns on his first trip to China (or failing to do so) will send a strong message.

This article originally appeared in The Diplomat on March 14, 2017.

U.S. Secretary of State Rex Tillerson’s first trip to China this week will set the tone for the U.S.-China relationship under the Trump administration. It is critical that he raise human rights as a core U.S. principle, as a matter that directly affects American businesses and nonprofits, and as a strategically important symbol of U.S. resolve, signaling that the administration will not simply acquiesce to the Chinese government’s long-standing insistence that Washington has no right to question the country’s dreadful record of political repression.

Raising human rights at this juncture is especially important for three reasons:
It demonstrates change: While past administrations have addressed China’s human rights abuses in certain forums, they have typically prioritized other aspects of the U.S.-China relationship, such as trade or regional security. The Obama administration notably failed to convey a clear message in its first encounters with Beijing that human rights would be important to bilateral ties.

It protects U.S. interests: Support for human rights in a country of China’s global importance is not just a reflection of fundamental American values, but also directly affects U.S. economic, political, and security interests.

It has a real-world impact: Raising these issues — especially at the level of the secretary of state — can influence the actions and policies of the Chinese government. Even when Chinese officials appear to dismiss human rights arguments, expressions of U.S. concern have been known to tilt their cost-benefit calculations in the direction of better protection of basic rights, ultimately saving lives.

There are four points in particular that Tillerson should raise during his trip.

1. Internet censorship and U.S. businesses: The United States should express strong concern about the economic implications for U.S. businesses — inside and outside China — of Chinese government restrictions on basic freedoms, particularly Beijing’s policies of internet censorship and control. Harmful practices include the arbitrary blocking of U.S.-based internet services, requiring U.S. businesses to host user information within China, and subjecting U.S. firms to intrusive inspections by security agencies.

2. Religious persecution: The United States should raise objections to ongoing — and in some cases escalating — Chinese government persecution of Christians, Muslims, Tibetan Buddhists, and Falun Gong practitioners. A recent Freedom House report found that such religious repression is backfiring, undermining the legitimacy of the Communist Party of China and threatening China’s economic, political, and social stability. Tillerson should urge the Chinese government to release religious prisoners, loosen the regulatory framework, and expand the space for peaceful religious practice and belief.

4. New law on foreign NGOs: The United States should reiterate its disagreement with the recently adopted foreign NGO management law, which increases controls on nonprofit groups working in China, essentially giving them the choice of working under close police supervision or closing their doors. The United States should signal it will monitor not only the law’s effects on U.S.-based nonprofits, but also with the harm it may do to Chinese civic groups working for the betterment of their society, including on vital topics like public health and environmental protection.

The symbolism of the U.S. secretary of state’s first visit to China is consequential. Foreign governments, including China’s, closely observe the actions of such high-ranking U.S. figures, looking for signs of strength or weakness. U.S. policy is most effective when it demonstrates moral leadership and firm adherence to core principles. If U.S. officials fail to raise human rights with their Chinese counterparts, it wrongly signals to Beijing and the rest of the world that human rights do not matter.

The United States should also set an example in matters of transparency. Tillerson’s decision to embark on his first trip to Asia without the usual presence of the full press corps is unfortunate, forfeits reporting on his meetings to Chinese state media, and indirectly legitimizes the Chinese government’s own information controls. Rather than mimicking the Chinese leadership’s aversion to media scrutiny, U.S. envoys should push Beijing toward democratic standards. A government in China that respects the inherent rights and fundamental freedoms of all people would strengthen Chinese society and foster a sincerely cooperative U.S.-China relationship that benefits both countries.

Sarah Cook is a senior research analyst for East Asia at Freedom House and author of The Battle for China’s Spirit: Religious Revival, Repression, and Resistance under Xi Jinping. Annie Boyajian is advocacy manager at Freedom House.