Why Is a Militia Monitoring Ukraine’s Presidential Election? 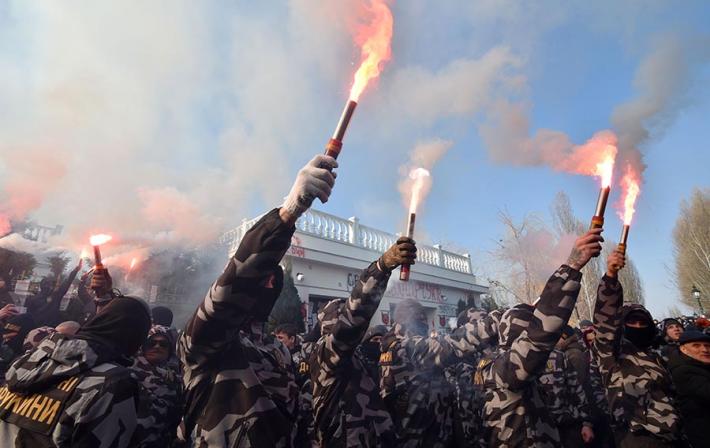 Ukraine’s Central Election Commission has registered 139 Ukrainian civil society organizations and 14 international missions as official observers for the country’s March 31 presidential election. They will play an important role in monitoring the campaign and the voting to ensure that Ukrainian citizens are able to choose their next president in a fair and transparent way.

However, among the observers are several suspicious entities that are registered as civil society organizations, including at least one group that has pledged to respond with violence to suspected voting irregularities.

Some civic monitors are odd, others are menacing

Questions about the groups registered as civic election monitors began emerging soon after the campaign officially got under way on December 31, 2018. For example, it makes sense that many party-affiliated groups are registered as observers, but why have groups such as Auto Europe Power—which advocates for lower car-import duties—or the Union of Architects of Ukraine registered to observe? The high interest in election observation could be interpreted as a positive sign of public support for the integrity of Ukraine’s elections, but with 139 civil society organizations registered this year, compared with just 10 in the last election in 2014, things are starting to look strange.

While it is unclear why such obscure groups without any clear connection to elections would be motivated to observe this year’s voting, this is far from the most concerning issue. Also among the registered election observers is Natsdruzhina, a shady paramilitary group connected with the ultranationalist factions Azov and National Corps that positions itself as a defender of “Ukrainian order” on the streets and is known for its violence against Romany people. In recent comments to Radio Free Europe/Radio Liberty, the group’s press secretary, wearing a sweatshirt emblazoned with the words “Slavonic Aggressive,” said it will follow the orders of its “commander” if law enforcement agencies close their eyes to violations. The group’s commander pledged to use violence in a Telegram channel: “People ask me, will we use force at the polls? I’ll tell you like it is: If in the interest of justice we need to kick someone in the face, we’ll do it without hesitation.”

Other officially registered observers include those positioning themselves as veterans’ groups, such as the Union of Veterans of the Antiterrorist Operation. In fact, the only requirement for organizations seeking official registration is that they describe elections and election observation as an area of activity in their charters. The All-Ukrainian Union of Fighters and Volunteers of the Antiterrorist Operation was denied observer status on January 22 because its charter did not specify election activity; however, the group updated its charter, and it was registered on January 29.

After Natsdruzhina’s threats gained public attention, the Central Election Commission on March 6 adopted a resolution calling on law enforcement authorities to ensure lawfulness and public order during the election. In a statement, the commission cited Natsdruzhina’s comments to the media as well as information it received about observer organizations that are allegedly connected to separatist forces. Minister of Internal Affairs Arsen Avakov said in January 2018 that “there is only one monopoly on enforcing the law” and “all other paramilitary groups trying to establish themselves in the streets are not legal,” but it remains to be seen what steps law enforcement agencies will take in response to the commission’s appeal.

The far-right threat to democracy

The increasing visibility and activity of right-wing extremist forces in Ukraine is a cause for concern. As noted in a Freedom House brief last year, “far-right political forces present a real threat to the democratic development of Ukrainian society,” not because they have formal political power, but because they are “aggressively trying to impose their agenda on Ukrainian society, including by using force against those with opposite political and cultural views.”

By serving as election observers or helping the police to protect “Ukrainian order,” these groups could be attempting to normalize both their ideology and their use of violence. The government has actively contributed to the normalization process, in part by awarding grants to far-right groups for “national-patriotic education projects.”

A recent report by the United States Institute of Peace warned about the threat of violence during Ukraine’s election, noting the willingness of many Ukrainians to “either tolerate or ignore the violence and hate speech perpetrated by veterans and far-right extremists” and describing an “increased tolerance for violence in Ukrainian society as a legit¬imate method of conflict resolution.” In June 2018, Freedom House and several other human rights groups sent a letter to Ukraine’s internal affairs minister and prosecutor general, calling their attention to dozens of attacks, threats, or instances of intimidation by radical groups across the country and arguing that they added to “an atmosphere of near total impunity that cannot but embolden these groups to commit more attacks.”

It is not hard to see how this dynamic could depress participation in the election. With observers connected to vigilante violence against vulnerable groups pledging to use force, and an apparent tolerance for this violence by both the government and many ordinary citizens, how can Ukrainians feel certain that they will be safe at the polls, particularly those who have been targets of violence in the past?

A need for tighter rules, stronger norms against violence

Ukraine clearly needs to rethink its rules on who can serve as an official election observer. The current Law on the Election of the President of Ukraine and the draft Electoral Code of Ukraine should require that observers agree to certain basic standards, such as the international election observation standards adopted by leading organizations in 2012. The Central Election Commission should also ensure that all precinct-level election commissions have the capacity to fully scrutinize observer applications, ensure that observers follow the law, and hold them accountable if they do not. To that end, international and foreign election observation missions, organizations, and governments should assist the Ukrainian government in strengthening the integrity of domestic election observation efforts, supporting those initiatives that comply with international standards and establishing a framework to prevent those that threaten the integrity of elections.

More broadly, the Ukrainian government and society must categorically reject any tendency to ignore violence or view it as a normal way to resolve disputes. Rather than providing tacit approval of violent right-wing extremists by supporting their activities with public funds or allowing their participation in the electoral process, the government should take decisive steps to rein them in. Credible threats of violence need to be taken more seriously and recognized for the danger they pose to democracy. The possibility that such threats could discourage people from voting in the upcoming presidential election puts this danger into especially stark relief.

Ukraine is rated Partly Free in Freedom House's Freedom in the World 2019 report.