India’s Supreme Court has confirmed death sentences for four men in a notorious 2012 rape case. But despite growing public opprobrium, a woman or girl is raped every 15 minutes in the country. 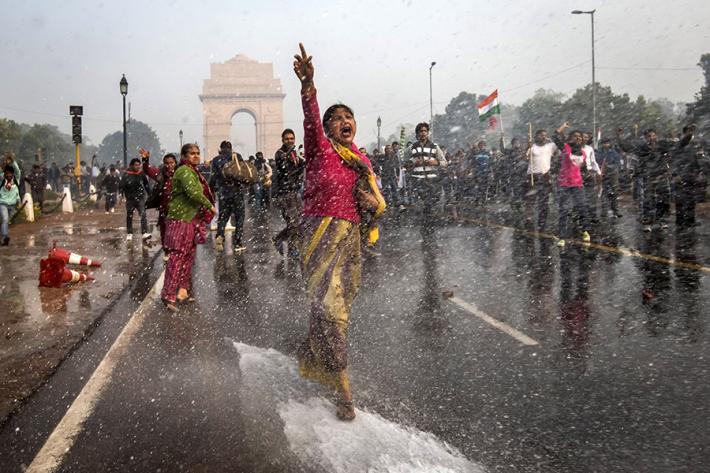 A protester chants slogans as she braces herself against the spray fired from police water canons during a protest against the Indian government's reaction to recent rape incidents in India, in front of India Gate on December 23, 2012 in New Delhi, India. Photo by Daniel Berehulak / Getty Images.

India’s Supreme Court has confirmed death sentences for four men in a notorious 2012 rape case. But despite growing public opprobrium, a woman or girl is raped every 15 minutes in the country.

It’s been nearly five years since the infamous rape, torture, and murder of 23-year-old Joyti Singh Pandey—or Nirbhaya (Fearless One), as journalists dubbed her—in New Delhi sent shockwaves throughout India. The vicious nature of the crime shattered the cultural barriers that normally restrict discussions of sex and rape, bringing the issue to the forefront of Indian news coverage and political discussions.

Thousands of people protested across the country, demanding justice for Pandey and an end to impunity for perpetrators of violence against women. Further protests and vigils have been held since then to remember the victim and push for strong penalties in the long-running court proceedings. As more rapes were reported, the public outcry shifted, calling on the government to address the broader epidemic of rape in India.

The political leadership took some steps in response to public pressure. In 2013, the Anti-Rape or Nirbhaya Act became law, mandating longer prison sentences for perpetrators of sexually based offenses. In 2014, current prime minister Narendra Modi came to power after promising to work on the issue of violence against women. Modi even raised the issue in his first speech on Indian Independence Day that year, calling for parents to take responsibility for the education of their sons instead of focusing just on their daughters. Despite Modi’s questionable record on women’s rights during his time as chief minister of Gujarat, there was hope that a combination of political will and public support would bring reforms and new policies to finally tackle the insidious problem of sexual violence.

In reality, however, very little has changed on either a political or an institutional level. When the BBC documentary India’s Daughter explored the Pandey case in detail and exposed one defendant’s stunning lack of remorse, Modi’s government opted to ban the film from airing in India. National crime statistics show that the number of reported rapes has increased substantially since 2012, by some 40 percent, but the conviction rate has apparently dropped, falling by roughly 40 percent in Delhi. In other words, increased reporting has not necessarily resulted in justice for more victims.

Furthermore, despite Modi’s 2014 speech calling for men to take responsibility for their own actions, the prevailing attitude has favored protectionism and control of women’s movements as a solution to the rape epidemic. There is no national sex offender registry. The Modi government has issued statements opposing the criminalization of spousal rape, an issue that was recently reopened by the Delhi High Court. The government also slashed plans to create “Nirbhaya Centres”—rape crisis centers where survivors could obtain medical, legal, and psychological support. Instead of creating 660 centers, with at least one for each district in India, it chose to fund only 36.

While national progress has stalled, there are signs of activity at the local level. The Delhi Commission for Women, headed by Swati Maliwal since 2015, has worked to address the backlog of police cases and uncovered a related backlog of 7,500 DNA samples waiting to be tested at the city’s forensics lab. According to Maliwal, the lack of prosecutions and convictions send the message to perpetrators that “whatever you do, you’ll somehow be able to get away with it.”

Clearly, much work remains to be done, in Delhi and throughout India. Public pressure, political will, and functional law enforcement systems all need to be in place for the problem to be properly addressed. No amount of vigils or speeches will stem the flood of new rape cases in the absence of meaningful political and judicial reform.