Why Putin Is Not Okay

A few reminders of the Russian dictator’s track record as President Trump heads to his summit in Finland. 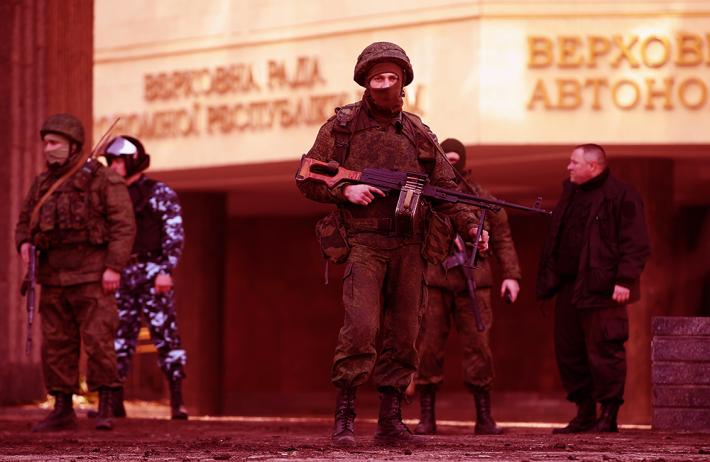 Heavily-armed soldiers without identifying insignia guard the Crimean parliament building after taking up positions there earlier in the day on March 1, 2014 in Simferopol, Ukraine. (Photo by Sean Gallup/Getty Images)

A few reminders of the Russian dictator’s track record as President Trump heads to his summit in Finland.

Last week, U.S. president Donald Trump gave his assessment of Russian president Vladimir Putin, with whom he will be meeting on July 16: “Putin’s fine.”

Listed below is a small sampling of reasons to think otherwise.

The Kremlin has been accused of a series of murders abroad. But since Putin first took office as president in 2000, Russia itself has been the scene of numerous assassinations targeting dissidents, reporters, human rights activists, and opposition politicians. The death toll among journalists alone reached 28 last year, according to the Committee to Protect Journalists. Here are some of the lowlights of this legacy.

Last month, the Russian human rights organization Memorial published a list of 50 current political prisoners and 108 prisoners held for their religious beliefs. The latter figure is expected to grow as authorities crack down on banned minority groups like the Jehovah’s Witnesses. Many more political and religious prisoners have been incarcerated over the course of Putin’s reign. Below are a few of the more high-profile cases.

Putin has shown his disdain for democracy and U.S. interests in part by supporting authoritarian regimes that have clashed with Washington on security and human rights matters. These are among the most noteworthy examples.

As part of his long-term effort to fracture European unity and the NATO alliance, Putin’s government has used disinformation and other tactics to polarize European voters. While much of this activity is covert, Russia’s ruling party, United Russia, has openly signed cooperation agreements with far-right nationalist parties and other factions seen as sympathetic to Russia or the Soviet legacy.