Why is the Russian Orthodox Church Supporting Belarus’s Embattled Leader?

In the wake of a fraudulent election and antigovernment protests in Belarus, the Russian Orthodox Church’s backing of Alyaksandr Lukashenka could cost it the trust of its congregation. 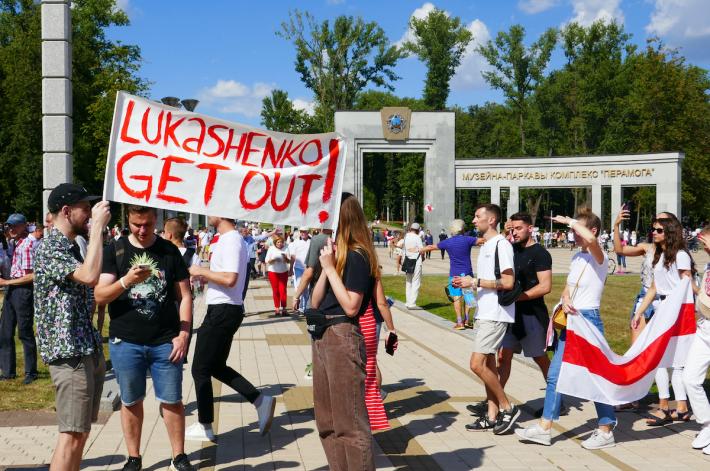 In mid-August, thousands of Belarusians took to the streets to protest against Alyaksandr Lukashenka, who claimed a landslide victory in a rigged presidential election. The unrest immediately raised questions about the response of the Kremlin—which, while perhaps not opposed to the tumult seizing its neighbor, would prefer the longtime Belarusian leader to stay put. After perfunctory postelection congratulations, Russian president Vladimir Putin waited more than two weeks before expressing explicit support for Lukashenka amid the mass demonstrations, vowing that Russia would step in if the embattled leader lost control of the situation.

However, another powerful player in Russian politics—the Russian Orthodox Church (ROC)— quickly made clear its support for Lukashenka’s regime. In the election’s immediate aftermath, Patriarch Kirill, the ROC leader, issued a statement congratulating Lukashenka, praising him for his devotion to Orthodox congregations, and encouraging the “fruitful interaction between the state authorities and the Belarusian Exarchate.”

The ROC’s backing of Lukashenka is likely motivated by the Moscow Patriarchate’s desire to maintain its religious authority in the region, as well as its traditional support of Russia’s geopolitical interests. However, its choice to back the Belarusian leader despite the ongoing, popular protest movement against him could result in the loss of its congregation’s trust, and damage ROC’s reputation in Belarus.

Orthodox Christianity is popular in Belarus, and Lukashenka has generally maintained friendly relations with the ROC during his 26 years in power. Of the 25 registered religious denominations in Belarus, Orthodox Christianity is the largest: approximately 53 percent of the adult population belongs to the Belarusian Orthodox Church (BOC), which as an exarchate of the ROC is subordinate to the Moscow Patriarchate and Patriarch Kirill, who oversees the world’s largest community of Orthodox Christians. Belarusian law recognizes the BOC’s “determining role” in the development of the spiritual, cultural, and state traditions in Belarus; moreover, the BOC is the only religious institution to receive state subsidies, and benefits from dozens of cooperation agreements with Belarusian state agencies.

In light of historically good relations between Lukashenka and the ROC, Kirill’s warm remarks after Belarus’s election were not surprising. But in a more consequential signal of support for Lukashenka, the Moscow Patriarchate ousted the BOC leader, Metropolitan Pavel, after he sent mixed messages about the election results and failed to impart the ROC’s stance to BOC clergy. Pavel had initially congratulated Lukashenka on an electoral victory, but later apologized and met with a delegation of Christian protesters. Later, in another reversal, Pavel attempted to appease Belarusian authorities with a statement criticizing BOC leaders and clergy who had publicly supported protesters, denounced electoral fraud, or criticized postelection violence and Lukashenka’s regime.

Pavel was replaced by Metropolitan Veniamin, who had previously spoken out against “mass riots” and demanded a return to stability in the country. Several days later, Kirill publicly wished Lukashenko a happy birthday and again expressed his desire for continued cooperation between the ROC and Belarusian state apparatus. The birthday remarks came less than three weeks after the Belarusian security forces viciously beat and detained hundreds of peaceful protesters, and stood in stark contrast to the statement of the head of the Belarusian Catholic Church, who urged the authorities to “stop the violence and immediately release all innocent civilians detained at peaceful rallies.”

The ROC’s choice to publicly support Lukashenka could be explained by the place it occupies in Russian politics. Since Putin’s ascent to power, the ROC has become fully dependent on the Kremlin. While this has benefitted the church’s leadership in the short term, it has also weakened its institutional legitimacy domestically. On one hand, the Russian government’s ongoing support allows the ROC to hide its income, receive state assistance, and outcompete other religious communities in Russia. On the other, this dependency has a steep price: the ROC must follow Putin’s geopolitical and domestic directions, even if these policies contradict the Church’s traditional teachings of compassion, fairness, and patience.

For example, the ROC has spoken in favor of Russia’s involvement in Syria and Ukraine, linked the promotion of human rights to “heresy,” and backed the government’s rushed production of a poorly tested COVID-19 vaccine. While the ROC’s deeply conservative leadership may approve of Putin’s antiprogressive policies, the church’s unwavering support for the regime has unquestionably damaged its reputation among Russians. A recent survey by the Levada Center found that public trust in the ROC has been deteriorating since 2012. The results of another survey showed that two thirds of respondents believe that the church should not be involved in political issues.

The ROC has also been struggling to maintain its hold over the post-Soviet Orthodox community, so its support of the relatively friendly Lukashenka regime could also be an attempt to retain its influence in the region. For example, the Moscow-Constantinople schism, caused by the Ecumenical Patriarchate’s decision to grant independence to the Orthodox Church in Ukraine, greatly reduced the ROC’s influence in Eastern Europe; after the Ecumenical Patriarchate of Constantinople, the spiritual authority of the world’s Orthodox Church, granted independence to the Ukrainian Church despite ROC’s protests, the Moscow Patriarchate lost as many as 500 parishes in Ukraine. The separation of the Ukrainian Church, which had been under Moscow’s jurisdiction for over 300 years, caused an uproar among Russian politicians and religious authorities, and represents one of the greatest Orthodox schisms in history.

To the ROC’s and Kremlin’s dismay, the separation of the Ukrainian Church also set a precedent for other regional Orthodox institutions seeking to gain independence from the Moscow Patriarchate. For example, there has been ongoing competition between the ROC and the independent Romanian Orthodox Church in Moldova, with the latter gaining popularity over the last 15 years. The ROC is dealing with similar issues in Latvia and Lithuania, where local politicians have begun to question its authority, and have passed laws that restrict Moscow’s influence over Orthodox dioceses. In contrast, Lukashenka’s relative lack of involvement in the ROC’s internal affairs and refusal to register “alternative” Orthodox communities in Belarus allows the Moscow Patriarchate to maintain power over the Belarusian congregation, and avoid competition.

The price of power

By choosing to support Lukashenko, the ROC has backed itself into a corner. When protests in Belarus erupted, the leadership decided to back a man who could help advance Russia’s interests and allow the church to maintain its influence in the country. However, the move to support a foreign authoritarian leader exposed the ROC’s dependency on the Russian government, and showed that this supposedly self-sufficient institution functions as one of the Kremlin’s political tools, rather than an independent spiritual entity.

As a result, the ROC damaged its own credibility in a region where it is already struggling to maintain its religious authority. If the ROC wants to preserve its power in Belarus and other post-Soviet states, it should stop taking part in Russia’s geopolitical games. Instead, it should go back to its original teachings and support people who advocate for peace, justice, and unconditional love for their neighbors.

The author’s last name has been withheld to protect family members in the region.

After Lukashenka: Healing a Divided Country