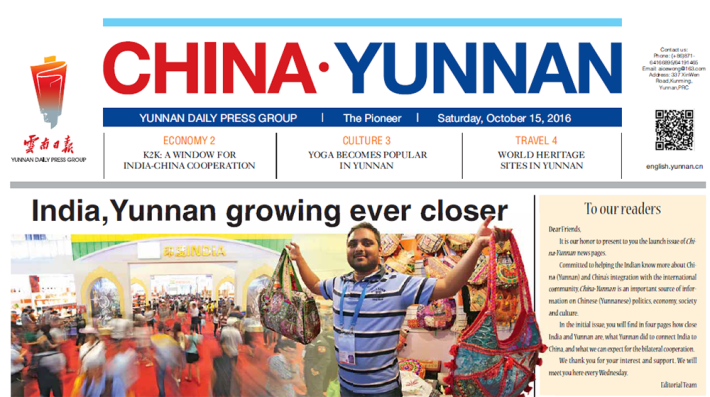 This new four-page weekly insert by the Chinese state media outlet Yunnan Daily in India's 152-year-old Daily Pioneer is one of many recent examples of Chinese propaganda and censorship extending beyond China's borders.

This article was published in The Diplomat on November 3, 2016.

The Communist Party of China (CPC) has extended its control over media and information beyond China’s borders for at least decade now. But occasionally there is a spike in international censorship and propaganda activity that offers fresh insight into how the long-term process is unfolding. One such uptick occurred over the past three months. A review of over two dozen incidents and news reports on this theme emerging since September indicates that private citizens and nongovernmental institutions are playing a growing role in advancing Beijing’s agenda, through either active promotion or passive concessions.

A first critical group of nonstate actors involved in amplifying the CPC message are nationalist Chinese internet users whose comments, indirectly shaped by state media narratives, may result in economic reprisals against Hong Kong, Taiwanese, and foreign celebrities and brands that are perceived to have supported causes despised by the CPC. In late October, Taiwanese actress Irene Chen was removed from a Chinese film in mid-production after netizens dug up Facebook remarks from 2014 in which she backed Taiwan’s Sunflower protest movement against growing Chinese media influence on the island. The internet users said they would refuse to watch a film whose star they accused of backing Taiwanese independence. British cosmetics brand Lush came under similar fire earlier in the month, after it was reported to have supported a group campaigning to end human rights abuses in Tibet. Reflecting some Chinese netizens’ sentiments, one user wrote, “Tibetan separatism supporter, please get out of the Chinese market.”

A second influential group comprises wealthy Chinese entrepreneurs with close ties to party leaders who are increasingly investing in media and filmmaking industries outside mainland China. Two of the most prominent businessmen, Wang Jianlin and Jack Ma, recently announced new financing, production, and dissemination deals with Sony Pictures and Steven Spielberg’s Amblin Partners, respectively. It remains to be seen whether they will use their newfound economic leverage to implement content changes favorable to the CPC, but past experiences involving Beijing-friendly media owners suggest that such adjustments are only a matter of time.

Lastly, members of overseas Chinese communities themselves have taken part in blatant displays of pro-CPC sentiment. These include an initiative in Australia to hold concerts glorifying Mao, a gala in Californiato celebrate Mao’s Long March, and an anti-Dalai Lama protest in Milan. Australian lawmaker Sam Dastyari resigned from the Senate leadership in September over a scandal dubbed “cash for comment,” in which he was accused of publicly backing Beijing’s position on the South China Sea in exchange for political donations from Chinese-Australian businessmen with close CPC ties.

A series of other actions that were criticized by free expression and democracy activists entailed less clear influence from Beijing but nonetheless served to promote its narratives. These included a decision by Bloomberg News to remove the online version of its award-winning 2012 investigation into the assets of Xi’s relatives; the 152-year-old Indian newspaper Daily Pioneer’s introduction of a customized four-page weekly supplement from the Chinese state media outlet Yunnan Daily; and Vancouver’s mayor donning a red scarf and flying the Chinese flag at city hall in a display with obvious pro-CPC overtones.

Democratic societies, with their emphasis on an open exchange of information and opinions, are vulnerable to intrusive, state-sponsored propaganda efforts that present themselves as just another, equally valid perspective. Similarly, attempts at transnational censorship exploit democracies’ culture of civility, in which speech deemed “offensive” to a given group or community is avoided whenever possible. But a firm and thoughtful adherence to the principles of transparency, freedom of expression, and freedom of association is often enough to resist Beijing’s attempts to impose its will overseas.

Indeed, in another notable set of incidents over the past two months, international actors have successfully rebuffed pressure to self-censor, opposed censorious decisions, or tackled news topics that are sensitive to Beijing. Slovakia’s president and 50 Czech parliamentarians met with the Dalai Lama, and the Milan government granted the Tibetan spiritual leader honorary citizenship despite protests from Chinese authorities. India’s federal government confirmed the Dalai Lama’s right to travel freely within the country, including to a region that China claims is disputed territory. And in September, a popular Australian news site ran a three-article investigative series about the torture, brainwashing, and apparent killing for organs of Falun Gong prisoners of conscience in China. Meanwhile, media outlets, human rights groups, and some politicians around the world condemned the cowardly treatment of Hong Kong democrats by officials in Thailand and New Zealand.

Some policymakers have taken steps to respond more systematically to Beijing’s growing influence. In September, 16 members of the U.S. Congress urged the Government Accountability Office to consider expanding reviews of foreign investments given “concerns about propaganda and control of the media.” In Australia, following the Dastyari scandal and media investigations showing that Chinese businesses are the largest source of foreign money in the country’s politics, some lawmakers have called for a ban on foreign political donations, which are currently legal.

These policy suggestions highlight the fact that Beijing’s influence on the global information landscape often depends on raw economic pressure and incentives. Individuals and institutions in democratic countries can respond effectively by shining a light on the operation of such leverage, preemptively setting rules to protect free expression, and speaking out in defense of their own societies’ fundamental values. The CPC will no doubt continue its transnational censorship and propaganda efforts, but at the very least, those living in democracies can refuse to do the party’s work for it.