Women’s Rights in Saudi Arabia: Hala Aldosari on Reform and the Future 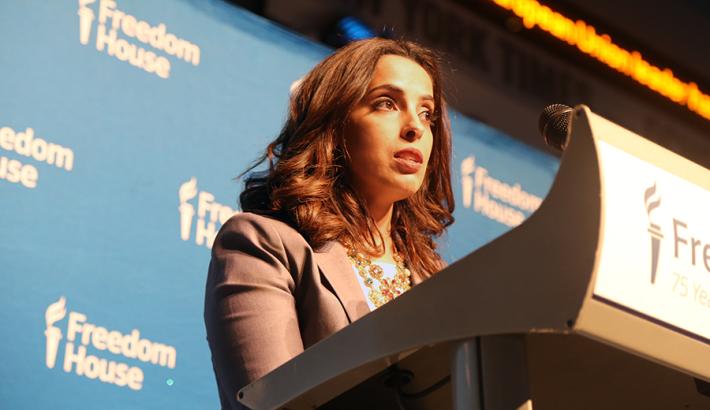 Dr. Hala Aldosari, honored by Freedom House on May 24 as co-winner of its 2016 Freedom Award, is a Saudi women’s rights advocate whose work on behalf of women is nearly without precedent in the kingdom. A researcher on women’s health issues including domestic violence, Aldosari talks here about prospects for significant social reform.

Hala: The new king has not done any reforms for women’s rights. He is one of the hard-liners, as he was as a governor of Riyadh Province. I don’t think he has any interest in women’s issues. But will there be any changes? I think there will.

It’s largely because of economics. The government faces the challenge of needing to find more revenue. It needs more people working in the private sector and then to generate more revenue in taxes. The most promising human capital is the kingdom’s women. It is easier to target women for certain jobs, particularly those that have been filled largely by foreigners and require minimum skills, such as retail jobs. So I expect women will begin to have a larger presence in the labor market. But, again, this is because of the drive and need to reform the economy, not because of political efforts to reform women’s position.

There will also be more women on the Shura [the advisory council that can propose laws to the king]. Those women who are already on the Shura have really pushed the envelope in the three years they’ve been members.

There will be change because of the need to reform the economy, globalization, and international pressure. This will not necessarily be happening because of the political will of the rulers, but the changes will allow women to have more choices.

That outlook sounds better than the present.

It might take 10 to 20 years for a larger number of women to play a major role in the state.

What kind of pressure would get the attention of the ruling family?

It’s important to have the voices of Saudi women in the media. The kingdom is also very sensitive to criticism of Saudi Arabia in the UN Human Rights Council, other parts of the UN, and by international NGOs. All of these commentaries have made the public more aware of what’s happening in Saudi Arabia. And because of that, officials find it hard to refute the criticism. They can’t deny them. And at the same time they have to come up with explanations as to why the restrictions on women still exist.

We are the only culture that enforce segregation by gender everywhere. It has no justification in religion…. Women who have reached high positions, like those on the Shura, or those in universities, are useful for the government to present as examples of its good governance. But their situation can’t be generalized to all women. These “successful” women were handpicked to be in positions in power. In reality, they are still required to have a male guardian. Their privileges could be withdrawn at any time.

What is holding things back?

When almost all the revenue came from oil exports, the government did not have to look at human capital. It was easy for the government to be close to religious authorities, to maintain its claim on the Islamic identity of the state. Part of that was to keep women in same position as they had in early Islam. Women were not supposed to be on their own.

The alliances with the religious hard-liners, who have a narrow view of the rights of women, gave the ruling family its legitimacy…. The government is trying to show that the ruling family is on the hard-liners’ side, by keeping women in their position. If the government allows women to drive, to get the identification documents on their own, or travel without permission of a male, it will upset all of those hard-line forces.

The government doesn’t realize it can have an alliance with more moderate forces of society; it may even be a “silent majority”—educated families. But the government is very worried about the religious leaders, as they have the ability to mobilize the masses, and they are traditionally the source of the most violent political opposition movements.

They are very much informed of what we call for or what we do. I have personally met with the interior minister…. They are well informed about the troubles faced by women. But Prince Mohammed bin Salman has a role: to fix the economy without touching the foundation of society…. They believe they need to keep their Islamic identity and thus the role of women untouched as much as possible.

I believe there is an agreement between the crown prince and deputy crown prince. They are not supposed to touch the social issues…. They know that women’s issues are the most contentious issues with the religious hard-liners, and they don’t want to be in conflict with religious hard-liners—not now. Women are not part of the vision for change, except as people joining the workforce and generating revenues.

What advice would you give women in the kingdom?

For the elite women who have had the opportunity to be educated, I would advise them to use their positons to help other women. And for those who are not as empowered, to seek some type of work, since having work and money changes your position in your family. It grants you some influence. And I would ask all women to be critical, to examine the narrative of their society—to examine things, to see the fallacies, to see the world through new lenses, not through traditional, male lenses. And not to be shy to speak about violations and injustice. This is one of the most important things—to not feel that they represent a family or a state, but their own needs and aspirations. Speak out, speak to the media, even if you choose another name. We need to make our voices part of the country’s main debate.