World Cup: Democracies Excel in a Contest of Fair Play

Host nation Russia and its authoritarian ilk are unlikely to go far against even the smallest democratic powerhouses. 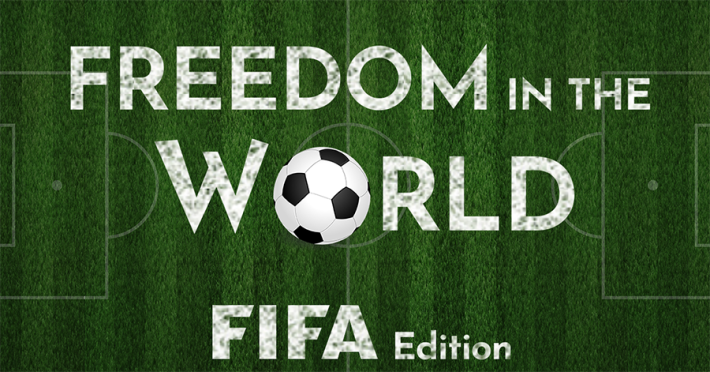 Host nation Russia and its authoritarian ilk are unlikely to go far against even the smallest democratic powerhouses.

Every four years, billions of people come together to watch the best of the best play “the beautiful game” for the ultimate title, champions of the world. To even participate in soccer’s World Cup, each national team must compete in regional qualifying matches over an 18-month period, and then the top teams from each grouping take the field for an intense and grueling month of tournament play. To advance to the final rounds, a team’s entire roster must display physical stamina, mental acuity, and a delicate balance of collective effort and individual skill.

As with past World Cups, there is evidence this year that successful teams are more likely to emerge from democratic countries than authoritarian states. The chart below indicates that those with higher scores in Freedom House’s Freedom in the World report also tend to have better rankings from FIFA, the international soccer federation.

It remains unclear what exactly gives democracies an edge, but democratic governance lends itself to open, rules-based competition that produces better and more stable outcomes, allowing citizens to flourish with minimal state control. By contrast, authoritarian governance features unscrupulous concentration of power, poor allocation of resources, and weak, dysfunctional institutions, which can tilt the playing field in both politics and business.

But this hasn’t stopped the authoritarian states from trying. The World Cup competition opens on June 14 with the host nation, Russia, facing Saudi Arabia in Moscow, putting a spotlight on two regimes with no respect for democratic values and poor human rights records. As their teams prepare to open the tournament, a Ukrainian filmmaker, imprisoned in Russia after its illegal annexation of Crimea, is on a hunger strike demanding the release of other political prisoners. Meanwhile, authorities in Saudi Arabia recently arrested several women for advocating against the male guardianship system despite the crown prince’s pledge to implement social reforms in the country.

However they fare against one another, the teams representing countries rated Not Free by Freedom House have only the slightest chance of taking home the trophy. Rounding out the worst performers with Russia and Saudi Arabia are Egypt, where the regime’s continued crackdown on civil society is designed to suppress discussion of its many governance failures and worsening living conditions for citizens, and Iran, where protests by frustrated citizens earlier this year led to thousands of arrests.

We should all look forward to the day when these troubled countries join the top ranks of both democracies and World Cup competitors. Some of their teams may even defy the odds this year and provide an outlet for fellow citizens watching at home to revel in victory despite their repressive governments, which would likely sour any celebration by attempting to exploit it for their own political ends.

At a time when democracy is suffering from a global crisis of confidence, we should also take a moment to welcome an example of leadership by the world’s freest societies. Perhaps they will encourage fans in less fortunate states, not least in Russia itself, to demand from their rulers more of the sort of fair play they see thriving on the field.