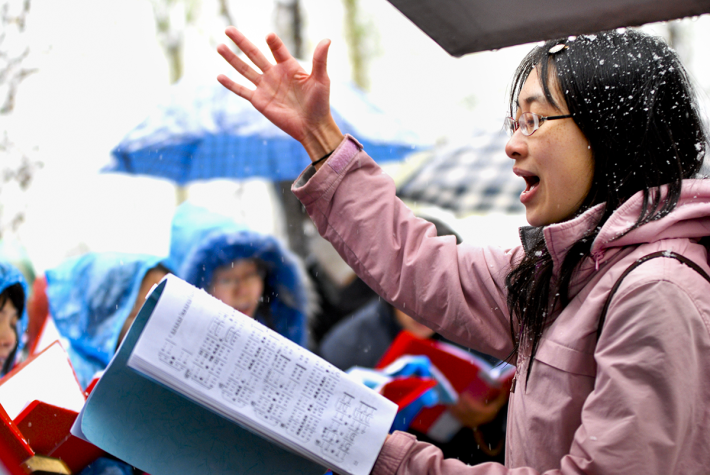 A woman sings hymns with fellow congregants from Beijing’s unofficial Shouwang church, who were meeting outdoors in 2009 after being evicted from their place of worship. Credit: Beijing resident.

A February 2017 Freedom House report—"The Battle for China’s Spirit”—examined the evolution of religious revival, repression, and resistance within China after Xi Jinping assumed the leadership of the Chinese Communist Party (CCP) in November 2012. The comprehensive assessment across eight major faith groups found that controls over religion had intensified under Xi and were seeping into new areas of daily life. At least 100 million people were estimated to belong to religious groups facing “high” or “very high” levels of religious persecution.

Despite that already dire picture, the situation since 2017 has continued to deteriorate, dramatically for members of some religions. Hundreds of thousands of Muslim believers in Xinjiang have been detained en masse for “re-education” or transferred to forced labor facilities. Even religious groups that from 2012 to 2016 experienced relatively low levels of religious persecution—like Chinese Buddhists or Hui Muslims—have faced tightening restrictions and expanding destruction of places of worship. Members of other faith communities that were encountering more optimistic trajectories despite ongoing persecution—like Catholics or Falun Gong practitioners—have found themselves at the receiving end of more attention from the security forces.

Several dynamics at both the national and local levels may explain worsening religious persecution in China. First, religious groups have not been exempt from a broader tightening of CCP control over civil society under Xi Jinping. New religious restrictions imposed in recent years bear markers of Xi’s particular mode of authoritarian governance: a “rule by law” emphasis on legislation, expanding grassroots security force presence, and the use of criminal penalties to rein in social media activity.

At the same time, certain government initiatives appear to be responses to developments in particular religious communities. Increased pressure on Catholics to join state-sanctioned churches and the detention of some underground clergy has followed a historic 2018 agreement between China and the Vatican on the appointment of bishops. In other cases, growing popularity of a particular faith or institution has triggered a backlash from the CCP, as demonstrated by growing restrictions on Protestant churches and tighter controls over the influential Larung Gar Tibetan Buddhist Academy.

In Xinjiang, the role of individual officials seems to have been especially influential. Chen Quanguo, the party secretary in Xinjiang since 2016, has been a key driving force in the intensification of repression and securitization in the region, drawing on previous experience in Tibet. But he is not alone. At least three other officials in Xinjiang, or who direct policy towards the region from Beijing, have experience in Tibet or in similar “transformation” campaigns targeting Falun Gong adherents. Leaked documents indicate that Xi Jinping himself laid the groundwork for the use of harsh tactics in the region, instructing officials in a series of private speeches to show “absolutely no mercy.”

Internal party struggles and geographic variation add another layer of complexity. As cadres pushing for a more assimilationist ethnic policy edge out those favoring relative cultural autonomy, restrictions on Tibetan Buddhism and Islam have increased. Meanwhile, Falun Gong practitioners in some regions have benefited from the purge on corruption charges of top security officials who had overseen the anti-Falun Gong effort, with local officials taking a more lenient approach. But in provinces like Liaoning, security forces in 2018 nevertheless renewed campaigns to identify and intimidate residents who continue to practice the spiritual discipline.

Technological advancements have also opened up an array of new options for the regime to control religious practice and detect dissent. The past eight years have featured the proliferation of smartphones, ubiquity of applications like WeChat, expansion of facial recognition enabled video cameras, and emergence of a variety of databases for consolidating information on “key individuals.” These technologies have been specifically deployed to monitor and punish religious activity in ways that would have been impossible a decade ago.

Lastly, intraparty incentives—such as criteria for promotion and de facto impunity for violence against perceived party foes—generally reward repressive actions and empower parts of the party-state apparatus that engage in violations of religious freedom. Just as Chen Quanguo was overseeing the early phases of mass detention of Muslims in Xinjiang, he was promoted in October 2017 to the powerful CCP Politburo. Such inducements encourage officials to rely on repressive rather than rights-based policy options when considering how to handle religious affairs.

U.S. government action has, in some respects, tracked the worsening conditions for many religious believers in China. Various officials have taken previously unprecedented steps to support religious freedom in China.

Last summer, President Donald Trump and Vice President Mike Pence met with advocates for and relatives of Uighurs, Tibetans, Christians, and Falun Gong practitioners jailed in China. In October, a coordinated effort by the State and Commerce Departments led to visa restrictions for Chinese officials and the addition of 28 Chinese governmental and commercial organizations to the Entity List, thereby constricting access to the United States or exports to those implicated in human rights violations against Muslim minorities in Xinjiang. Congress is also considering legislation—the Uyghur Human Rights Policy Act—that would guarantee even stronger action in response to the severe situation in Xinjiang.

Still, given the scale of religious persecution in China, as well as the worsening trajectory, more needs to be done. Congress should immediately pass this bill and the president should sign it into law. Even before its passage, Global Magnitsky and other applicable sanctions can and should be imposed on Chinese officials who have been involved in torture, sexual abuse, and deaths in custody of religious prisoners from across China. Additional resources should be devoted to better enforcing rules barring the importation of products made from prison labor, given the use of Uighurs, Falun Gong detainees, and other religious prisoners for forced labor in Xinjiang and other parts of China. And more efforts should be made by government officials and religious communities to support and protect survivors of persecution and relatives of victims in China who have fled to the United States.

The human cost of the CCP’s controls and abuses is overwhelming. With each passing day, more Chinese citizens are swept into the party-state’s repressive apparatus. Families are torn apart, injuries and psychological damage are inflicted, and lives are lost. The impact of these dynamics reaches far beyond the realm of religious policy, deeply affecting China’s overall legal, social, political, and economic environment.

But even under such conditions, millions of religious believers defy official restrictions or engage in some form of direct protest, at times scoring significant victories. Serious, targeted policy measures by the United States and other democratic governments offer them both hope and critical support in their daily battle for China’s spirit.

This article was first published by Berkley Center for Religion, Peace & World Affairs at Georgetown University on March 16, 2020.