Zimbabwe’s Coup Has Not Set It Free

Zimbabwe's military and its political allies hope to preserve their own positions in an authoritarian status quo. 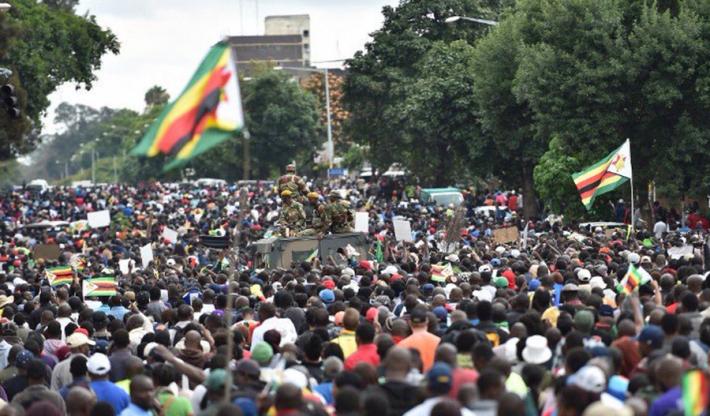 Zimbabwe's military and its political allies hope to preserve their own positions in an authoritarian status quo.

Last week, Zimbabwe had a very polite coup. It started when a relatively small number of armored troop carriers rolled into the capital for the start of “Operation Restore Legacy” and was confirmed by a carefully prepared predawn announcement from the army spokesperson on state television. Liberation music interspersed with the same repeated message became the order of the day as the military began to round up cabinet ministers associated with the reformist movement in the ruling party, known as the G40, along with senior commanders of the Zimbabwe police. After some initial gunfire and explosions, there was an uneasy peacefulness about the country, which has now continued into day six.

This was not a coup in favor of a people’s movement—and the people did not come rushing out onto the streets after it took place. First they stayed put, then ventured out to continue, at a low key, their day-to-day activities. They finally responded to an invitation to march on Saturday in support of the military intervention. The march unleashed enormous civic energy across the country, endorsing the military’s actions and demanding that President Robert Mugabe resign.

That peaceful expression of public support is now an unpredictable factor in a coup that was not meant to overhaul the system. The army chief, Constantino Chiwenga, seems to have acted only on behalf of Emmerson Mnangagwa, who was ousted as vice president 10 days ago. Neither of these has expressed any interest in moving outside the boundaries of revolutionary governance established by the ruling party, ZANU–PF, under Mugabe, and both seem primarily concerned with ensuring the continued dominance of the party after his demise.

This party has presided over a series of flawed and allegedly stolen elections; the largely self-inflicted collapse of the economy; the displacement of millions of citizens driven out of the country by a combination of economic hardship and exclusion and political discrimination and violence; and the entrenchment not just of one-party dominance, but of a melding of the party to the state and military, to the point where the state no longer exists outside of ZANU-PF—despite the best efforts of regional partners, a period of power sharing with the opposition from 2009 to 2013, and the adoption of a modern democratic constitution at the end of that period.

Late last week, two of the senior opposition leaders—Morgan Tsvangirai, longtime contender for the presidency and head of the main opposition party, the Movement for Democratic Change, and Joice Mujuru, leader of People First and a fairly recent expulsion from ZANU-PF—held press conferences suggesting that the coup leaders had not yet reached out to them, despite rumors that an inclusive transitional government was the intended outcome of the coup. Now opposition members of Parliament will vote with the ruling party to impeach Mugabe without any control over the subsequent process.

Nor have civil society groups been engaged by the coup leaders, other than as cheerleaders. Instead, the last several days have been spent in negotiations with Mugabe regarding his future. These talks have included church leaders and two South African cabinet ministers representing the regional Southern African Development Community (SADC).

At the time of writing, Mugabe remains president and is continuing with ceremonial if not executive business. Rumor and gossip suggest that these negotiations are entirely about protecting his family and dignity, and about the future leadership of ZANU-PF, on the assumption that this leadership must automatically be the leadership of Zimbabwe. Late Sunday anticipation that Mugabe was about to tender his resignation has turned to cynicism about any voluntary surrender of power, and the parliament is holding impeachment hearings to force the president’s hand. For his part, Mugabe asserts that he will at least continue until a special ZANU-PF congress in December.

There is nothing yet to suggest that Zimbabwe is about to undergo a substantive shift toward a more democratic and open society based on the full implementation of its 2013 constitution. And there is likewise nothing to suggest that the presidential and parliamentary elections which must happen in 2018 will be conducted under free and fair conditions. Indeed, one possible outcome of the coup could be a rush to an election, which would merely compound unresolved problems related to the voter rolls, the perceived bias of the electoral commission, the large number of disenfranchised citizens in the diaspora, and the incumbency privileges and history of political violence within constituencies. 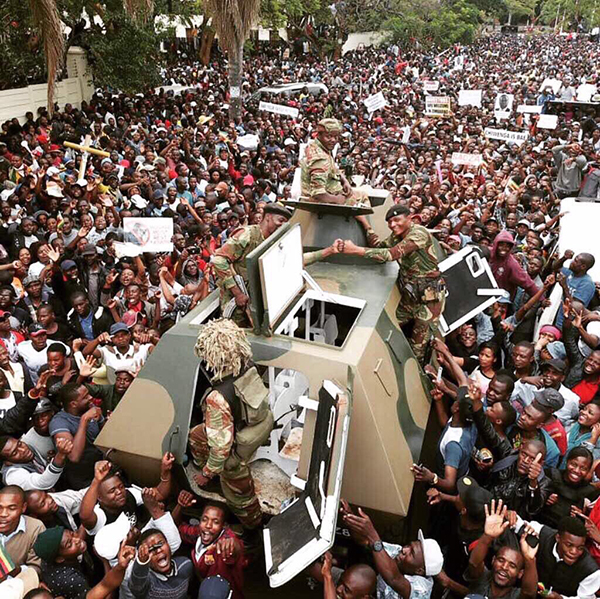 Perhaps more likely is an internationally recognized transitional government with postponed elections. But there is no constitutional mechanism for this. It would amount to an unconstitutional change of government, however much domestic support it might have. And it would be entirely in the hands of the generals and their political allies. This reminds one too much of Myanmar or Thailand, where the military has overseen a transition to nominal civilian rule that fortifies its own dominance in practice.

The only way out of this fundamental problem seems to be an acceptance by the international community that a coup has taken place. That means the African Union and SADC have to help the country toward a restoration of democracy. Given that the conditions prior to the coup were equally undemocratic, it will take an inclusive process and a good deal of time to put Zimbabwe back on the path to peace, prosperity, and the full realization of the values and principles of the 2013 constitution. A simple reset to November 13 is grossly insufficient. The African Union has, especially in West Africa, successfully put troubled member states together again. The lessons it learned in those cases must now be applied to Zimbabwe.