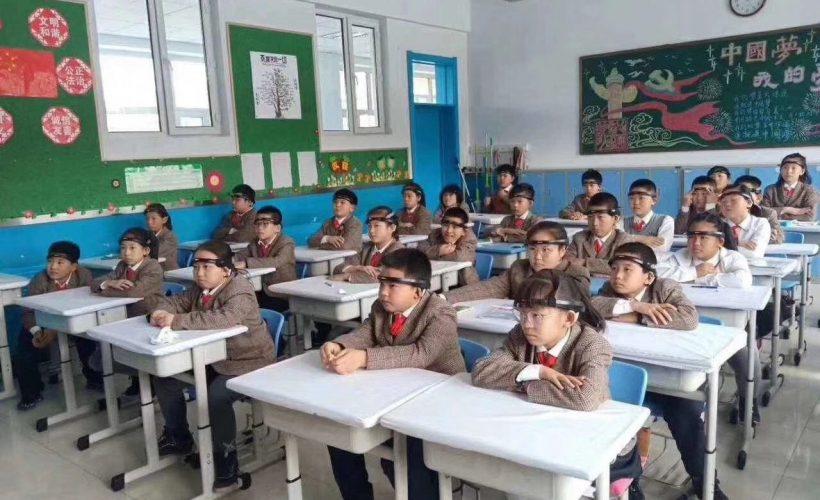 Children in an elementary school in Zhejiang wear brainwave-reading headbands that reportedly monitor their attention levels in class. Credit: SupChina

Chinese President Xi Jinping wants children and students not just to obey, but to love the Communist Party. At an April 19 conference organized by the Politburo to mark the 100th anniversary of the student-led anti-imperialist May Fourth Movement, he said, “We need to … strengthen political guidance for young people, guide them to voluntarily insist on the Party’s leadership, to listen to the Party and follow the Party.”

Political indoctrination has long been a required component of the curriculum at all levels of education in China. Under Xi, however, new steps are being taken to tighten the Communist Party’s ideological control over universities, schools, teachers, and students.

The Party’s system for influencing students depends in large part on their teachers and professors. In a speech at a Beijing seminar attended by teachers from across the country in March, Xi called on educators to instill patriotism in the country’s youth and reject “wrong ideas and ideology.” He also emphasized that teachers themselves “should have strict self-discipline, be consistent in class and out of class, online and offline, should consciously carry forward the main melody and actively convey positive energy.”

In recent months, a number of teachers have faced dismissal, detention, and other penalties after falling short of these expectations. On March 25, the Financial Times reported that prominent constitutional law professor Xu Zhangrun had been barred from teaching at the prestigious Tsinghua University in Beijing. He had written numerous essays that sharply and eloquently criticized the top leadership’s decisions, often drawing on ancient Chinese philosophy, literature, and political theory to make his arguments. Xu was subsequently stripped of his other positions and teaching responsibilities. On April 8, scholar Yu Jianrong, known for his research on China’s peasants, had his Sina Weibo microblogging account, which had 7.2 million followers, silenced such that he could no longer post comments, only read others’ messages.

In two other cases, educators have faced jail time for sharing information about the persecuted Falun Gong spiritual group in their private capacities. In January, Zeng Hao, a business professor at Tianhe College in Guangdong Province, was sentenced to 3.5 years in prison after posting images related to Falun Gong on Tencent’s QQ messaging platform. On April 15, Amnesty International issued an urgent action for high school chemistry teacher Chen Yan, who is expected to face trial for handing out a calendar with information about Falun Gong to someone on a Beijing street.

In early March, the Washington-based Uyghur Human Rights Project published a report outlining the details of 386 Uyghur scholars, students, and other intellectuals who have been swept into detention amid a massive re-education effort targeting Muslim minorities in Xinjiang.

Surveillance inside and outside the classroom

In an April 8 article, Radio Free Asia noted increased efforts to monitor Chinese university students. Reporters found online documents showing how institutions like Wuhan University of Science and Technology are continually recruiting students to act as informants on their classmates and teachers, typically submitting reports to authorities every two weeks. One former professor said the recruitment began in earnest in 2014, shortly after surveillance cameras began being widely installed on campuses in 2013.

More recently, surveillance cameras linked to facial recognition software and brainwave-detecting headbands have appeared in elementary and secondary schools, provoking nervousness and anger among some pupils. Although the monitoring is ostensibly for the purpose of tracking students’ focus and study habits, it could also be used to detect ideological transgressions by teachers or students.

Universities, government agencies, and private companies are increasingly trying to gain access to students’ social media accounts and other online information. Officials at universities in Beijing and Anhui province have reportedly asked students to register the details of their private and public accounts on Tencent’s WeChat and QQ platforms. In February the company China Youth Credit Management (CY Credit), working with the Communist Youth League, launched an application called “Unictown,” which aims to serve as the foundation for a specialized social credit system for China’s youth. The app is meant to track young adults’ behavior and incentivize activities that are considered positive or socially beneficial. The South China Morning Post reports that the firm has already collected data from 70 million people, is building a database of 90 million youth league volunteers, and aspires within a few years to cover all 460 million Chinese aged 18 to 45.

The Unictown app is not the only new party-linked mobile application targeting China’s youth. When the “Study Xi, Strengthen China” app was launched in January by the Party’s propaganda department, a corresponding version for young people also sprung up on the website, mobile app, and social media accounts of the party’s media mouthpiece, the People’s Daily. According to the South China Morning Post, the app requires “schoolchildren to study texts related to Xi’s political ideology.”

In Xinjiang, young Muslim minority children are more directly exposed to indoctrination. Those whose parents have been detained for “re-education” are themselves placed in state-run orphanages, where they are reportedly required to speak Chinese, eat pork, and read slogans like “I’m Chinese; I love my country.” In some instances children are being used to inform on their parents. An April 4 multimedia report by the New York Times on conditions in the ancient city of Kashgar included a chilling account of kindergarteners being interrogated. As one interviewee described it, “My daughter had a classmate who said, ‘My mom teaches me Quran.’ The next day, they are gone.”

In addition to indoctrinating students on Communist Party ideology, the authorities are clamping down on access to alternative ideas, including those associated with democratic governance. Over the past year, China’s Education Ministry has conducted countrywide audits of constitutional law textbooks, and books by reform-minded professors have reportedly been removed from online booksellers. A series of foreign academic publishers have come under pressure to remove certain articles from collections available in China, and at least some have complied.

The Communist Party’s watchful gaze also follows Chinese students who study abroad, whether through student informants, consulate-linked Chinese Student and Scholar Associations, or monitoring of WeChat accounts. One 2018 survey by Cheryl Yu, then a graduate student at the University of Washington, found that among 72 Chinese respondents from at least 31 American universities, 58 percent were aware of potential Chinese government surveillance in the United States. Yu also found that 80 percent of the students reported self-censoring (whether or not they demonstrated awareness of official surveillance) by choosing not to attend university events on politically sensitive topics, discuss such topics with large groups of fellow Chinese, or even admit to a willingness to learn about the issues.

Students who overstep the party’s redlines while abroad risk serious reprisals. On April 10, Mirror Media published an emotional account by Li Jiabao from Shandong Province, who had criticized China’s authoritarian system in a live-stream broadcast while studying in Taiwan. Soon afterward, he found that his QQ, WeChat, Taobao, and Alipay accounts were all deleted. As he counted down the days before he had to return to China, he reported having nightmares.

Recent activism by Marxist students from elite universities on behalf of exploited Chinese workers hints at the ways in which ideological indoctrination could backfire for the Party, whose actual governance is often in conflict with its loftier principles. Many other young people may reject or disregard the stilted propaganda entirely, and even high school students have balked at the onerous surveillance being imposed on them, in at least one case dismantling their classroom cameras.

Nevertheless, the Chinese authorities’ efforts to shape students’ minds have clearly had some success. Young Chinese studying abroad are often unwilling to explore forbidden topics, and domestic graduates who are employed as censors require crash courses on events like the 1989 Tiananmen Square massacre, suggesting that they have large blind spots in their knowledge of the world and their country.

China’s youth, in other words, are growing up in a more manipulated information environment than their parents’ generation or their foreign counterparts. There is a very real danger that this generation will be less open-minded, more nationalistic, more supportive of authoritarian rule, and more isolated from a common set of facts and norms that previously facilitated peaceful international exchanges.

To mitigate such an outcome, foreign educational institutions should re-examine the terms of their partnerships with Chinese universities, safeguard the academic freedom and security of their Chinese students, and find alternative channels for engaging students in China with the full spectrum of ideas necessary for a 21st-century education.

This article was also published on April 25, 2019, in the Diplomat.