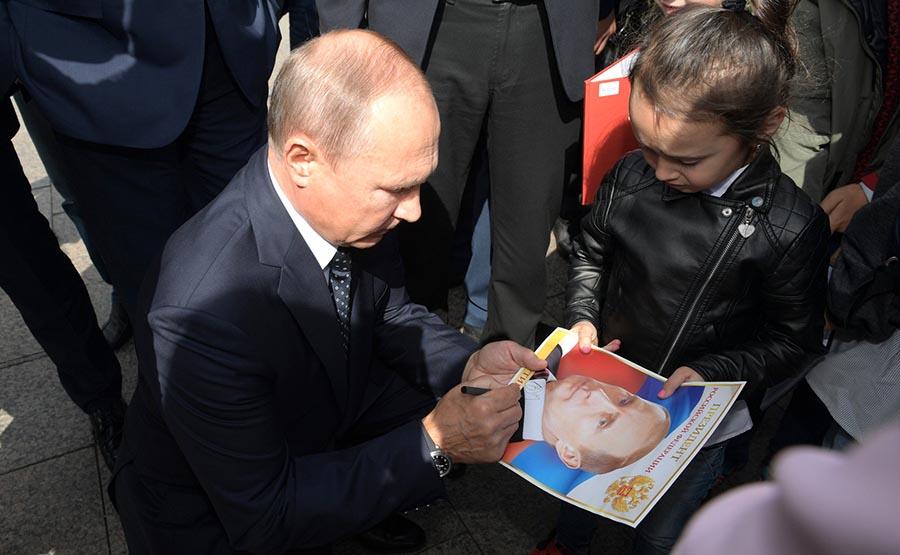 Before Russian President Vladimir Putin’s reelection in 2018, falling living standards, continued mass corruption, and limited prospects for political change sparked a new wave of mass protests with notable youth participation. Now, faced with Putin’s waning popularity, the government has tightened its grip over Russian youth through arrests, intimidation, restrictive new laws, and a revival of Soviet-era youth programs. These attempts to control and shape youth bear a striking resemblance to past top-down strategies employed by the Kremlin and its Soviet predecessors that ultimately failed to tame Russia’s young people.

Despite the growing participation of young people in antigovernment rallies, most young Russians do not share the anti-Putin sentiment of the demonstrators, and youth remain a strong pillar of the regime base. According to a February 2019 survey by the Levada Center, a leading independent research organization, 69 percent of Russians under the age of 25 support the president. Nevertheless, this cohort is hardly happy with the current state of affairs. A March 2019 poll by Gallup revealed that a record-high 44 percent of Russians between 15 and 29 years old want to leave the country. These numbers reflect a conflicted reality for young Russians: while they support Putin, who seemingly champions better social and economic conditions, they live in a society where honest and hard work does not translate into prosperity, and there are no feasible prospects for change.

Additionally, with the growing popularity of anticorruption investigations in the media, people are becoming better informed of the cronyism that rules Russia. The youth who do connect Putin and his policies with their declining economic and social well-being are increasingly pouring into the streets.

The figurehead of the anticorruption movement, Alexey Navalny, has developed a massive following among youth, who readily mobilized for his presidential election campaign in 2017. Navalny’s viral documentary exposing Prime Minister Dmitry Medvedev’s involvement in a large-scale corruption scheme led to mass protests with substantial participation from the younger generation. This did not go unnoticed by law enforcement; 158 minors were arrested across Russia on May 5, 2018, during anticorruption rallies led by Navalny.

In response to this youth activism, in December 2018, the Russian parliament passed a vaguely worded law that allows for the administrative prosecution of any organizer of an “unauthorized” public gathering involving minors. Ivan Luzin, an 18-year-old volunteer for Navalny’s campaign, was charged under the new law in February 2019 for bringing two minors to an anticorruption protest.

Another manifestation of the new crackdown was the persecution of informal groups primarily consisting of youth members. Artpodgotovka and Set’ made headlines after mass arrests of their members in 2017, with over 300 people arrested during an Artpodgotovka rally in Moscow in November of that year. Federal agents arrested 11 members of Set’, now deemed a terrorist organization, in a case largely based on confessions from members who say authorities tortured them until they incriminated themselves.

One of the most notorious cases of youth group persecution was the arrests of 17-year-old Anna Pavlikova and 18-year-old Maria Dubovik, both of whom were accused of extremism for their involvement in Novoe Velichie, a Telegram channel consisting of 13 members who discussed social issues. The teens’ lawyer argues that a Federal Security Service (FSB) agent was actually the founder of the group and had encouraged its participants to engage in increasingly radical antigovernment rhetoric.

However, the authorities are not focused only on political protests and informal youth groups. The government has also begun to target immensely popular musicians. In late 2018, riot police, concert organizers, prosecutors, city administrations, and a myriad of other officials canceled at least 40 musical performances throughout Russia. Husky, a popular Russian rapper, was jailed for 12 days that November after he played an impromptu show on the roof of a car after the authorities banned his official concert in Krasnodar. IC3PEAK, an experimental techno duo, had at least six concerts canceled after they released their music video “Death No More”, which featured several politically provocative scenes around Moscow. Other millennial-generation performers, including FrendZona, FACE, and Monetochka, also faced the censors’ wrath.

The taming of youth

While Kremlin-aligned authorities crack down on youth movements, Putin prefers to evade responsibility for unpopular state policies by letting other government officials propose and enforce them—in effect slipping a velvet glove over his iron fist. In a meeting with his cultural advisers in December 2018, Putin said of the popular rap and experimental music scene, “If it is impossible to stop, then we need to lead, and in an appropriate way, direct.” A prime example of the Kremlin’s silly attempt at “directing” rap music was the infamous video of 64-year-old Kremlin media mouthpiece Dmitry Kiselyov, featuring him “dabbing” and lambasting the West—an attempt by the Kremlin to connect with younger audiences. The plan backfired, however, as the most popular comment under the video was, “Did you also throw up?”

The government’s recent growing ambition to direct youth can also be seen through the elevation of Rosmolodezh—the government agency responsible for implementation of the national youth policy. In 2018, the Kremlin moved the agency under its direct command and delegated its oversight to high-level officials in Putin’s administration. Shortly after that, in March 2019, the agency’s budget received a seven-fold increase, amounting to almost $42 million, signaling the government’s increased attention to Russia’s youth.

While Rosmolodezh has a number of initiatives aimed at preventing youth from opposing the government, among its largest projects is the Youth Army—a program aimed at cultivating progovernment youth that is largely based on past Kremlin initiatives developed in the 2000s, which in turn had drawn on traditional Soviet programs. Earlier this year, all orphanages and defense industry companies across the country were forced to join the movement. By luring high-school-aged children and college students with state-sponsored travel and promises of career opportunities, the government sought to form a loyal “army” ready to show support for Putin’s policies and attack opponents.

And yet, the massive antigovernment protests of 2011–12 revealed the ineffectiveness of the Youth Army’s predecessors to control youth and counter anti-Putin sentiment. Consequently, Rosmolodezh was deprived of its political influence and until recently had been led by minor government officials. Interestingly—despite evident past failures—the government is now expanding the same tactics that in the past failed to respond to the new wave of youth activism. Once again, the Kremlin is using old, ineffective strategies without seriously addressing the government’s key problem—that the top-down approach developed by aging government officials will only result in further resentment among young Russians increasingly frustrated by their lack of social mobility.

What’s next for Russia’s youth?

With Putin’s domestic approval ratings falling to an almost a record low of 64 percent, and as the Russian economy slows down, any signs of opposition have become much more threatening. The government is utilizing its full arsenal of repressive measures, which may be enough to strike fear into the hearts of young activists and artists in the short term, but will hardly solve the Kremlin’s problem of unruly youth in the long term. Moreover, the Kremlin’s “taming” approach— particularly, the patriotic factories—are unlikely to work; at least not until officials change the top-down approach that only elicits eye-rolls from youth. The continuing cycle of relaxing youth policy and then cracking down when dissent grows will continue if youth do not have an effective outlet to air their grievances to the state. The increasing attempts to control youth will ultimately end in another failure, due to the Kremlin’s disconnect from young Russians.

Furthermore, public outrage that came in response to recent criminal cases against youth—most notably the “Mothers’ March” protest in August 2018 prompted by the Novoe Velichie arrests—showed the genuine concern of families and society over the well-being of activists, especially youth, and the frustration over the lack of constructive ways to help them stay safe. Swaths of Russian society unlikely to march on the streets otherwise were finally pushed to their limit of what they could tolerate from the state. The injustice of arresting and persecuting children seemed to resonate with many in Russian society, in ways that other issues have not. The importance of youth activism will continue to be a critical issue in the years to come. How the generations of young parents who came of age during Putin’s reign will respond to their children’s desire to speak out will be an important test to the vitality of youth activism in Russia, and to the effectiveness of the government’s schemes to quash free thought.