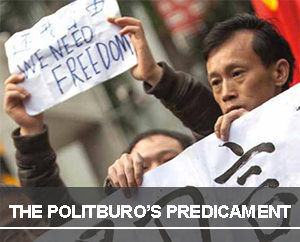 The Politburo’s Predicament—which examines the evolution of the censorship and internal security apparatus under the leadership of Xi Jinping—finds that the overall degree of repression has increased since Xi rose to power in November 2012 but at a cost to the Communist Party's resilience.

Xi has combined populist and coercive policies in an attempt to strengthen the party’s hold on power. These efforts have proven somewhat effective, but they have also fueled resentment and recruitment to the cause of rights defense, both within society and among some party members, security personnel and censors, author Sarah Cook concludes.

The result is that the Chinese Communist Party is trapped in a vicious cycle, whereby the actions taken to maintain power risk alienating the population and some of its own members, undermining the regime’s long-term legitimacy and security.

To identify trends in political repression under the new CCP leadership, Freedom House researchers evaluated changes in the level of repression for 17 categories of targets between the two years preceding November 2012 and the period since the change in leadership. The chart below provides an example of the findings regarding six such groups. See here for the evaluation and trend summaries for all 17.