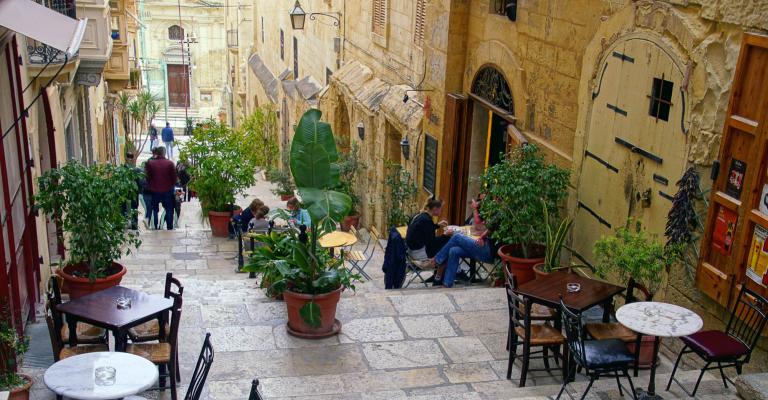 Malta is a parliamentary democracy with regular, competitive elections and periodic rotations of power. Civil liberties are widely respected. However, the political system makes it difficult for new or smaller groups to challenge the dominance of the two main parties, and recent revelations have underscored the threat of official corruption.

In June 2017, Prime Minister Joseph Muscat won a second term after his Labour Party was victorious in parliamentary snap elections that were considered credible.

Members of Malta’s unicameral legislature, the House of Representatives, are elected for five-year terms through a single-transferable-vote system in multimember districts. Snap elections were held in June 2017, about nine months ahead of schedule. The ruling Labour Party won 55 percent of the vote and 37 seats, leaving the opposition Nationalist Party and its allies with 30 seats.

The constitution and the electoral law provide for democratic elections, and balloting is generally free and fair in practice. Members of the Electoral Commission are appointed by the president following consultation between the government and the opposition, and both major parties have representatives on the panel. The electoral system has been criticized for electoral boundaries that favor the incumbent parties and a voting system that makes it difficult for smaller parties to win representation. In practice, a party must take 16–17 percent of the valid votes in one of the 13 electoral districts to enter the parliament.

There are no significant restrictions on the formation of political parties, though the ruling party benefits from progovernment bias in the state media, and smaller parties have difficulty competing against the two established parties given the voting system and their superior access to private donations. The newly formed Democratic Party won two seats in the 2017 elections only by forging an alliance with the Nationalists and running candidates on their lists.

The 2015 Financing of Political Parties Act was adopted to improve the transparency of party fundraising, but critics have noted that compliance is overseen by the Electoral Commission, whose members are appointed by the two parties. The law caps individual donations, but imposes no overall cap on electoral spending, and parties are not obliged to identify donors who contribute less than €7,000 ($8,000). In 2017, the Nationalist Party was accused of using false invoices to conceal unreported donations, which led to an investigation by the Electoral Commission. In October 2018, the Constitutional Court upheld an appeal by the Nationalist Party to halt the investigation, ruling that the Electoral Commission cannot be both the investigator and the judge in party-finance cases. In response, the government announced that it would propose amendments to the law in order to comply with the court ruling.

The Labour Party and its rival, the Nationalist Party, have regularly alternated in power since independence from Britain in 1964, establishing a strong pattern of peaceful democratic transfers after elections. The most recent change occurred in 2013.

Voters are generally free from undue interference in their political choices, and no military, foreign, or religious entities exert undemocratic influence over the vote.

However, in recent years, observers have highlighted the influence of powerful economic interests that donate to political parties. According to the Labour Party’s 2017 disclosures on the previous year’s donations, several construction companies made seven-figure contributions. The Nationalist Party has also been accused of receiving large donations from private corporations in violation of the law. The Labour government has favored the construction and land-development industries in its policies, and the two sides have maintained a close relationship. In September 2018, a controversial large-scale apartment and hotel construction project in Pembroke to be built by prominent developer the db Group (which has been a donor to both major parties), was approved by a government board. The proposed project had provoked intense opposition from local residents, who argued that the environmental impact and noise from the construction would significantly reduce the quality of life.

Women and minority groups enjoy full political rights and electoral opportunities, though conservative societal norms have limited women’s participation to some extent. Women hold 10 parliament seats, or about 15 percent of the total, in addition to the presidency.

Elected officials are largely free to make and implement laws and policies without improper obstacles from unelected groups. A report published by The Venice Commission of the Council of Europe in December 2018 found that disproportionate power is concentrated in the executive branch and that the current system features inadequate checks and balances to constrain the prime minister.

The Panama Papers have led to a series of corruption allegations against Maltese officials since 2016, and related investigations were ongoing throughout 2018. One of the most important cases involves a government minister and the prime minister’s chief of staff, who set up trusts in New Zealand and secret accounts in Panama shortly after taking office in 2013. In July 2018, a magisterial inquiry into corruption allegations against Michelle Muscat, the prime minister’s wife, who had allegedly laundered money for the government of Azerbaijan, concluded by clearing both her and the prime minister of wrongdoing.

Another ongoing inquiry involves claims of kickbacks to Muscat’s chief of staff from a controversial program that issues Maltese passports to foreign investors. A key whistle-blower in these cases, former bank employee and Russian national Maria Efimova, fled the country in 2017, saying she feared for her life after journalist Daphne Caruana Galizia’s murder.

In a report published in January, a mission from the European Parliament criticized the Maltese government for the small number of criminal investigations into money laundering surrounding the revelations in the Panama Papers, contributing to impunity among high-level officials accused of corruption.

Two posts on the Permanent Commission against Corruption, which had been empty since mid-2017, were finally filled in January 2018, allowing the body to resume its work. However, the commission lacks prosecutorial powers, severely limiting its effectiveness. Very few cases investigated by the commission have resulted in prosecutions.

Score Change: The score declined from 3 to 2 due the inefficacy of the country’s anticorruption institutions in investigating the myriad corruption scandals that have emerged from the Panama Papers and other sources.

Malta has a freedom of information law and asset disclosure rules for public officials. However, the Swiss Leaks scandal in 2015 revealed that a number of politicians had apparently hidden assets in Swiss bank accounts, and investigations by tax authorities were still under way as of 2018. In May, the finance minister announced that the government would not be publishing a list of names of “politically exposed” people, including prominent government officials, who held Swiss bank accounts, arguing that the list’s publication would be illegal. The decision contradicted a promise made by Prime Minister Muscat in 2015 to reveal the names.

Following the passage of legislation in 2017 calling for the appointment of a commissioner for standards in public life to monitor ethical standards among public officials, in November, the first commissioner was sworn in. However, the commissioner is only able to investigate matters from after October 30.

The government has been criticized in recent years for withholding important details on a series of large public contracts, which are often heavily redacted for public release. According to government statistics, nearly half of the requests for information received by government bodies under the Freedom of Information Act between 2015 and 2017 were rejected.

The media are generally free and diverse. Residents have access to international news services as well as domestic outlets, though the opposition often complains that state-owned media favor the government.

Caruana Galizia’s murder in a 2017 car bombing added a new level of physical danger to the work of journalists in Malta, particularly those investigating political corruption. The trial of the three suspects accused of the murder was ongoing at the end of 2018. In October, a mission led by Reporters without Borders (RSF) criticized the Maltese authorities for “not living up to their obligations to guarantee and safeguard freedom of expression and press freedom.” The mission pointed to the slow pace of the trial against the suspects in Caruana Galizia’s murder, as well as the failure of investigators to arrest the masterminds behind the crime, which is believed to be a contract killing.

In April, the parliament passed a new law decriminalizing libel. However, investigative journalists continued to face libel suits throughout 2018, including a lawsuit against Caruana Galizia that was not dropped posthumously, and a separate suit against her son, both filed by the prime minister.

The constitution establishes Roman Catholicism as the state religion, but religious minorities are generally able to worship freely. A 2016 legal reform decriminalized the vilification of religion, or blasphemy, and instead expanded a provision banning incitement of hatred to include religious hatred.

Scholarship and the education system are free from political control and indoctrination.

There are no significant constraints on the expression of personal views among the general public, notwithstanding laws banning incitement of hatred on various grounds.

The constitution provides for freedom of assembly, and the government generally respects this right in practice.

The law recognizes the rights to form and join trade unions, engage in collective bargaining, and strike. The government enforces labor protections, and antiunion discrimination by employers is relatively uncommon.

The judiciary is generally considered independent. The president appoints senior judges on the advice of the prime minister. A 2016 constitutional reform created a Judicial Appointments Committee (JAC) to make recommendations to the prime minister, except in the case of the chief justice, who chairs the committee. If the prime minister rejects the committee’s recommendations, he is obliged to explain his reasons in writing and before the parliament. However, the Venice Commission’s 2018 report noted some weaknesses in the justice system that undermine judicial independence, including the dual roles held by the attorney general as both an advisor to the government and a prosecutor. It also observed that despite the establishment of the JAC, the prime minister still maintains considerable power over judicial appointments, making the judiciary vulnerable to political interference.

Police and prosecutors typically observe due process guarantees, including access to defense counsel and protections against arbitrary arrest. However, civil society activists have criticized the authorities for failing to bring the organizers of Caruana Galizia’s murder to justice, as well as the small number of criminal investigations into the corruption scandals that have embroiled the country in recent years.

The authorities do not engage in torture or other ill-treatment of detainees. Rates of violent crime are comparatively low, though various forms of organized crime remain a problem, and a series of car bombings in recent years preceded the 2017 murder of Caruana Galizia.

Discrimination based on gender, race, sexual orientation, and other such categories is prohibited by law, and these rules are generally enforced, though some forms of societal discrimination—a gender pay gap, for example—persist in practice.

Malta largely complies with international and EU rules on refugees and asylum seekers; a legal amendment adopted in 2017 gave asylum seekers the right to appeal decisions on their claims. However, the country has been criticized for resisting acceptance of migrants rescued at sea, and advocates for migrants and refugees sometimes report police harassment and hostility from far-right groups.

Residents are largely free to move within the country and travel abroad, and to change their place of employment or education without undue interference.

There are no significant restrictions on property rights, and the legal framework is generally supportive of private business activity.

Divorce was legalized in 2011, and subsequent laws have allowed transgender people to express their gender identity on government documents, legalized same-sex marriage, and permitted adoption by same-sex couples.

Malta is the only EU country where abortion is strictly prohibited in all cases, even when the woman’s life is in danger. Domestic violence remains a problem despite government efforts to combat it.

Residents generally enjoy fair access to economic opportunity and protections from labor exploitation, though migrant workers in particular are vulnerable to labor and sex trafficking or conditions that amount to forced labor.