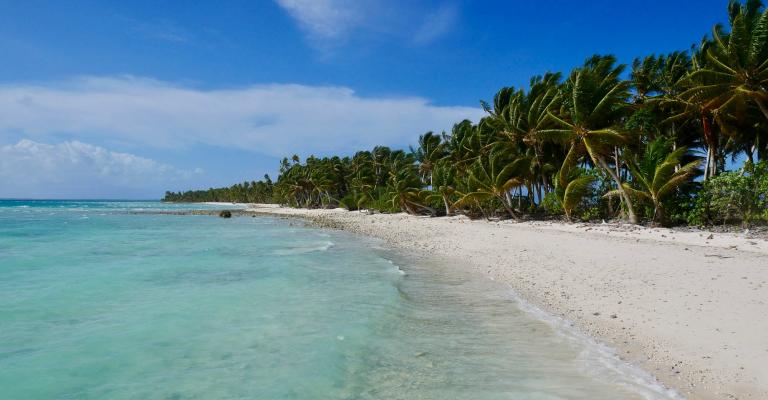 The parliament elected David Kabua, son of the first president of the Marshall Islands, Amata Kabua, to the post in January 2020. He succeeded Hilda Heine, the first woman to be head of state of a Pacific Island country, who lost her coalition after the November 2019 elections.

The Nitijela (parliament) consists of 33 members, with 19 seats directly elected in single-member districts and five multimember districts with between 2 and 5 seats. Members serve four-year terms. Elections are officially nonpartisan, and lawmakers are free to form alliances and change party affiliations after taking office.

The November 2019 elections were affected by low turnout. The opposition made significant parliamentary gains during that contest.

The constitutional and legal framework provides for democratic elections and is implemented impartially.

In 2019, the Supreme Court removed a 2016 law that banned absentee voting. However, that law’s undoing did not take effect by the November 2019 elections, as the court recognized that there was too little time for the government to implement the changes. An estimated 30,000 Marshallese citizens, around a third of the country’s citizenry, live in the United States and had a growing influence in the 2011 and 2015 parliamentary and mayoral elections, before the law was set in place.

There are no undue restrictions on the elected government’s ability to form and implement laws and policies. A body of chieftains from the Ralik and Ratak Island chains, the Council of Iroij, has an advisory role under the constitution. Its 12 members can offer joint opinions and request reconsideration of any bill affecting customary law, traditional practices, land tenure, and related matters. Concerns of Chinese influence persist, despite the RMI’s trade deal with Taiwan and deep ties to the United States.

The RMI has close relations with the United States under the 1986 CFA, which allows the US military to operate in the RMI in exchange for defense guarantees and development assistance. A component of the compact in force through 2023 calls for the United States to provide annual aid, including contributions to a trust fund for the country. In November 2021, 10 US House of Representatives members urged the Biden administration to focus on CFA renewals with the RMI, the FSM, and Palau, citing concerns of Chinese influence.

Corruption has been a chronic problem, though auditing bodies and the independent courts are somewhat effective in detecting abuses and holding officials accountable. High-ranking public officials, however, are rarely prosecuted for corruption. Corruption is most prevalent in the allocation of foreign aid, government procurement, and transfers. In 2020, the United Nations and the government of New Zealand launched a regional anticorruption project, with over $16 million in funds that would operate in 13 Pacific Island countries, including the RMI.

The number of fraud cases prosecuted by the auditor general increased in both 2019 and 2020, a possible sign of added effectiveness due to new funding from the World Bank. In September 2020, Auditor General Junior Patrick reported a total of 13 corruption allegations since that January, including embezzlement, misappropriation of public assets, abuse of office, and tax evasion.

In 2020, a three-year review of the government’s passport program found numerous internal control and compliance problems. Over 500 passports had been issued to non-Indigenous Marshallese who did not have evidence of legal citizenship. In several instances, passport applications were approved without the required documentation at the instruction of high-ranking officials.

The government generally respects the freedoms of speech and the press. A privately owned newspaper, the Marshall Islands Journal, publishes articles in English and Marshallese. Broadcast outlets include both government- and church-owned radio stations, and cable television offers a variety of international news and entertainment programs.

Internet access is expanding, reaching nearly 40 percent of the population in 2018, but it remains limited due to poor infrastructure and high costs. In August 2021, the World Bank agreed to finance an $30 million internet-access project in the RMI.

Civil society groups, many of which are sponsored by or affiliated with church organizations and provide social services, operate freely.

Dangerous radiation levels on various atolls of the RMI—with levels similar to those observed after the 1945 atomic bombing of Hiroshima and the 2011 Fukushima nuclear accident—were caused and hidden by the US military but have been reported on in recent years. From the 1940s through the 1950s, the US military displaced Marshallese living on various atolls, detonated 67 nuclear bombs, destroyed entire islands, and dumped 130 tons of irradiated soil from Nevada into Runit Dome on the atoll Enewetak. Further, the US government withheld key information about the contents of Runit Dome and falsely claimed it would be safe for the Marshallese to return before the 1986 CFA was signed. An international tribunal created by the RMI and United States in 1988 acknowledged $2.3 billion in claims to be paid by the US government; only $4 million had been paid out by 2010.

In 2019, then president Heine called on the US government to pay to repair Runit Dome, which was found to be leaking, further endangering the nearby population. In 2020, the United States declared that Runit Dome was safe, despite RMI-provided evidence to the contrary. The RMI’s Nuclear Commission claimed that the US report contains no new analysis and ignores evidence and information from local communities. In October 2021, members of a US House of Representatives subcommittee criticized the Biden administration, saying that its stance on Runit Dome was affecting CFA renewal negotiations. In November, House of Representatives members Raúl Grijalva and Katie Porter called on the US Energy Department to release more information about the state of Runit Dome.

Freedom of movement is generally respected. Marshallese citizens have the right to live and work in the United States and to travel there without a visa. In recent years, sea level rise due to climate change has become a more prominent impetus for Marshallese citizens to move to the United States, in a trend known as voluntary out-migration. As many as 25,000 people left the RMI due to out-migration between 2011 and 2021 according to preliminary census data released in November 2021.

In 2019, a dengue fever outbreak prompted a state-of-emergency declaration and a domestic travel ban throughout the Marshall Islands. The outbreak was severe, and the state of emergency was extended into 2020. That March, restrictions were further tightened to prevent the spread of COVID-19. All travel into the Marshall Islands, including for Marshallese citizens, was banned for much of 2020, as was, at times, all outbound travel. These restrictions were eased as 2021 progressed in order to facilitate repatriation.

Individuals have the rights to own property and establish private businesses, and these rights are largely observed in practice. Land ownership is, however, subject to complex local ownership rules and norms.

Personal social freedoms are mostly upheld. However, the minimum age for marriage is 16 for women and 18 for men; about a quarter of women aged 20–24 were married by age 18. While domestic violence remains widespread, reporting of the problem has increased in recent years possibly due to improved processes for obtaining orders of protection. Eight domestic violence complaints were filed in the first five months of 2021, while 10 were recorded in all of 2020.

The government enforces a minimum wage law, though it does not apply to the informal sector. Some local and East Asian women are subjected to forced prostitution in a trade that depends on visiting freight or fishing vessels. The RMI remains on the Tier 2 watchlist of the US State Department’s Trafficking in Persons Report 2021 due to the RMI’s limited policing of human trafficking, though the State Department noted the government’s efforts to improve.