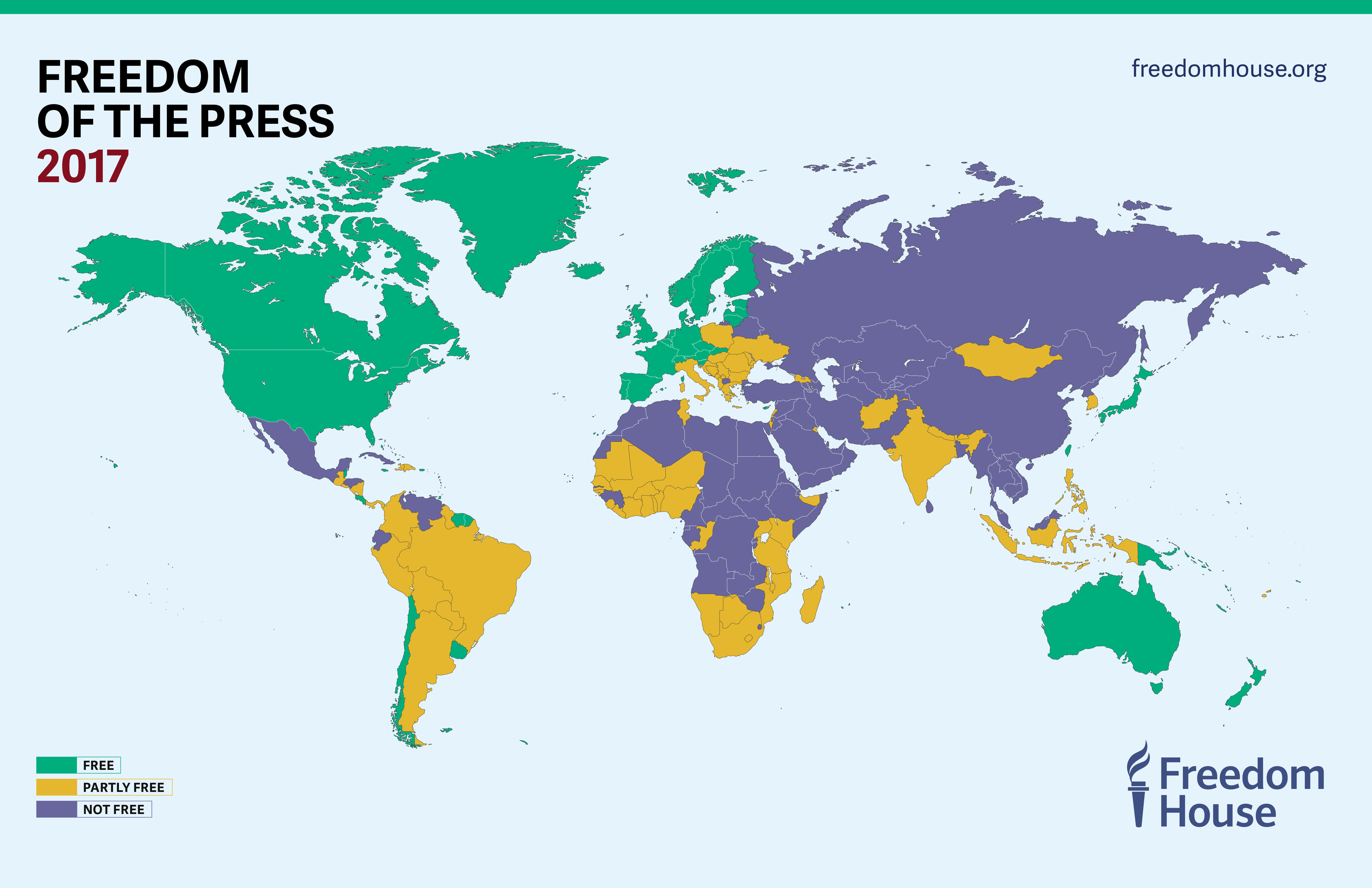 Freedom of the Press Research Methodology

Freedom of the Press Methodology

Freedom of the Press provides analytical reports and numerical scores for 199 countries and territories, continuing a process conducted by Freedom House since 1980. Each country and territory is given a total press freedom score from 0 (best) to 100 (worst) on the basis of 23 methodology questions divided into three subcategories. The total score determines the status designation of Free, Partly Free, or Not Free. The scores and reports included in Freedom of the Press 2017 cover events that took place between January 1, 2016, and December 31, 2016.

Freedom House assesses media freedom using common criteria for all settings, in poor and rich countries as well as in countries of varying ethnic, religious, and cultural backgrounds. Article 19 of the Universal Declaration of Human Rights states:

Everyone has the right to freedom of opinion and expression; this right includes freedom to hold opinions without interference and to seek, receive, and impart information and ideas through any media regardless of frontiers.

All states, from the most democratic to the most authoritarian, are committed to this doctrine through the UN system; to deny it is to deny the universality of basic human rights. While cultural distinctions or economic underdevelopment may affect the character or volume of news flows within a country or territory, these and other differences are not acceptable explanations for infringements such as centralized control of the content of news and information.

Freedom of the Press findings are determined through a multilayered process of analysis and evaluation by a team of regional experts and scholars. Through multiple stages of coding and review, the process emphasizes intellectual rigor and aims for consistent and unbiased judgments.

The research and scoring process involves more than 90 analysts—primarily external consultants—who draft the scores and country/territory reports. Analysts gather information from field research, professional contacts, reports from local and international nongovernmental organizations (NGOs), reports of governments and multilateral bodies, and domestic and international news media. We would particularly like to thank the other members of the International Freedom of Expression Exchange (IFEX) network for providing detailed and timely analyses of press freedom violations in a variety of countries worldwide.

The scores are reviewed individually and on a comparative basis in a series of seven regional meetings involving analysts, a team of senior academic advisers, and Freedom House staff. These reviews are followed by cross-regional assessments in which an effort is made to ensure comparability and consistency in the findings across the world.

Through the years, we have refined and expanded our methodology. Recent modifications have aimed to capture changes in the news and information environment without altering the comparability of data since the project’s inception. For example, the methodology was modified to incorporate the role of digital media.

The level of press freedom in each country and territory is evaluated through 23 methodology questions divided into three broad categories: the legal environment, the political environment, and the economic environment. For each methodology question, a lower number of points is allotted for a more free situation, while a higher number of points is allotted for a less free environment. A country or territory’s final score (from 0 to 100) represents the total of the points allotted for each question. A total score of 0 to 30 results in a press freedom status of Free; 31 to 60 results in a status of Partly Free; and 61 to 100 indicates a status of Not Free.

The diverse nature of the methodology questions seeks to address the varied ways in which pressure can be placed on the flow of information and the ability of print, broadcast, and digital media to operate freely and without threat of repercussions. In short, we seek to provide a picture of the entire “enabling environment” in which the media operate. We also assess the diversity of the news and information available to the public in any given country or territory, from either local or transnational sources. Freedom of the Press is focused on the ability to provide and access news and information. It generally pertains to journalists and formal news outlets, whether print, broadcast, or online, but also includes less formal sources—such as blogs, social media, and text messages—when they serve as de facto news providers.

The legal environment category encompasses an examination of both the laws and regulations that could influence media content, and the extent to which they are used in practice to enable or restrict the media’s ability to operate. We assess the positive impact of legal and constitutional guarantees for freedom of expression; the potentially negative aspects of security legislation, the penal code, and other statutes; penalties for libel and defamation; the existence of and ability to use freedom of information legislation; the independence of the judiciary and official regulatory bodies; registration requirements for both media outlets and journalists; and the ability of journalists’ organizations to operate freely.

Under the political environment category, we evaluate the degree of political influence in the content of news media. Issues examined include the editorial independence of both state-owned and privately owned outlets; access to information and sources; official censorship and self-censorship; the vibrancy of the media and the diversity of news available within each country or territory; the ability of both foreign and local reporters to cover the news in person without obstacles or harassment; and reprisals against journalists or bloggers by the state or other actors, including arbitrary detention, violent assaults, and other forms of intimidation.

Our third category examines the economic environment for the media. This includes the structure of media ownership; transparency and concentration of ownership; the costs of establishing media as well as any impediments to news production and distribution; the selective withholding of advertising or subsidies by the state or other actors; the impact of corruption and bribery on content; and the extent to which the economic situation in a country or territory affects the development and sustainability of the media.

1.  Do the constitution or other basic laws contain provisions designed to protect freedom of the press and of expression, and are they enforced? (0–6 points)

2.  Do the penal code, security laws, or any other laws restrict reporting and are journalists or bloggers punished under these laws? (0–6 points)

3.  Are there penalties for libeling officials or the state and are they enforced? (0–3 points)

4.  Is the judiciary independent and do courts judge cases concerning the media impartially? (0–3 points)

5.  Is Freedom of Information legislation in place and are journalists able to make use of it? (0–2 points)

7.  Are media regulatory bodies, such as a broadcasting authority or national press or communications council, able to operate freely and independently? (0–2 points)

8.  Is there freedom to become a journalist and to practice journalism, and can professional groups freely support journalists’ rights and interests? (0–4 points)

1.  To what extent are media outlets’ news and information content determined by the government or a particular partisan interest? (0–10 points)

2.  Is access to official or unofficial sources generally controlled? (0–2 points)

3.  Is there official or unofficial censorship? (0–4 points)

5.  Do people have access to media coverage and a range of news and information that is robust and reflects a diversity of viewpoints? (0–4 points)

6.  Are both local and foreign journalists able to cover the news freely and safely in terms of physical access and on-the-ground reporting? (0–6 points) [*Note: this question applies to conditions experienced by journalists, bloggers, or media outlets during the course of their work. See also note in B7.]

7.  Are journalists, bloggers, or media outlets subject to extralegal intimidation or physical violence by state authorities or any other actor as a result of their reporting? (0–10 points) [*Note: This question applies to conditions experienced by journalists, bloggers, or media outlets as a result of their work. See also note in B6.]

1.  To what extent are media owned or controlled by the government, and does this influence their diversity of views? (0–6 points)

2.  Is media ownership transparent, thus allowing consumers to judge the impartiality of the news? (0–3 points)

3.  Is media ownership highly concentrated and does this influence diversity of content? (0–3 points)

4.  Are there restrictions on the means of news production and distribution? (0–4 points)

5.  Are there high costs associated with the establishment and operation of media outlets? (0–4 points)

6.  Do the state or other actors try to control the media through allocation of advertising or subsidies? (0–3 points)

7.  Do journalists, bloggers, or media outlets receive payment from private or public sources whose design is to influence their journalistic content? (0–3 points)