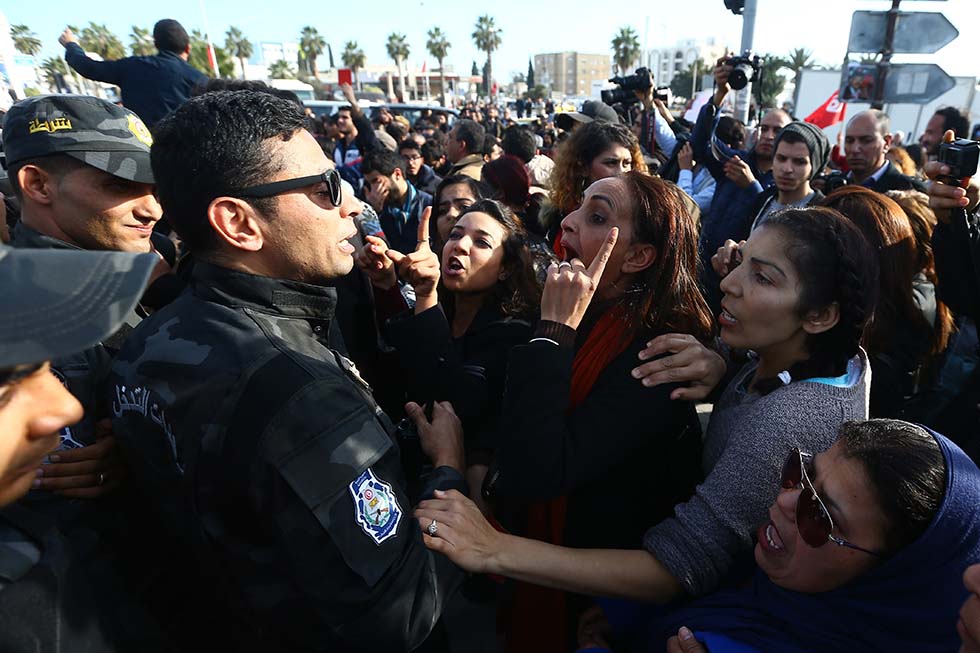 Democratic Backsliding in Tunisia: The Case for Renewed International Attention

Of all the Arab states that experienced popular uprisings and political upheaval in 2011, Tunisia alone navigated the crisis through civil debate, free elections, and constructive negotiations. But Tunisia remains far from consolidating its new democracy and is showing signs of backsliding.

Of all the Arab states that experienced popular uprisings and political upheaval in 2011, Tunisia alone navigated the crisis through civil debate, free elections, and constructive negotiations, avoiding the violence and repression that have racked so many other countries in the region. Its comparative success demonstrated the feasibility of peaceful democratic transitions, even in settings where authoritarian rule has prevailed for decades. Nearly eight years after its revolution, however, Tunisia remains far from consolidating its new democracy and is showing signs of backsliding.

The country was rated Free for the first time in the 2015 edition of Freedom in the World, after it adopted a progressive constitution and held free and fair national elections. Since then, democratic progress has stalled. The government has been unwilling or unable to implement many of the most fundamental democratic reforms called for by the constitution, and its scores in Freedom in the World have dipped accordingly. If Tunisia’s democratic slide continues at its current rate, the country is likely to lose its Free status.

In the most positive development since 2015, the country’s first municipal council elections were finally held in May 2018 after a two-year delay. Despite the relatively low turnout, a decisive victory by independent candidates reflected a dynamic political culture in which citizens are taking democracy into their own hands and running for political office.

Nonetheless, with presidential and parliamentary elections just around the corner in 2019, the stakes for the reform agenda are high. The principal international supporters of Tunisia’s new democracy—the United States, the European Union, and the World Bank—should focus their diplomatic and assistance strategy on achieving key democratic reforms over the next year. These should include establishing a Constitutional Court, lifting the state of emergency, and harmonizing the penal code with the new constitution and international standards.

After adopting a constitution that was hailed by the Norwegian Nobel Committee as “the most egalitarian and democratic” in the Arab world, the government of Tunisia started rolling back freedoms in response to terrorist attacks the very next year, in 2015. It imposed a state of emergency that has yet to be lifted, and passed an antiterrorism law that gave sweeping authority to security forces.[1] These measures have empowered a largely unreformed security sector that maintains close ties to figures associated with the former regime, including in the ruling Nidaa Tounes party. Security forces have used their expanded authority to impose curfews, raid homes, and ban protests without a court order. They arrested nearly a thousand citizens on riot charges in response to anti-austerity protests earlier this year, compelling some to sign confessions without a lawyer present. In an example of brash disregard for the rule of law and civilian authority, two armed members of the police union stormed a court in Ben Arous on February 26, 2018, forcing the court to release five officers who were standing trial for allegedly torturing a detainee. The perpetrators have yet to be held accountable for this act.

Tunisia also has more work to do to ensure full civilian control over the military. Yassine Ayari, a member of parliament, was prosecuted in a military court in January for a Facebook post in which he criticized President Beji Caid Essebsi’s choice for appointment as chief of staff for ground forces. Ayari, who had served time in 2015 after a similar conviction in a military court, was sentenced in March to 16 days in prison for insulting the military. Although freedom of expression was enshrined in Decree 115 of 2011 and the 2014 constitution, the government continues to use older press, penal, and military codes to target outspoken critics and journalists, and officials ignore a majority of freedom of information requests. The National Union of Tunisian Journalists reported that government employees were responsible for over 60 percent of incidents, or 96 out of 162, in which the work of journalists was obstructed between May 2017 and April 2018.[2] The Tunisian Freedom of Press Center reported that 63 percent of applicants did not receive information as requested through the Freedom of Information Law.[3]

On July 27, in the latest sign of authoritarian resurgence, the parliament passed Law 30 of 2018, which requires all nongovernmental organizations (NGOs) to register with a new National Registry of Institutions.[4] The law, adopted without civil society consultation, is needlessly restrictive and will harm the ability of NGOs to operate.[5] Failure to register or even errors on NGO applications could result in stiff fines and up to a year in prison for NGO staff. The legislation appears to violate the 2014 constitution and Decree 88 of 2011, which is considered the most progressive NGO framework in the region.[6] This development is part of an alarming trend in which the concerns and input of civil society are being sidelined by the government. Between 2014 and 2017, the government suspended 157 associations, dissolved 198, and referred another 947 to court.[7] Hundreds of others have complained that their registration requests were stalled or blocked entirely.[8]

Just weeks after the passage of the NGO restrictions, President Essebsi used the occasion of National Women’s Day on August 13 to announce his support for equal inheritance rights for women, drawing significant media attention to the issue. The government has made great strides on women’s rights since the revolution, including adoption of a landmark domestic violence law in 2017. But these initiatives often seem timed to obscure more retrograde actions on other issues. Last year, the day after the government secured passage of a fiercely contested amnesty law that gave immunity for financial crimes to prominent officials from the former regime, Essebsi announced support for the repeal of a law that prohibited Tunisian Muslim women from marrying outside their faith, and the rule was then duly abolished.

Tunisia’s new democracy still suffers from a lack of checks and balances. The executive branch plays an outsized role in governance, including by presenting all new legislation and initiatives and leading most coalition-building efforts. President Essebsi’s office controls the lion’s share of the national budget; in 2018, the budget for the office of the president alone was 109 million dinars ($39.1 million), almost four times the budget for the parliament (31 million dinars, or $11.3 million). Members of the parliament consequently lack staff and office space. They rarely travel outside Tunis to meet with constituents or influence the bills that their party leaders tell them to vote on. These and other weaknesses prevent the parliament from operating as an independent center of power.[9]

Tunisia has struggled to achieve an independent judiciary. Most worrisome, the Constitutional Court has yet to be established even though the constitution mandated that it be formed before November 2015. The court has become a bone of contention among political parties, and the process for selecting nominees suffers from a severe lack of transparency. The Supreme Judicial Council (CSM), a new body tasked with managing Tunisian prosecutors and judges and guarding against executive overreach, is weak and dysfunctional. Despite being fully constituted in 2016, it has been plagued by infighting and criticized for its inability to carry out its duties. The Administrative Court, whose members are appointed by President Essebsi, can still overrule the CSM’s decisions to discipline corrupt judges.

‘TOO IMPORTANT TO LOSE’: TUNISIA AND THE INTERNATIONAL COMMUNITY

The United States, the European Union, and the World Bank are the largest donors supporting Tunisia’s democratic development. As soon as the Constituent Assembly passed the 2014 constitution, US democracy funding for Tunisia increased by over 4,000 percent, from $500,000 in Fiscal Year (FY) 2015 to $20.89 million in FY 2016. (It then increased again to $40.99 million in FY 2017.) The EU’s democracy funding to Tunisia was nonexistent before the revolution, but by 2015, it accounted for 18 percent of the bloc’s €356 million aid package to the country, dubbed a “Marshall Plan” to support democratic consolidation.[10] The World Bank, for its part, has allocated $430 million to its “Urban Development and Local Governance” project to support Tunisia’s decentralization, which has helped improve the capacity of governance institutions at the local level.

At the same time, the democracy and human rights agenda in Tunisia has seemingly declined as a policy priority for the United States, measured through high-level public diplomacy. Top US officials—the president, the vice president, and the secretary of state—were actively engaged on Tunisia between 2010 and 2015, a period in which the country’s Freedom in the World status jumped from Not Free to Partly Free after the revolution and finally to Free following the adoption of the new constitution and subsequent elections. US secretaries of state made four visits to Tunisia, and top officials made dozens of public remarks about the country, including in the president’s State of the Union address. Such high-profile public diplomacy both reflects and drives intensive engagement at all levels of the US government on a given country or issue. Since 2015, however, there has been a steep drop-off in top US officials’ attention to Tunisia’s democratic transition. In fact, over the past three years there have been no visits or public statements by the president, vice president, or secretary of state on democracy and human rights challenges in Tunisia. This decline coincides with the country’s stalling and backsliding on reforms—despite the dramatic growth in US democracy assistance.

Research has shown that foreign aid tends to boost existing political institutions and inflate the power of ruling coalitions while making them further resistant to change, especially if the aid is not targeted strategically.[11] A senior development official in Tunis recently told Freedom House that one of the reasons reforms have stalled in the country is a lack of any consequences imposed by international donors for government inaction or backsliding. “Right now, no matter what, the Tunisian government still gets paid even if they do nothing. Donors and international partners continue to give money to Tunisia without demanding meaningful reforms because the country is deemed ‘too important to lose.’”

Democratic transitions are decades-long endeavors that require focused and high-level diplomatic attention from the international community. Despite some gains, primarily on women’s rights, the governing Nidaa Tounes party has been unwilling or unable to implement key reforms or revise outdated legislation to conform to Tunisia’s constitution. Uncritical support for the government and unconditioned foreign aid will not improve this record, and instead threatens to entrench the status quo.[12] Restarting public diplomacy and imposing conditions on programmatic assistance should be a priority if Tunisia is to have any chance of consolidating its democracy. Otherwise, the country may follow in the footsteps of other Arab states like Jordan or Egypt, which have received billions of dollars in aid over the past decade, but are further from achieving consolidated electoral democracies now than they were 10 years ago.

The following policy recommendations should serve as entry points for the US, EU, and World Bank to more effectively support Tunisia’s democratic consolidation.

[6] On the eve of the parliamentary vote, 24 NGOs said in a public statement that the draft law was unconstitutional and “would limit the principles of freedom of association.” For a translation of the statement, see https://pomed.org/wp-content/uploads/2018/07/Press-Release-Re-Draft-Law-30-2018.pdf?utm_source=Project+on+Middle+East+Democracy+-+All+Contacts&utm_campaign=ebac1539f9-Tunisia_Weekly_Update_170802_COPY_01&utm_medium=email&utm_term=0_75a06056d7-ebac1539f9-215970617.