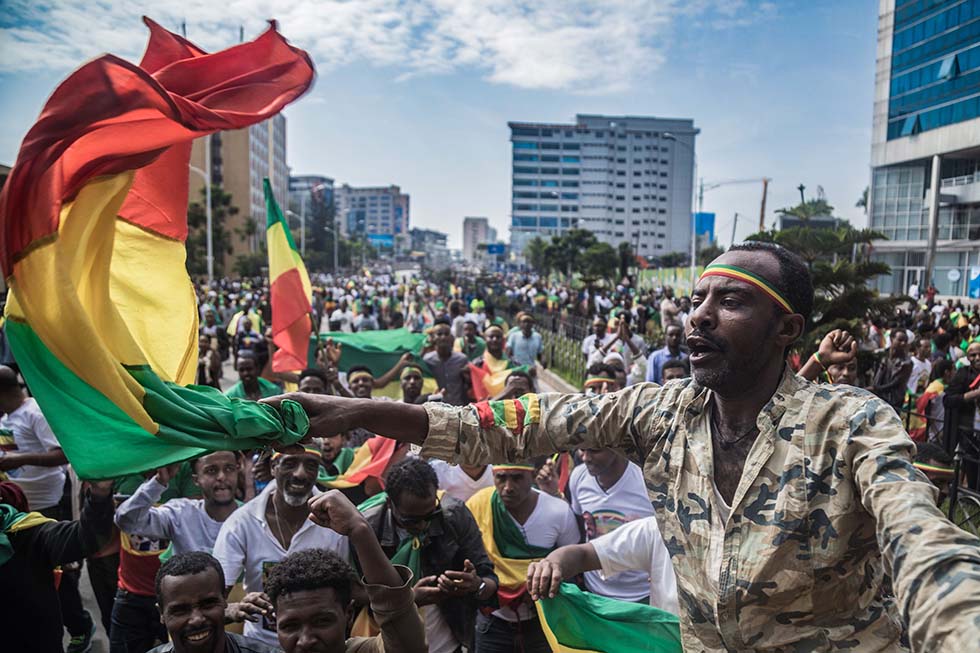 Ethiopia has seen dramatic political changes this year, but significant challenges remain. The United States should seize this opportunity to support a genuine democratic transition in a pivotal country.

THE RECENT BREAKTHROUGH IN CONTEXT

The EPRDF has ruled Ethiopia since 1991. Along with its affiliated ethnic-based parties, the EPRDF currently holds all 547 seats in the parliament. Uncompetitive elections and repressive laws on antiterrorism, civil society, and the media have been used to entrench the EPRDF’s authoritarian rule, effectively eliminating opposition parties and independent news outlets and stifling all forms of dissent. Freedom House has rated Ethiopia as Not Free since 2011.

Ethiopia is a country of genuine strategic importance. Home to more than 100 million people and with high population growth rates, it is projected to be among the world’s 10 most populous countries by 2050. The economy is a potential juggernaut, posting a 10 percent GDP growth rate in 2017, according to the World Bank. Ethiopian troops play critical roles in UN peacekeeping missions around the world. The country is poised to become an important power in the pivotal Red Sea region.

In the first eight months of 2018, Ethiopia has experienced a head-spinning series of events. In January, the EPRDF declared that it would respond to intensifying antigovernment protests that began in November 2015 by pursuing meaningful reforms, including the revision or repeal of laws that tightly constrained politics, preparations for free and fair elections, and the release of political prisoners. In the ensuing months, thousands of prisoners were freed, and the notorious federal crimes investigations unit in Addis Ababa, commonly known as Maekelawi, was closed.

In April 2018, Abiy Ahmed—a 42-year-old former military officer from Ethiopia’s largest ethnic group, the Oromo—was selected by the EPRDF as prime minister following the resignation of his predecessor, Hailemariam Desalegn.

Abiy quickly embarked on a tour of the country, conducting town-hall meetings and listening to constituents whose voices are rarely heard.

Crucially, Abiy moved to end 20 years of hostility with neighboring Eritrea, meeting three times with that country’s reclusive leader, Isaias Afwerki. He went further by meeting with leaders of over 50 opposition parties and declaring that a strong multiparty system based on the rule of law and human rights was essential for Ethiopia. On a trip through the United States, with stops in Washington, Minneapolis, and Los Angeles, he engaged with exiled opposition leaders and other members of the diaspora in an effort to show a commitment to reconciliation.

For Ethiopians in the country and abroad who are accustomed to an authoritarian EPRDF that prioritizes economic growth and stability over political and civil rights, the pace and breadth of these changes are exhilarating.

Abiy’s reforms will not go unchallenged. Power struggles within the EPRDF leadership and its affiliated ethnic-based parties continue to simmer. In particular, the Tigrayan People’s Liberation Front, representing a minority ethnic group that has exercised outsized control over the government for decades, stands to lose influence and could be a spoiler. The government blames disgruntled elements in the party and government structures for recent instances of violence, including a grenade attack at a pro-Abiy rally in Addis Ababa in June. A pivotal EPRDF party congress scheduled for September could ratify Abiy’s authority and the party’s new direction. But escalating ethnic-based conflicts throughout the country—especially in the Somali and Oromia regions—also threaten to derail reforms.

American influence on Ethiopia’s homegrown reform process will be limited, but there are a number of opportunities for positive engagement.

To encourage democratic progress in Ethiopia and consolidate recent gains, US policymakers should do the following.