Breaking Down Democracy: Goals, Strategies, and Methods of Modern Authoritarians

The 21st century has been marked by a resurgence of authoritarian rule that has proved resilient despite economic fragility and occasional popular resistance. Modern authoritarianism has succeeded, where previous totalitarian systems failed, due to refined and nuanced strategies of repression, the exploitation of open societies, and the spread of illiberal policies in democratic countries themselves. The leaders of today’s authoritarian systems devote full-time attention to the challenge of crippling the opposition without annihilating it, and flouting the rule of law while maintaining a plausible veneer of order, legitimacy, and prosperity.

Central to the modern authoritarian strategy is the capture of institutions that undergird political pluralism. The goal is to dominate not only the executive and legislative branches, but also the media, the judiciary, civil society, the commanding heights of the economy, and the security forces. With these institutions under the effective if not absolute control of an incumbent leader, changes in government through fair and honest elections become all but impossible.

Unlike Soviet-style communism, modern authoritarianism is not animated by an overarching ideology or the messianic notion of an ideal future society. Nor do today’s autocrats seek totalitarian control over people’s everyday lives, movements, or thoughts. The media are more diverse and entertaining under modern authoritarianism, civil society can enjoy an independent existence (as long as it does not pursue political change), citizens can travel around the country or abroad with only occasional interference, and private enterprise can flourish (albeit with rampant corruption and cronyism).

This study explains how modern authoritarianism defends and propagates itself, as regimes from different regions and with diverse socioeconomic foundations copy and borrow techniques of political control. Among its major findings:

In subsequent sections, this report will examine the methods employed by authoritarian powers to neutralize precisely those institutions that were thought to be the most potent weapons against a revitalized authoritarianism. The success of the Russian and Chinese regimes in bringing to heel and even harnessing the forces produced by globalization—digital media, civil society, free markets—may be their most impressive and troubling achievement.

Modern authoritarianism is particularly insidious in its exploitation of open societies. Russia and China have both taken advantage of democracies’ commitment to freedom of expression and delivered infusions of propaganda and disinformation. Moscow has effectively prevented foreign broadcasting stations from reaching Russian audiences even as it steadily expands the reach of its own mouthpieces, the television channel RT and the news service Sputnik. China blocks the websites of mainstream foreign media while encouraging its corporations to purchase influence in popular culture abroad through control of Hollywood studios. Similar combinations of obstruction at home and interference abroad can be seen in sectors including civil society, academia, and party politics. 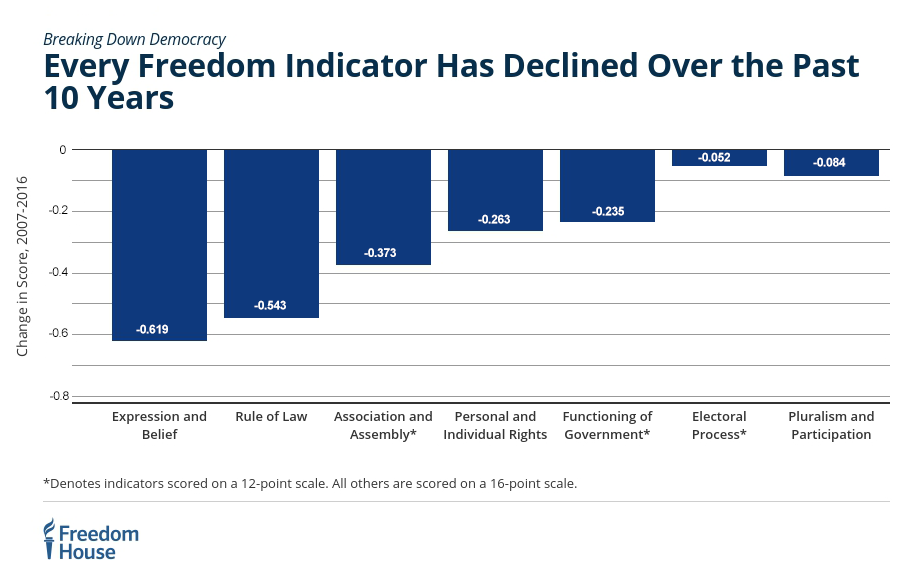 The report draws on examples from a broad group of authoritarian states and illiberal democracies, but the focus remains on the two leading authoritarian powers, China and Russia. Much of the report, in fact, deals with Russia, since that country, more than any other, has incubated and refined the ideas and institutions at the foundation of 21st-century authoritarianism.

Finally, a basic assumption behind the report is that modern authoritarianism will be a lasting feature of geopolitics. Since 2012, both Vladimir Putin and Xi Jinping have doubled down on existing efforts to stamp out internal dissent, and both have grown more aggressive on the world stage. All despotic regimes have inherent weaknesses that leave them vulnerable to sudden shocks and individually prone to collapse. However, the past quarter-century has shown that dictatorship in general will not disappear on its own. Authoritarian systems will seek not just to survive, but to weaken and defeat democracy around the world.