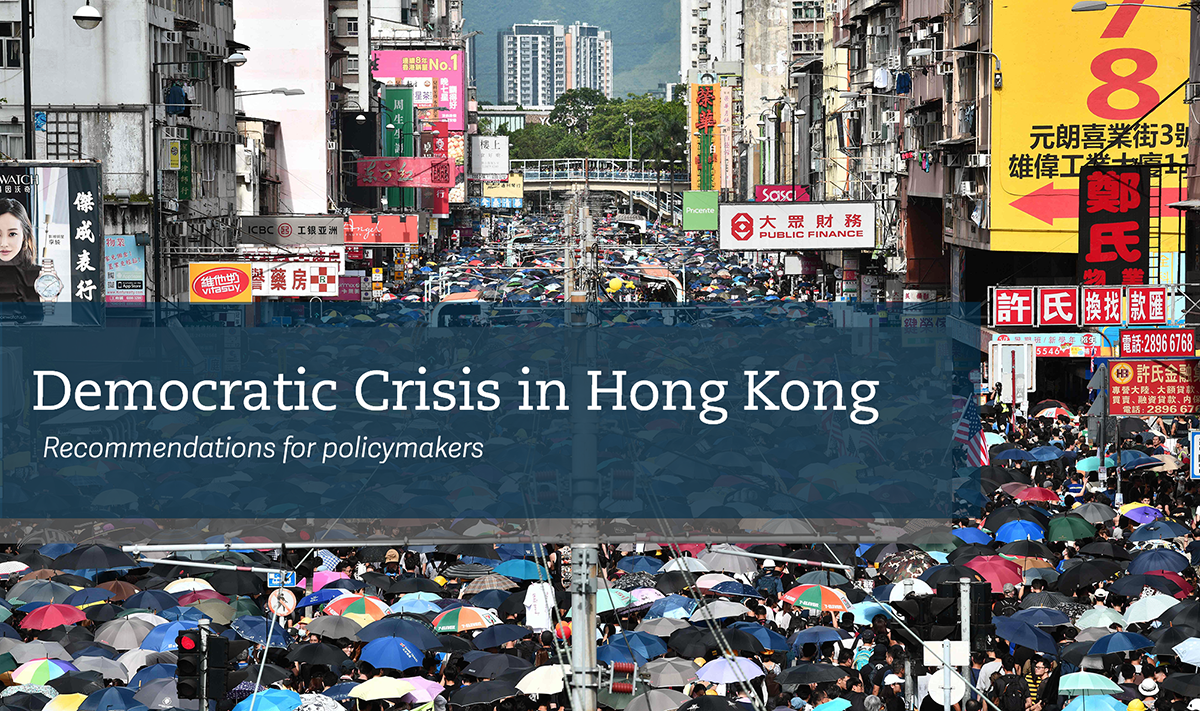 Crowds of Hong Kong protesters defied a police ban and began gathering in a town close to the Chinese border to rally against suspected triad gangs who beat up pro-democracy demonstrators there last weekend. Photo credit: ANTHONY WALLACE/AFP/Getty Images.

Millions of people in Hong Kong are protesting democratic deterioration and rights violations, amid increasing police brutality and other violence against them. The United States and other democracies must take strong, immediate action to stand with the people of Hong Kong in their defense of democratic values.

Massive protests, at times swelling to nearly two million people, have rocked Hong Kong since March 31, 2019. The demonstrations began in opposition to proposed amendments to Hong Kong’s extradition laws, but have since grown to encompass the public’s frustration over democratic deterioration and rights violations. Attacks on largely peaceful protesters by police and mobs linked to organized crime groups known as triads have resulted in hundreds injured and dozens hospitalized.[1] [2] [3]

The response by Hong Kong government leaders to the demands of peaceful protesters, and the violence committed against them, has been unsatisfactory and disproportionately aggressive, and has exacerbated the protesters’ frustration. As a result, some activists are undertaking more assertive forms of civil disobedience, including occupying the international airport and blocking major traffic thoroughfares; in early July,[4] tensions led protesters to storm the Legislative Council (LegCo). Wide-ranging work stoppages—including among civil servants, air-traffic controllers, and workers at Hong Kong’s Disneyland—also reflect the scale of public frustration with Hong Kong Chief Executive Carrie Lam’s administration and with Chinese government interference in Hong Kong.[5]

Meanwhile, the Chinese government is seeking to control and influence the narrative about the Hong Kong protests through its robust media censorship and propaganda systems— not only in mainland China, but also in Hong Kong, and internationally.[6]

Even more alarming, the Chinese government, which has a garrison of 6,000 troops stationed in Hong Kong and thousands more across the border,[7] has responded to the movement with increasingly threatening rhetoric, including suggestions that future protests could be met with violent suppression by the Chinese military.[8] US officials have noted a sudden amassing of Chinese troops on the Hong Kong border,[9] and Chinese state media released a propaganda video showing violent suppression by the People’s Liberation Army Hong Kong garrison of a Hong Kong–like urban protest.[10] Hong Kong–watchers are concerned the situation could rapidly deteriorate, and even escalate to the type of violence committed by the Chinese military during the 1989 Tiananmen Square Massacre.

The proposed amendments that sparked the protests would allow Hong Kong residents, foreign residents, and visitors to be extradited to mainland China, where they would not be guaranteed a fair trial and may be subject to torture and other human rights abuses.[11] The amendments to the relevant laws—the Fugitive Offenders Ordinance and the Mutual Legal Assistance in Criminal Matters Ordinance—were announced in February 2019, and formally introduced in the LegCo on April 3.

Facing sustained protests against the proposals, Lam on June 15 announced their suspension, but has not fully withdrawn them. Demonstrations have since continued, and participants’ demands now include an independent investigation into police violence against protesters, the release of jailed demonstrators, and Lam’s resignation.

Though protesters have remained largely peaceful, Hong Kong’s police force has responded with increasing violence—attacking journalists,[12] firing tear gas and rubber bullets at protesters at dangerously close range, beating some with batons and shields, and reportedly roughing up those inside train stations waiting to return home.[13]

Protesters have also faced violence at the hands of mafia-like triad groups. On July 21, a mob that included a large number of triad gang members attacked peaceful protesters and further entered a train station and trains to attack innocent bystanders, including a pregnant woman.[14] Hong Kong police were captured on video ignoring repeated requests for assistance, and leaving the scene.[15] At least 45 people were injured, including one critically, in the incident, which represented the worst such violence in Hong Kong’s recent history.[16] On July 31, at least 10 protesters were wounded in a drive-by fireworks attack.[17]

The Chinese Communist Party has long made use of hired gang members and criminals as proxies to assault critics in Hong Kong and Taiwan.[18] The most recent triad attacks, combined with the Hong Kong police force’s failure to respond, point to the Hong Kong government’s complicity in violent reprisals against peaceful protesters, as well as the Chinese government’s involvement and increasingly blatant violation of the “one country, two systems” framework. These dynamics—along with allegations that plainclothes police disguised as protesters have mixed among them and carried out or incited violence against police to tar the movement’s reputation—have contributed to a severe lack of public trust in the Hong Kong authorities, exacerbating unrest.

The “one country, two systems” framework

Hong Kong, a special administrative region of the People’s Republic of China (PRC), was governed by Great Britain from 1851 until oversight was returned to China on July 1, 1997. Before the handover, due to concerns about China’s poor governance and human rights record, the British and Chinese worked out specific terms by which Hong Kong would be governed. These are laid out in the 1984 Sino-British Joint Declaration[19] and expanded upon in the Basic Law, which serves as Hong Kong’s constitution.[20]

These documents outline what has come to be known as the “one country, two systems” framework, under which Hong Kong is supposed to retain “a high degree of autonomy, except in foreign and defense affairs;” a separate financial center; executive, legislative, and independent judicial power; unchanged social and economic systems encompassing “rights and freedoms, including those of the person, of speech, of the press, of assembly, of association, of travel, of movement, of correspondence, of strike, of choice of occupation, of academic research, and of religious belief.”

The terms laid out in both the Joint Declaration and Basic Law were to remain unchanged in text and interpretation for 50 years, until July 1, 2047. Article 5 of the Basic Law states, “The socialist system and policies shall not be practised in the Hong Kong Special Administrative Region, and the previous capitalist system and way of life shall remain unchanged for 50 years.”

Freedom House has tracked a decline in democracy and human rights conditions in Hong Kong over the last decade, alongside increasing interference by the Chinese government in local affairs. Recent incidents reflecting democratic deterioration include police failures to protect 2014 Umbrella Movement pro-democracy protesters from violent counterprotesters, violence against the protesters by police themselves, and the imprisonment of the movement’s leaders; the expulsion of LegCo members following the Chinese government’s decision to reevaluate Hong Kong’s oath-taking rules for lawmakers; the detention by Chinese authorities of Hong Kong residents, including at least one who was abducted and transported to China; the apparent imposition of the Chinese government’s interpretation of Basic Law on Hong Kong courts; and sustained attacks on the media, including violent assaults against journalists and media owners critical of Beijing.[21]

Hong Kongers have been vocal about deteriorating conditions. In addition to the 79 days of mass protests sparked in 2014 by the Umbrella Movement, protests erupted earlier, in 2012, over attempts to amend Hong Kong’s school curriculum to include overtly pro-CCP material. And in 2003, the proposal of controversial security laws opponents said could undermine press and religious freedom and criminalize public advocacy sparked huge demonstrations that ultimately prompted the provisions’ withdrawal.[22]
Participants in the 2019 Hong Kong protests—which have been the largest to date—are quick to note that they are not asking for new rights they do not currently possess under the law. Rather, they are rallying to defend the rights to which they are supposed to be guaranteed under the “one country, two systems” model.

Financial implications: Hong Kong, a major financial hub in Asia, has long attracted foreign investment due to its reputation for good governance, rule of law, and the protection of rights, including labor and intellectual property rights. It has continued to thrive following the 1997 handover because, despite more aggressive encroachment in recent years, it has thus far been able to maintain some degree of functional autonomy from the PRC. Destabilization of Hong Kong’s financial markets due to further attempts by the PRC to undermine the rule of law and the “one country, two systems” model would have serious negative financial consequences not only for Hong Kong, mainland China, and Asia, but also for investors from the US, Europe, and other democracies.

Security implications: In 2017, there were more than 22,000 US nationals living in Hong Kong, and 1.2 million US visitor arrivals.[26] There are hundreds of thousands more Americans living in or visiting countries in Asia, including tens of thousands of US military personnel deployed in the region.[27] The United States also has security agreements with partners across Asia, including Japan, the Philippines, South Korea, and Thailand, with special attention given to Taiwan.

Violence by Hong Kong police, the Chinese People’s Liberation Army, or their vigilante proxies puts the tens of thousands of Americans in Hong Kong on any given day at risk. And, violence or worsening unrest in Hong Kong has the potential to destabilize a region already complicated by a number of major territorial disputes, endangering Americans elsewhere in Asia.

The Chinese government agreed to, and is supposed to be bound by, the terms laid out in the 1984 Sino-British Joint Declaration and in Hong Kong’s Basic Law. Though the CCP has routinely violated its own domestic laws on human rights and governance in mainland China, increasing violations of the “one country, two systems” model in Hong Kong are a troubling escalation signaling that the Chinese government cannot be trusted to uphold international and bilateral legal agreements. A weak international response to existing violations and further escalation sets a dangerous precedent for potential future Chinese Communist Party aggression, and undermines global legal norms more broadly.

The coming weeks are a critical period for the future of democracy, human rights, and prosperity in Hong Kong. History has shown that authoritarian rulers act more assertively when met with a permissive international environment. The United States and other democracies must take strong, immediate action to defend their own economic and security interests, to stand with the people of Hong Kong as they defend their democratic rights and freedoms, and to communicate the risks China faces should the situation deteriorate further.

Recommendations for the US government

Recommendations for the Hong Kong Government:

Recommendations for the Chinese government:

[7] Iain Marlow and Jeanny Yu, “How Many Chinese Soldiers Are in Hong Kong and Why,” Bloomberg, August 12, 2019, https://www.bloomberg.com/news/articles/2019-08-12/how-many-chinese-soldiers-are-in-hong-kong-and-why-quicktake.

[10] China News 中国新闻网(@Echinanews), “PLA #HongKong garrison shows its commitment to safeguarding the country's sovereignty and security, as well as Hong Kong's prosperity and stability through a video released on Wednesday,” August 1, 2019, https://twitter.com/Echinanews/status/1156827062230867968.