Ever Farther Union: Balkans and the Brexit | Freedom House
Skip to main content 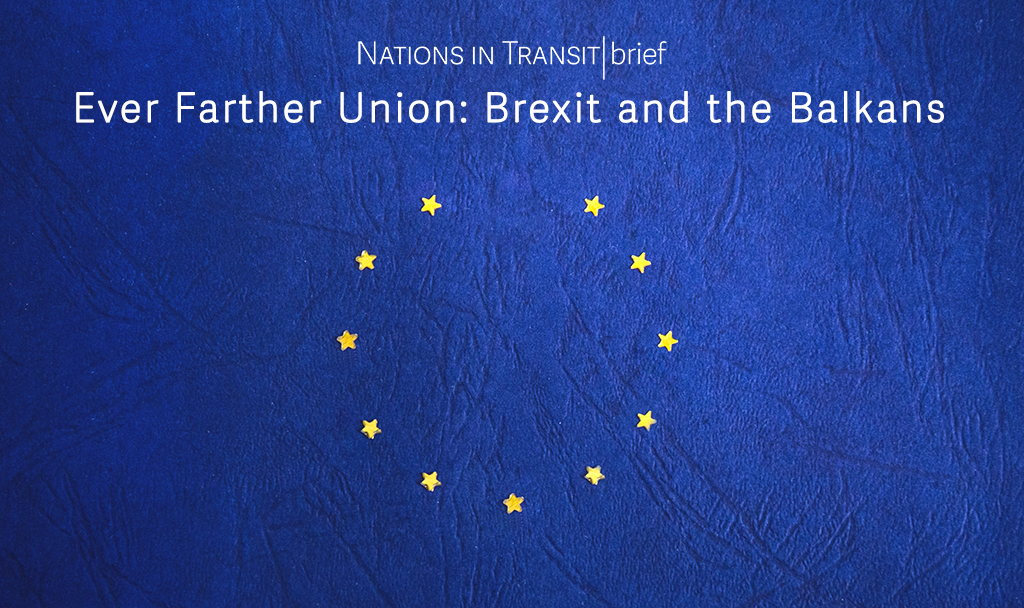 Ever Farther Union: Balkans and the Brexit

This brief examines how Brexit will damage the EU’s influence on the development of democracy in this region. The Western Balkans are not only losing a key advocate for enlargement, but Brexit will consume the EU’s policy and bureaucratic apparatuses for years and reduce the interest in enlargement. Finally, Brexit will greatly diminish the pull of accession and thus the impetus for democratic reforms in the region.

Nearly a quarter century to the day after Slovenia and Croatia declared their independence from Yugoslavia, British voters have decided by a narrow, but clear, margin to leave the European Union. The repercussions of this vote will remain unclear for many weeks and months to come, as the implications are far reaching. Much will depend on decisions taken by British and EU leaders on a number of issues that will extend beyond the Brexit itself.

While the EU might be able to survive this latest crisis, just as it has weathered the debt crisis, the Greek crisis, and the refugee crisis, it will look very different than it does today and its ability to guide the Western Balkans towards stable, prosperous democracies appears much diminished.

The Brexit vote has resulted in considerable uncertainty that makes any prediction difficult. Yet it is this uncertainty itself that will be an important feature of Europe over the coming years and will influence policy making and bears considerable risks. The consequence of the Brexit is both structural—the ability of the EU to act and integrate new members—and normative—the ability of the EU to promote a particular type of democratic, consensus-oriented system of government.

The consequences for the Western Balkans

Even with all the uncertainties about specific outcomes, the implications of the Brexit vote for the Balkans are clear and wholly negative. The main question is not if the Brexit will damage EU accession and more importantly the development of democracy in the Western Balkans, but how much and for how long.

The EU accession process has been the key driver for political and economic reform in the Western Balkans for years. Serbia and Montenegro are in accession talks, Albania is a candidate, as is Macedonia—albeit with a question mark since the political crisis of the past year. Bosnia and Herzegovina submitted its EU membership application just a few months ago; Kosovo remains furthest way, but has recently concluded a Stabilization and Association Agreement.

But even as enlargement has continued, this technical process has lost much of its political support in the EU, and Balkan governments have often seemed ill at ease with committing to the reforms necessary for accession. The UK’s departure from the EU may be the last nail in the coffin for accession.

First, with Britain leaving the EU, the countries of the Western Balkans are losing a key advocate of enlargement. As many member states have become critical towards enlargement, the UK has promoted both enlargement and reform in the region vigorously. Together with Germany, it has been the only large EU country to drive EU policy making the region in the past decade. Now this advocate of enlargement will disappear. Of course, the UK will be able to encourage reforms and EU accession from outside, in a manner similar to the United States, which has supported EU enlargement and largely backed EU policies in the region. However, the credibility of such a UK policy after Brexit would be undermined as an extreme case of “do as I say, not as I do.”

Second, determining relations between Britain and the EU will be a Herculean task, not just for the UK, but also for the union. Not only all political attention, but also all of the bureaucratic apparatus of the EU will focus on managing this relationship. No matter what the outcome, this will absorb all the attention of the EU. The enlargement and reform process in the Western Balkans will thus became not just a side-show, but marginal and irrelevant from the EU perspective. By the same token, if the UK leaves but Scotland secedes and then seeks to remain, difficult questions will need to be resolved on how or if Scotland can remain without “joining” the EU once more. Such a legal and policy nightmare would complicate the disentanglement of the UK from the EU and occupy the attention of policy makers and civil servants in Brussels and EU capitals for years to come.

Third, if the EU is in an existential crisis, what point would there be to pursue membership? In particular, for Balkan elites whose commitment to reforms was already doubtful, EU accession has been a priority only due to the rewards from Western governments and the demands of a large share of voters. This calculation will likely now shift further away from both EU integration and reform, intensifying the trend of recent years. While the influence of Russia and Turkey in the Western Balkans is often overstated, they constitute attractive models of government for a number of regional leaders, who might seek to align their policies more with these and other non-EU actors.

Scenarios for Brexit and the Western Balkans

The first scenario would mean that Britain dissolves, with Scotland at least leaving, and possibly with Northern Ireland and other EU members holding referenda. Scotland might not be able to remain in the EU, but might be forced to renegotiate terms of accession in parallel with the UK leaving. The acrimonious and difficult negotiations will lead to worsening of relations between the EU and the UK and within the UK. At the same time, the Scottish referendum will encourage further referenda in Catalonia and elsewhere. With all attention on the UK and the future relationship, the ability of the EU to resolve other crises, including Greece or migration, will be diminished.

In such a scenario, the EU might find itself reduced, transforming into a structure with multiple layers of integration at different levels, and the emergence of a “core EU” in northern Europe. For the Western Balkans, the transformative dynamic of the EU would disappear and outright rejection of the EU and the associated reforms might prevail. In addition, secessionist movements in the region, such as in Republika Srpska, might be encouraged by the wider European dynamic to try their own hand at breaking away.

According to this scenario, Scotland leaves the UK but is able to stay in the EU, thus creating a backlash against Brexit as the high cost of the decision becomes clear for British voters left behind. This might facilitate a settlement that makes England, Wales, and Northern Ireland into a member of the European Economic Area, keeping the border with Scotland and Ireland open. In effect, the EU would still be able to operate, as the British experience discourages other referenda on leaving the EU or leads to their defeat. After a period of difficulties, the EU is able to resume enlargement, but the disintegration of the UK and the departure of England, Wales, and Northern Ireland results in a stronger German hegemony of the EU. EU accession for the Western Balkans re-emerges as a viable option after a number of years of crisis, and the European Economic Area (or a similar revived ante-chamber to the EU) fills he role of a more immediate step prior to full membership.

While a Scottish referendum and a success for independence seems likely in the aftermath of the Brexit vote, the handling of the UK position in its future relations with the EU can largely shape the future of the UK and its survival. If the UK defines a negotiation position that reflects the divided nature of the country and seeks to maintain “membership lite,” Scotland might be placated, and the country would survive. EU leaders might not like or accept such a move, as German Finance Minister Schäuble has stated in a recent interview for Der Spiegel, with European officials arguing that letting the UK have its cake and eat it too would only encourage others. However, to prevent too much acrimony, the EU might accept such a scenario. Consequently, the UK might remain an important (but diminished) international actor. For the Western Balkans, such a scenario would be the closest to the status quo, yet even here, the influence of the UK as an advocate for enlargement, the policy distraction of years of negotiation, and the loss of credibility for the EU would still severely diminish the pull of accession and reforms.

These three scenarios highlight the considerable risks that Brexit holds for the Western Balkans. With the EU self-absorbed and diminished, focused elsewhere for years to come, the countries of the region can no longer rely on the EU to promote reform and the consolidation of democracy. With the transformative appeal of the EU largely gone and its ability to act reduced, others will fill the void. In the short- and medium-term, this appears likely to empower semi-authoritarian leaders who will pander to the highest bidder, be they Turkey, Russia, China, or other powers or investors (including individual member states). Social movements, media and independent institutions will have fewer external allies to rely on. This could strengthen domestic engines of change, yet might also dampen them, if these movements lack normative models to appeal to beyond their borders. To counter this negative trend, key EU members, in particular Germany, but also the United States, might have to form coalitions to continue support for democratic change in the Western Balkans. Supporters of democracy will need to stop relying on EU accession as the answer. Without the risk of armed conflict, the Western Balkans are likely to remain a low priority, yet the seeping authoritarianism is not just a risk for the region, but part of a wider European malaise that cannot be ignored any longer.