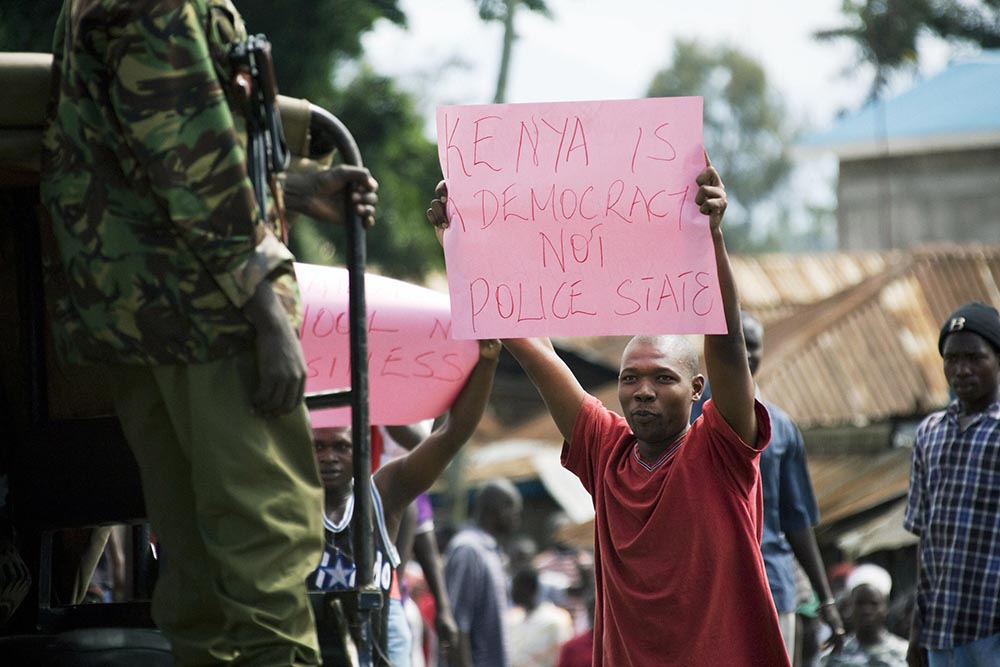 A supporter of Kenya's Opposition leader Raila Odinga shows a sign to a Kenyan policeman that reads 'Kenya is democracy not police state' during a demonstration in the street of Kisumu in 2008. Credit: YASUYOSHI CHIBA/AFP/Getty Images.
​
​
​

Kenya’s largely militaristic and security-focused approach to the fight against terrorism has raised questions about its commitment to human rights and the rule of law. The country has endured terrorist attacks by the Somalia-based militant group al-Shabaab, an affiliate of Al-Qaeda. The most prominent incidents include the September 2013 attack on the Westgate Shopping Mall in Nairobi, which killed at least 69 people and injured almost 200; the 2014 Mpeketoni attack, in which nearly 50 people died; and the 2015 attack on Garissa University College in Garissa County, which left 147 people, mostly students, dead.

Historically, Kenya’s vulnerability to terrorist attacks has been associated with its perceived closeness to Western powers (Mazrui, 2018). However, analysis of more recent trends have focused on Kenya’s military role in the region and the widespread recruitment of Kenyan youth into terrorist activities. Studies on the rise of extremist recruitment suggest that radicalization in Kenya is driven by perceived marginalization, socioeconomic inequalities, and high levels of unemployment (Mazrui, 2018).

Government efforts to counter this radicalization and rise in terrorism have resulted in sweeping police powers that have been used to perpetrate human rights abuses and silence government critics. The main antiterrorism legislation, the 2012 Prevention of Terrorism Act, provides only a vague definition of terrorism, greatly expands police powers, and allows the state to create lists of suspected terrorists and terrorist organizations without due process (Mazrui, 2018). In addition, the pervasive powers granted by the law have been to take abusive actions against organizations in contravention of constitutional requirements (KNCHR, 2015; Freedom House, 2016).

For instance, in the aftermath of the 2015 al-Shabaab attack on Garissa University College, two civil society organizations (CSOs) based in Mombasa County had their bank accounts suspended after they were accused of funding terrorism. However, the state was unable to prove the allegations in court. In a 2015 report, the Kenya National Commission on Human Rights (KNCHR) documented over 120 cases of egregious human rights violations, including 25 extrajudicial killings and 81 enforced disappearances, since the start of the crackdown against terrorism in 2013 (KNCHR, 2015). The Anti-Terrorism Police Unit (ATPU), a law enforcement agency, has come to be associated mainly with extrajudicial killings (Human Rights Watch, 2014).

In September 2016, the Government of Kenya launched a National Strategy to Counter Violent Extremism (NSCVE), which calls for a significant shift in approach, including the involvement of nonstate actors. NSCVE emphasizes “soft approaches” such as the provision of employment options, business opportunities, and life skills to reduce the recruitment of youth to violent extremism (NSCVE, 2016; Ogada, 2017). The strategy focuses on promoting national and community-level cohesion, constitutionalism, and the rule of law, and enhancing coordination and partnership among people and groups who work on countering violent extremism (CVE), including nonstate actors (Ogada, 2017). While this approach is in line with UN Resolution 1456 adopted in 2003, which obliges states to adhere to international human rights, refugee, and humanitarian law in the fight against terrorism, the government has not yet reoriented its actions and existing legislation to adhere to the NSCVE.

Background to the nanosurvey In 2017, Freedom House in partnership with Real-Time Interactive Worldwide Intelligence (RIWI) conducted a “nanosurvey” that sought to answer the question, why does democracy matter? The results were used to develop a strategy brief, which was discussed by a group of stakeholders and then disseminated to a larger audience. Written in the context of a global backlash against democratic values, the brief sought to gauge public opinion on various aspects of democracy.

From June 27 to July 27, 2018, Freedom House, again in partnership with RIWI, conducted a fresh online nanosurvey using RIWI’s random domain targeting methodology. This survey was designed to explore the relationship between human rights and the rule of law and Kenya’s fight against terrorism against the backdrop of concerns about lack of attention to “the structural factors that push youth to radicalization and extremist violence” (Mazrui, 2018).

The nanosurvey results reflect the opinions of 1,556 Kenyans who completed all 10 questions. Respondents were from different counties, professional or employment statuses, age groups, and sexes. However, the pool of respondents was limited to the internet-using population and therefore not statistically representative of Kenya as a whole. The majority of respondents were young, college-educated, urban males. In order to mitigate this bias and make the findings more reflective of Kenya’s demographic realities, the final findings are weighted against the most recent Kenyan census data for age and gender.

Key Findings The participation of citizens in governance is a central feature of a democratic state, as affirmed by Kenya’s constitution. When the survey respondents were asked about their principal role in democracy, 33 percent said that their task was to speak out against injustice, while 21 percent felt that voting every five years is their main role. Although voting in itself is not a sufficient condition for the existence of democracy, it is a useful indicator of engagement and has the potential to advance citizen participation in other areas of governance. Twenty percent felt that they had no role and would rather “mind their own business.”

Politics and ethnicity were the leading perceived causes of violent extremism, according to 22 percent and 16 percent of respondents, respectively. Ethnicity is a major instrument for political mobilization in Kenya. It also forms the basis for patronage, resulting in ethnic inequalities in the distribution of government jobs and other opportunities. Of the remaining respondents, only 5 percent cited religion as the main cause. This finding is significant, as it negates the assumed relationship between Islam and terrorism. Respondents also noted poverty, unemployment, and inequality as contributors. The link between economic status and violent extremism is important in prioritizing responses.

A strong majority of respondents (78 percent) affirmed that adhering to the rule of law and human rights when fighting terrorism is “very important,” while only 8 percent said it was “not important at all.” This shows that Kenyans, though keen to see the scourge of terrorism diminished, are concerned about the human rights violations that can accompany antiterrorism campaigns.

To goverment agencies to:

To civil society organizations and other nonstate actors