The United States Hesitated to Protect Europe’s Jews from Nazi Brutality. We’re Not Condemned to Reenact That Error Today.

American politicians and citizens waited too long to try to save Jewish victims of the Nazi Holocaust, as a PBS documentary airing this month demonstrates. We cannot afford to show the same torpor when facing ethnic discrimination or destruction today. 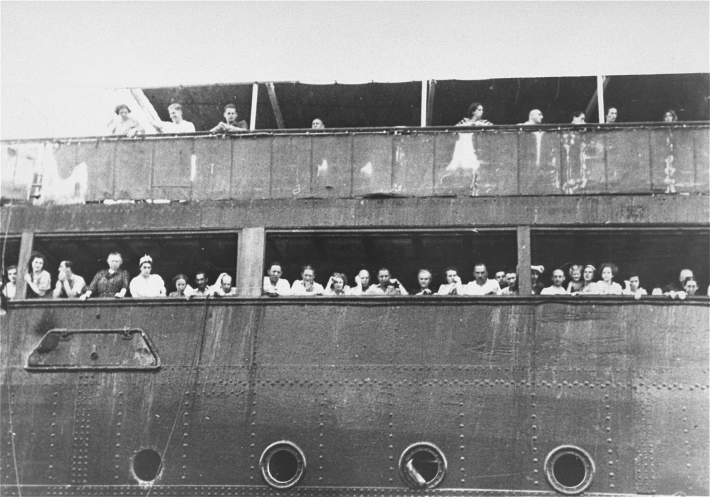 Jewish refugees aboard the MS St. Louis attempt to communicate with friends and relatives in Cuba, who were permitted to approach the docked vessel in small boats.

When Freedom House was founded 80 years ago, America was in the middle of one of the most tumultuous periods in its history, marked by economic depression, a flirtation with extremist ideologies, and intense isolationism that saw many Americans resist active US involvement in the Second World War.

This period provides the backdrop for a powerful new documentary from Ken Burns, Lynn Novick, and Sarah Botstein, The US and the Holocaust, which premieres September 18 on PBS. The film examines the story of the Holocaust from the perspective of America at the time and asks a painful question: Why was more not done by the United States to stop the unfolding horror in Europe in the 1930s and ‘40s, and to rescue the millions of Jews in harm’s way?

There is no compact or convenient answer, though there was ample warning. As the film documents, Americans became quite aware of the Nazis’ brutality soon after Adolf Hitler took power in 1933. And yet, saving or protecting Europe’s Jews was not a priority for the US government or the public. While President Franklin Delano Roosevelt eventually mustered an alliance that would crush Nazi Germany, the filmmakers painstakingly show how antisemitism, xenophobia, economic calamity, and isolationism limited the American response to the Holocaust.

Burns, Novick, and Botstein spend much of the documentary’s running time on the highly restrictive immigration rules that prevented many Jewish families—including, as memorably told, that of Anne Frank—from escaping to America. In the end, the United States accepted more Jewish refugees than any other country in the world, but hundreds of thousands were stranded and murdered for lacking what anti-Nazi journalist Dorothy Thompson, one of Freedom House’s earliest board members, then described as a “piece of paper with a stamp on it.”

What ailed and still ails us

I was honored to serve as an adviser for the film based on my experience working on an exhibition on the same topic at the US Holocaust Memorial Museum, a project that inspired the filmmakers. I watched the film while considering Freedom House’s ongoing mission to counter threats to freedom and democracy; in that light, it was remarkable how relevant the movie feels, even as it recalls a genocide that took place nearly a century ago.

The filmmakers are unsparing in examining the fragility of democracy. They remind viewers how quickly the Nazis transformed Germany from one of the world’s most vibrant democracies to a one-party state capable of the most inhumane actions against human beings imaginable, including genocide. They are just as explicit when they train their lens on the historical failures of our own democratic order: Jim Crow laws that codified racist treatment towards African Americans served as an inspiration to the Nazis as they formulated their own evil policies.

The film also shows that susceptibility to demagoguery has often been a dangerous feature, not a bug, of US democracy. Figures like antisemitic radio priest Charles Coughlin and Charles Lindbergh, the famed aviator, exerted outsized influence in American life with their bigoted claims against Jews. Lindbergh’s America First movement, which sought to keep the United States out of the war, was no small factor in the formation of Freedom House in 1941.

Two of Freedom House’s founding patrons, First Lady Eleanor Roosevelt and 1940 Republican presidential candidate Wendell Willkie, feature in the film. Eleanor was particularly aggressive in pressing her husband to support refugees. Willkie, meanwhile, is quoted describing one of Lindbergh’s speeches as “the most un-American talk made in my time by any person of national reputation.”

Popular hostility to immigrants, another familiar phenomenon for American viewers, represents a major theme of the film. Polls conducted in the 1930s and 1940s showed consistent opposition to loosening the immigration quotas imposed in 1924, even after the Nazis overran Europe in the late 1930s. The US Congress even rejected making exceptions for refugee children, while the State Department worked diligently to deny visa requests from doomed Jews in Europe. One of the quotes resurrected by Burns, Novick, and Botstein will sound all too current. “If I had my way about it at this hour,” Senator Robert Reynolds said on the Senate floor in 1941, “I would today build a wall about the United States so high and so secure that not a single alien or foreign refugee from any country upon the face of this earth could possibly scale or ascend it.”

In the end, the film underscores a clear lack of imagination among policymakers and ordinary citizens about the threat Nazism represented to democracy and humanity—and the unwillingness and inability of government officials to confront Hitler until it was too late for the 6 million Jews who died in the Holocaust. In that respect, the film highlights how early action, even if difficult, is crucial in preventing dictators’ threats from metastasizing. That point cannot be emphasized enough, as democracies again face potent threats from authoritarian regimes.

“Tyrants will go as far as you will allow them to go,” said Ambassador Deborah Lipstadt, now America’s special envoy to monitor and combat antisemitism and one of several Holocaust experts who provided commentary throughout the film. “They are always testing the waters. ‘Can I go further? Can I push stronger?’ And the America First [forces] and isolationists refused to acknowledge it.”

Eleanor Roosevelt is memorably quoted as the film closes. Reflecting on the consequences of American inaction in a 1946 speech, she said, “I have the feeling that we let our consciences realize too late the need of standing up against something that we knew was wrong. We have therefore had to avenge it, but we did nothing to prevent it. I hope that in the future, we are going to remember that there can be no compromise at any point with the things that we know are wrong.”

Those words ring especially true today, as decision-makers and citizens contend with situations they cannot easily reverse but can meaningfully challenge. Consider the Chinese regime’s malicious treatment of Uyghurs, who face internment, forced labor, and forced sterilization.  Governments have deported or detained Uyghurs who speak out about their people’s plight from abroad. While the United States has acted in response to this unfolding tragedy—by labeling the Chinese party-state’s treatment of the Uyghurs an act of genocide and by recently implementing the Uyghur Forced Labor Prevention Act, for example—we can do more to ensure that Uyghurs can find safety in America. Uyghurs seeking asylum in the United States have faced years-long processing delays but will hopefully receive more prompt attention and support as they seek freer lives in America.

In that 1946 speech, Eleanor warned, “We cannot live in an island of prosperity in a sea of human misery. It just can’t be done.” Democratic nations, including ours, risk repeating those mistakes by denying the rights of refugees, ignoring ethnic cleansing and genocide, and profiting from victims’ mistreatment. Too many Jewish people encountered awful ends due to indifference and hatred, but we are not condemned to reenact those errors today. As Uyghurs, and many others, look to the United States and other democracies as havens, the time is still right for us to live up to those expectations and to our consciences.