After 11J: What's next in the Cuban struggle for freedom

As we mark Independence Day in the United States this week, we are also reminded of the ongoing struggle people all over the world face in securing their political rights and civil liberties. 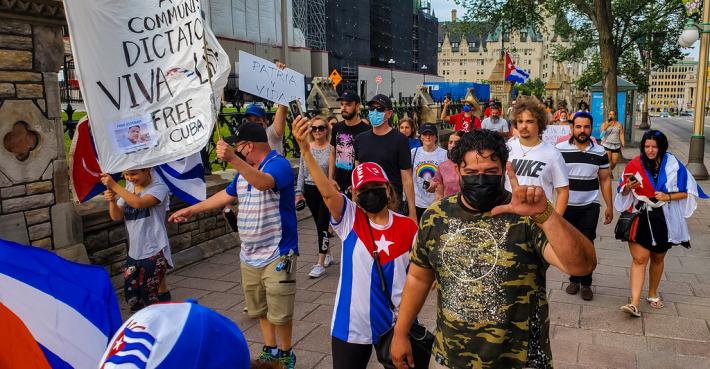 Monday, July 11, will mark the one-year anniversary of the J11 protests in Cuba, which were extraordinary for occurring in one of the world’s most repressive environments. To mark these historic protests, we interviewed Alessandra Pinna, director of programs for the Latin America and Caribbean region, to discuss what Cubans are doing to secure a freer future and how the international community can help.

Q:   Much of the world is unfamiliar with the current situation in Cuba. How would you describe the state of democracy there?

Cuba is a one-party state, with a political system that offers neither pluralism nor the separation of powers. Civil liberties, including freedom of speech, assembly, expression, and belief, are restricted. People living on the island do not benefit from the free flow of information and cannot safely engage in dissent. Journalists and human rights defenders (HRDs) are regularly harassed, detained, interrogated, threatened, and defamed in state-run media outlets like Granma and Cuba Debate.

Cubans already contend with poor housing conditions and worsening shortages of essential goods like food, medicine, and fuel. But now, Cubans must also grapple with the risk of power outages thanks to power plant malfunctions. In democratic countries, these deeply rooted difficulties would lead to street protests, but that behavior is thoroughly suppressed and even criminalized in Cuba. Today, there are over 1,000 political prisoners in the country, more than in Nicaragua and Venezuela combined.

Q:  What made last year’s protests so special to the people of Cuba?

First, the protests were especially large; in fact, they were the largest demonstrations Cuba has seen since the 1959 revolution. These protests were the result of months of collaboration between veteran dissidents, emerging leaders, new movements, and organized communities.

Second, J11 participants used the internet to persuade their neighbors to take part. As protesters took to social media under the #SOSCuba banner, others overcame their fear and made their voices heard on the streets of over 60 towns across the island.

Finally, protesters noted the link between their economic and political circumstances. International attention was largely focused on demonstrators’ concerns over food prices and goods shortages, but we should go deeper to identify the cause of this unprecedented social uprising. Protesters were motivated by their dissatisfaction of an illegitimate political system that allowed those issues to fester. Protesters chanted for “Freedom!” because it was clear to them that the shortages are the result of six decades of political monopolization, financial irresponsibility, and a total lack of accountability.

Q:   What has happened since the historic protests?

The regime immediately cracked down on protesters, and President Miguel Díaz-Canel Bermúdez encouraged security forces and government supporters to respond violently. Dozens were injured in clashes, and over 1,400 were detained according to Cubalex and Justicia 11J.In the past year, 600 people have been prosecuted for demonstrating; some have received prison sentences between six and 30 years, including minors. Some 700 people are still in detention as of last month. The regime has also refined its repressive tactics, weaponizing legislation to criminalize dissent. The first law enforced after J11, Decree Law 35, established new criminal prohibitions on publishing information online—a direct attack on social media, which was used to tremendous effect to embolden protesters.

By forcing HRDs into prison, forced exile, or hiding over the past year, the regime has neutralized an energetic movement that captured the hearts and minds of millions of Cubans and dampened prospects for future protests of the same scale.

Q: What can be done to help HRDs in Cuba?

While the J11 protests highlighted the Cuban people’s determination to demand greater freedoms, citizens—especially HRDs—remain vulnerable to a ruthless and sophisticated authoritarian regime. The international community cannot leave the Cuban people alone in their efforts to secure fundamental freedoms and accountability for human rights abuses.

The international community can pressure the Cuban government to refrain from repressive tactics like arbitrary detention. International actors should publicly demand the release of political prisoners like Freedom House Freedom Award 2022 winners Luis Manuel Otero Alcántara and Maykel Castillo Pérez, who respectively received five- and nine-year prison terms for expressing dissent through their artistic output in June. In addition, international actors can press Havana to allow visits from representatives of bodies like the UN Working Group on Arbitrary Detention. This way, conditions in Cuban prisons can be assessed and Havana can be held accountable for the treatment of political prisoners. The European Union can also leverage its engagement with Havana to good effect.

Moreover, defending internet freedom in Cuba is crucial. The international community should call on Havana to remove arbitrary internet-access restrictions and end online censorship. Actors should also expand their digital-security and digital-activism programming so that HRDs can circumvent state restrictions and protect themselves against surveillance.

Q:  Cuba has been under a repressive regime for nearly 60 years. Are you hopeful for the future independence of the Cuban people and Cuban civil society?

The J11 protests demonstrated that the government’s persistent inability to meet basic needs, coupled with ongoing repression, has eroded its legitimacy and weakened the social control it has cultivated over six decades. The glaring quality-of-life gap between ordinary citizens and government officials emboldened Cubans—even erstwhile regime supporters or those who had remained silent for fear of reprisal—to protest on July 11, 2021.

The Cuban regime has demonstrated its resilience and stamina, to be sure. For decades, it has refined its tools of repression and surveillance, allowing it to muffle—if not silence—even the loudest eruptions of dissatisfaction. After J11, scores of activists have been exiled, which will stymie the efforts of future generations. Moreover, as democratic nations face their own crises of legitimacy, Havana continues to strengthen its relationships with other authoritarian states, such as Russia, China, and Iran, learning and sharing tactics of suppression to remain in power.

Ultimately, the Cuban people are just as resilient in the face of repression, as evidenced by José Martí’s dedication to Cuban freedom in the 1800s and the present-day work of civil society groups like Las Damas de Blanco (The Ladies in White) and Movimiento San Isidro. Their constant efforts, then and now, offer hope. The Cuban people have found pockets of solidarity within their country’s restrictive environment and will not give up on their demands for freedom. Now is the time for the international community to lend their full support to the courageous activists and organizations who work fearlessly to achieve that aim.

Learn more about Cuba and the country's history on freedom and democracy by reading the latest Freedom in the World report, and visit our Latin America and Caribbean Programs page to learn more about Freedom House's programs in the region.