Turkish citizens prepare to vote in a plebiscite that could formalize a dictatorship. 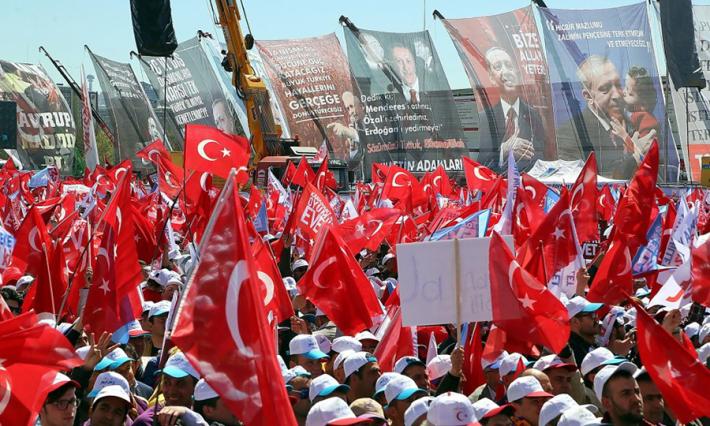 Turkish citizens prepare to vote in a plebiscite that could formalize a dictatorship.

This Sunday, Turkey will hold a referendum on changes to its constitution that would transform the country from a parliamentary to a presidential republic, concentrating power in the hands of President Recep Tayyip Erdoğan.

Erdoğan has pursued this greater responsibility despite an increasingly disastrous record of governance. For nearly four years, Turkey has been trapped in a cascade of crisis—protests, terrorist attacks, crackdowns, a coup attempt, purges, and war. The only blow the country hasn’t suffered is an economic crash, but that too seems imminent, as tourism and foreign investment have cratered and Erdoğan has subordinated fiscal and macroeconomic management to his short-term political agenda.

Dictatorship in the making

The proposed constitutional changes are not subtle. The post of prime minister and the Council of Ministers will be abolished. The president will be able to appoint and dismiss ministers without parliamentary approval, and dissolve the parliament to call new elections. Although Article 101 of the revised constitution limits the president to two five-year terms, there is a loophole in Article 116 that could allow a president to be reelected an unlimited number of times, because the clock restarts when an early election is called.

The president will be able to make laws by decree, a provision that the Council of Europe’s Venice Commission has warned could lead to legal uncertainty. The presidency also gains more control over the judiciary, including the Constitutional Court, through increased powers of appointment. In its expert opinion on the proposals, the Venice Commission stressed “the dangers of degeneration of the proposed system towards an authoritarian and personal regime.”

The changes would end the already largely semantic debate over whether Erdoğan is a dictator. If the referendum proposal passes, the 63-year-old could well be president for the rest of his days.

Referendum proponents say this is just what the country needs: stability. But their arguments are perverse. One holds that Turkey’s current disorder stems from the contradiction between the president’s de facto power and his de jure limits. The amendments are needed to legitimize, after the fact, Erdoğan’s demolition of the constitutional boundaries around his current office.

Another argument paradoxically claims that Erdoğan is both the greatest leader Turkey has had since Atatürk and in no way responsible for the escalating series of catastrophes the country has experienced during his rule. Rather they are the product of conspiracies, internal and external, against the indivisible Turkish people and their “reis,” or chief. Such raw populism is now taken for granted in Turkey—it is the air that everyone breathes in an increasingly stifling room. The “national will” has become a synonym for supporting Erdoğan, never mind that even in the presidential election of August 2014, 48 percent of voters chose a different candidate.

Given the warped campaign environment, the referendum proposal will probably pass. Turkey has been under emergency rule since the coup attempt on July 15, 2016. During that time, some 600 companies worth around $10 billion have been taken over by the state. More than 40,000 people have been arrested related to the coup investigations, and 130,000 have been fired from public service.

Moreover, the state has closed and seized the assets of around 150 media outlets, including national and local papers, magazines, radio stations, and publishing houses. There are 150 journalists in prison. Media affiliated with exiled cleric Fethullah Gülen have been eradicated, and mainstream outlets have been taken over. The country’s largest media group, Doğan, has been cowed by threats, lawsuits, and arrests. Only left-wing and Kemalist print outlets with limited readership are still able to criticize the referendum directly. “No” campaign events are banned due to alleged threats to public order, while daily “Yes” events headlined by the president run simultaneously on all the country’s television stations.

The state has also continued and extended investigations that were under way prior to the coup attempt. Ankara has removed and arrested the mayors of 50 cities governed by the Kurdish-oriented Peoples’ Democratic Party (HDP) and an affiliated party in the southeast, replacing them with so-called “trustees.” Eleven HDP parliament members are in prison, including the party’s coleaders Selahattin Demirtaş and Figen Yüksekdağ. Demirtaş would have been the most articulate voice of dissent from the left against the constitutional changes if he hadn’t been put behind bars in November.

Meanwhile, Erdoğan has worked hard to defang opposition from the right. Politically, he has completed a pivot—started in 2014—toward the Turkish nationalists he once alienated by negotiating with the Kurdistan Workers’ Party (PKK). Legally, he made sure the courts helped Devlet Bahçeli, the aging leader of the opposition Nationalist Action Party (MHP), beat back an internal dissident movement that opposes the constitutional changes. Bahçeli is now out on the campaign trail, half-heartedly urging his supporters to endorse a package of amendments he once mocked.

The mirage of authoritarian stability

Despite all this, it would not be a surprise if the “No” vote managed to reach 40–45 percent in what amounts to a referendum on Erdoğan himself. With all the resources the state has put behind the changes, in a vote held during a state of emergency in which dissenting media have been literally taken over by police, some two-fifths of the country is still not buying what Erdoğan is selling.

This should say something about the “stability” that the referendum will bring. Turkey is a large and diverse country—ethnically, religiously, and politically. Governing this complex polity demands the opposite of what the constitutional changes entail: more powers for local representatives, protection of minority rights, a lower electoral threshold for entering parliament, and room for political experimentation. Stability through force has not worked before, and it is not going to work now.