The regime’s recent media interventions may have unintended consequences. 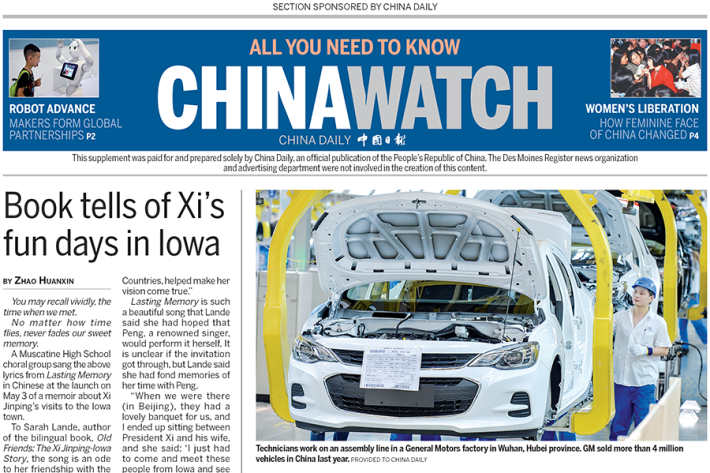 This paid supplement from state-owned China Daily was distributed in a September issue of the Des Moines Register.

The regime’s recent media interventions may have unintended consequences.

As friction between Washington and Beijing has intensified this year over issues including trade and the mass detention of ethnic Uighurs in Xinjiang, the Chinese government’s propaganda and censorship apparatus has sought to keep pace.

During the past month in particular, three existing trends in the Communist Party’s media policy have gained new prominence: a revival of Mao-era themes, suppression of negative content about the economy, and a push to deliver official narratives directly to US audiences.

But even as these efforts accomplish certain goals, particularly within China, they are also detrimental for the party in a number of important ways.

China’s leaders are bracing for the economic impact of a trade war with the United States, and state media have reverted to an old emphasis on “self-reliance.” On September 30, the flagship evening news program on state broadcaster China Central Television (CCTV) was dedicated to President Xi Jinping’s tour of three northeastern provinces. The coverage and Xi’s own comments stressed the need for China to be more economically self-reliant, invoking terminology that was used most commonly during the revolutionary period in the 1940s, in the midst of the Great Leap Forward famine of 1958–62, and in the latter years of the 1966–76 Cultural Revolution. Indeed, images of Xi visiting with Chinese peasants echoed famous iconography of Mao Zedong doing the same.

On October 16, another prime-time CCTV program focused on the quintessentially Maoist “reeducation” effort taking place in Xinjiang. The program sought to portray detention facilities for Muslim minorities as compassionate, humane, and air-conditioned “vocational training” centers. Grateful “students” reported in clearly scripted interviews that they have had an opportunity to improve their Mandarin, learn new skills like making pants, and better understand how to avoid “religious extremism,” concluding that “the party and the government saved me.”

No bad news on the economy

The authorities have actively intervened in news coverage to suppress any negative reporting on China’s economic situation. On September 11, for example, the popular online portal Netease was forced to suspend updates of its financial news channel. The company announced that it had undergone a profound “self-criticism” and intended to conduct a comprehensive “rectification” of content. In a similar vein, on September 26, the Cyber Administration of China (CAC) imposed a one-month suspension on the technology, news, and financial channels of Phoenix New Media, allegedly because the website and mobile app had violated rules on permissible news sharing.

On September 28, the New York Times reported that it had obtained copies of government directives sent to journalists and news websites requiring “management” of news and commentary on economic matters. The request covered any signs of a potentially slowing economy, the impact of trade tensions with the United States, and the negative effects these may have on ordinary Chinese.

Spikes in censorship of economic news have occurred before. A Freedom House analysis of leaked censorship directives found that in 2015, the year of a dramatic plunge in Chinese stock markets, the economy was the second most frequently targeted topic. But a September 9 article in Hong Kong’s Initium relayed interviews with several Chinese journalists who indicated that the current chill on economic reporting is likely to be a longer-term trend. Numerous interviewees covering finance, economics, and business said their beats were becoming steadily more “controlled” and “censored.” Some cited daily censorship notices that are copied by hand to counter leaks and monthly ideological training by CAC staff. One reporter from a radio station covering financial news explained, “The most invariable redline is that ‘singing of the decline of China’ is unacceptable.

In late September, the print edition of the Des Moines Register included a four-page China Watch supplement, paid for by the state-owned China Daily. Although such supplements have appeared for years in major newspapers like the Washington Post and the Wall Street Journal, this was the first known instance of China Watch appearing in Iowa. Moreover, the content of the propaganda was more targeted and politicized than is typical for China Watch features.

For example, rather than touting the Belt and Road infrastructure initiative or the promising investment climate in a Chinese province, two of the front-page articles described how a trade war would harm American soybean farmers and promoted a new book fondly recalling the time Xi had spent in Iowa as a young man. In addition to the supplement, China’s ambassador to the United States gave two high-profile media interviews in the last month that seemed designed to reach left- and right-leaning audiences—one on October 3 with National Public Radio and another on October 12 with Fox News.

While the Des Moines Register supplement was unusual, it was not the first instance of Chinese state media targeting soybean farmers in an apparent effort to sway US voters. In July, CCTV’s China Global Television Network (CGTN) released a two-minute animated video about the impact of trade tensions on the soybean industry, concluding with the question, “Will voters [in the 2018 midterm elections] there turn out to support Trump and the Republicans once they get hit in the pocketbooks?”

Financial data extracted by the Center for Responsive Politics from China Daily’s reports to the US Department of Justice under the Foreign Agents Registration Act (FARA) show the scale of Beijing’s propaganda efforts in the country. Since January 2017, the paper’s distribution company has reportedly spent over $15.7 million to influence US policy and public opinion, accounting for almost 60 percent of all spending by FARA registrants from China. In 2017, China Daily was the ninth largest foreign principal in terms of spending and the largest that was not itself a government.

The Communist Party’s censorship and propaganda tactics within China have suppressed the flow of information and generated self-censorship on a broad range of topics. But they could easily backfire by undermining public trust in official pronouncements. CCTV’s fawning program on so-called vocational centers in Xinjiang reinforced the broadcaster’s reputation as a government mouthpiece, and tighter censorship of economic news risks exacerbating fears about the country’s actual economic health.

Outside China, Beijing’s media efforts may be even more counterproductive. Several observers have questioned whether the China Watch supplement in Iowa would have the desired effect. Kirk Leeds, who heads the Iowa Soybean Association, told reporters, “I doubt farmers or many Iowans will be swayed.” Meanwhile, the animated CGTN video garnered just 21,000 views on YouTube, a miniscule drop in the ocean of American media.

Rather than persuading US audiences, the campaign has galvanized fierce criticism from top US officials, including President Donald Trump and Vice President Mike Pence. US ambassador to China and former Iowa governor Terry Branstad, who has long been friendly with Xi, appears to have been taken aback by the China Daily content in the Des Moines Register. In a September 30 op-ed in the same paper, he criticized China for “running propaganda ads in our own free press,” while noting that “one of China’s most prominent newspapers dodged the offer to publish” his article in response

The Chinese regime’s media controls have long had a detrimental effect on US-China ties, but as propaganda and censorship continue to escalate, bilateral relations are likely to get even rockier.

Sarah Cook is a senior research analyst for East Asia at Freedom House and director of its China Media Bulletin. This article was also published in the Diplomat on October 24, 2018.