Despite the quiet reversal of hard-earned democratic gains in the Balkans over the last several years, the European Union accession process still seems to be stuck on autopilot. 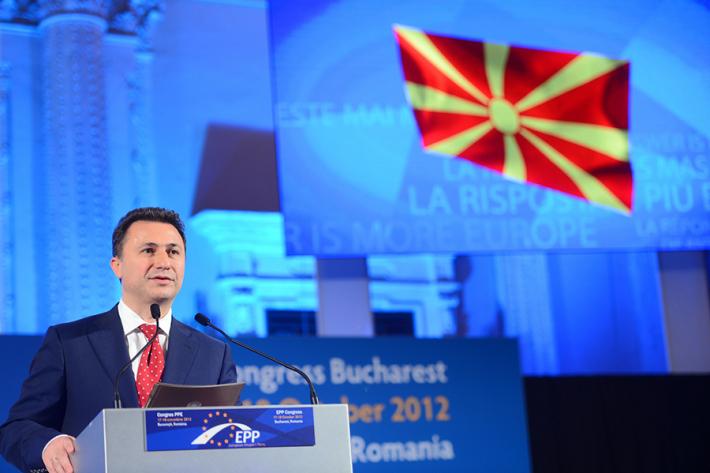 Despite the quiet reversal of hard-earned democratic gains in the Balkans over the last several years, the European Union accession process still seems to be stuck on autopilot.

The first decade of this century was a period of optimism for the Balkans. The wars of the 1990s had ended, ethnic hostility was subdued, and the countries of the region started on the long and bumpy road toward membership in the European Union (EU) and the North Atlantic Treaty Organization (NATO). Freedom House’s Nations in Transit (NIT) report recorded small but steady improvements across all indicators, including media independence, the judiciary, and even corruption. All countries in the former Yugoslavia and Albania have since gained EU membership, acquired formal candidate status, or are in some stage of the application process.

But for the past six years, NIT indicators have told a different story. According to the latest edition of the report, released last week, the average democracy score for the region—excluding Slovenia—has been in steady decline since 2010, and in 2016 it returned to the same value recorded 12 years earlier, in 2004. 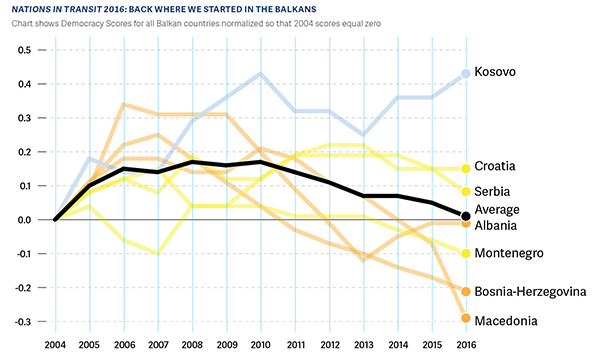 Events during 2015 illustrated and exacerbated these declines. Macedonia, which used to be among the better performers in the region, experienced a severe political crisis prompted by leaked recordings that revealed government involvement in mass surveillance, electoral fraud, corruption, and criminal activities. The crisis and related protests led to downgrades in six of the seven categories measured in NIT. Despite an EU-brokered agreement on early elections to be held this year, protests resumed last week, after the country’s president pardoned former prime minister Nikola Gruevski, who had headed the country for nearly 10 years, and dozens of other politicians facing criminal charges for involvement in the scandal.

Political protests have become an almost permanent feature in Kosovo and Montenegro. Kosovo, which registered a small gain in NIT for 2015 thanks to the functioning of municipalities in the north and some positive signs for independent media, began 2016 in a cloud of tear gas as protests against a deal granting greater autonomy to the country’s Serb minority turned violent, and opposition lawmakers repeatedly set off gas canisters in the parliament chamber. The election of Hashim Thaçi as president two weeks ago did little to restore calm. In Montenegro, opposition protests and demands for the resignation of longtime prime minister Milo Ðukanović were coupled with anti-NATO and pro-Russia demonstrations, highlighting the dangers of unchanneled disillusionment.

Trends in the remaining Balkan countries, with the possible exception of Albania, point toward a slow but steady erosion of democratic norms. Long-standing questions about the viability of state structures and crippling corruption in Bosnia and Herzegovina gained prominence in 2015, and clear signs of state capture in Serbia sent worrying signals to EU officials. Meanwhile, in Croatia, the only former Yugoslav country besides Slovenia to have joined the EU, improvements in electoral process were offset by an inability to investigate corruption and hold politicians accountable for their actions during the privatization era. 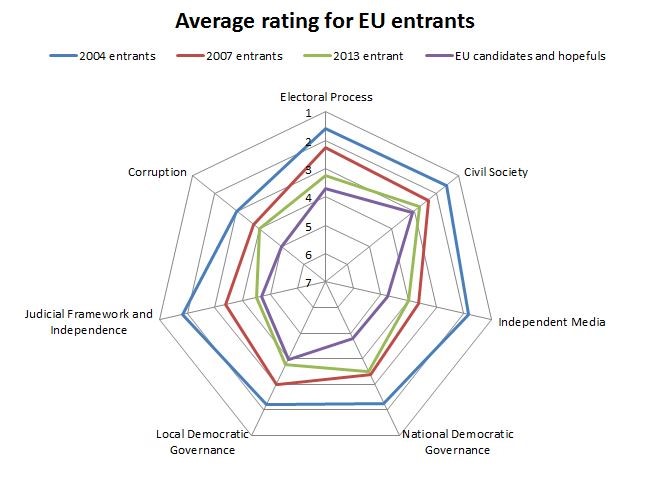 While accession criteria have become more stringent and the path to EU accession much longer in the past decade, some Balkan countries’ formal progress in a number of negotiation chapters has overshadowed the larger question of their readiness. As the chart above shows, with each round of accession, the EU took in countries that scored worse on democracy indicators than their predecessors. If official and potential candidates were to join today, they would lag far behind on all NIT indicators, faring worst on corruption and press freedom. Indeed, if one looks at negotiation chapters 23 and 24 on fundamental rights and justice—which have recently become priorities in the accession process—candidate countries do very poorly when compared with more technical areas, such as harmonizing tax laws.

The EU and the broader international community face a vexing set of problems in the Balkans. For the EU, the migrant crisis revealed an unpleasant interdependence that the region’s less scrupulous leaders were quick to turn to their advantage, presenting themselves as guarantors of stability in Europe’s time of need. Politicians in countries that are in the most advanced stage of the accession process, namely Montenegro and Serbia, have particularly benefited from their emphasis on this stability factor, while those with stalled negotiations, such as Macedonia, used the diversion to ditch genuine reform efforts. With several crises chipping away at democratic ideals in the heart of Europe, the union will certainly continue to suffer from an attention deficit in the future.

At the same time, the failure of the EU process to deliver better governance and economic opportunity is felt more and more acutely in the region. Public support for expansion of the bloc has waned significantly in member states, and European Commission president Jean-Claude Juncker said in 2014 that there would be no enlargement during his term. Yet the negotiations drag on, as if on autopilot, and the recent protests in the Balkans clearly show that people have run out of patience. Frustration with both local and European elites is finding new outlets in parties that express nationalist and anti-Western sentiments.

On top of all this, the union’s recent deal with Turkey strengthens the impression that the “carrot” of eventual accession is nothing but a political tool, employed haphazardly to serve the EU’s immediate strategic interests. This inconsistency encourages local politicians to act even more cynically, exploiting whatever leverage they have while continuing to prey on state resources. The question is how long the EU can exert influence in the region with an increasingly rotten carrot, and what it will do when other actors move in to take its place.