Beijing’s Coronavirus Propaganda Has Both Foreign and Domestic Targets

Disinformation peddled abroad may be most successful in China itself. 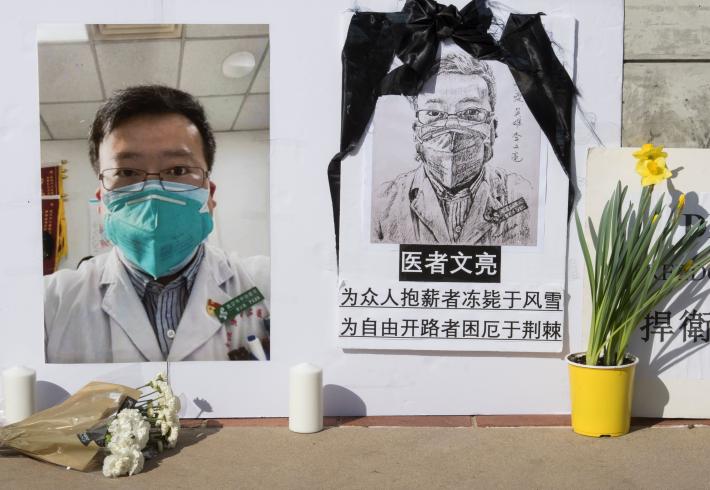 The Chinese Communist Party (CCP) regime is attempting to reshape global media discourse about the COVID-19 pandemic and effectively overwrite public information about its own mishandling of the outbreak.

Over the last month, CCP-backed media and other actors have pushed three narratives for a global audience: first, that China’s response to the crisis is a model for other countries to follow; second, that China is a global leader in the fight against COVID-19 and is providing aid to grateful nations; and third, that the coronavirus may have originated outside of China.

While there is at least a grain of truth in some of these claims, others—like the assertions that the pandemic began in the United States or Italy—amount to outright disinformation. The CCP messaging has notably been shared through both new disinformation networks and existing ones established on global social media platforms by Iran and Russia. It has also been disseminated within China to shore up the regime’s image at home.

A global megaphone in action

Beijing and its proxies have used four key strategies to reach global audiences:

While the CCP is clearly trying to manipulate global audiences with its narratives on COVID-19, it is also spreading them within China, aiming to fortify the regime’s legitimacy at a time when it is stretched thin.

Throughout March, media outlets and Beijing-friendly social media platforms in China similarly promoted the idea that COVID-19 emerged elsewhere, and not in Wuhan. In late March, Chinese media misrepresented statements made by a prominent Italian scientist to incorrectly imply that the virus had originated in Italy. On March 24, the popular Chinese news platform Toutiao published an article spuriously linking the coronavirus outbreak to a “mysterious pneumonia” that emerged among young e-cigarette users in 2019 in the United States. And on March 25, an article in the Global Times promoted the conspiracy theory that COVID-19 was brought to China by a US military athlete who participated in the World Military Games in Wuhan last October.

State media with Chinese audiences have expressed support for the same Chinese government figures who have promoted these fringe ideas on global social media platforms. In response to a March 12 tweet by Foreign Ministry spokesperson Zhao Lijian accusing the US Centers for Disease Control (CDC) of covering up cases of COVID-19 in late 2019, an article published by Xinhua encouraged Zhao to “keep asking questions.” While Twitter is blocked in China, screenshots of Zhao’s tweets have circulated on the Sina Weibo microblogging platform under the hashtag “Zhao Lijian sent out five consecutive tweets questioning the US,” and have been viewed millions of times.

Even as these narratives have been permitted to circulate widely, Chinese censors have moved quickly to silence other online discussions about the coronavirus. For example, they have deleted Weibo users’ expressions of support for the United States as it struggles to confront COVID-19.

For many in China, the government’s narratives appear to be convincing. Even when there is anger at the early handling of the outbreak, it is often directed at local officials in Wuhan rather than the central government or the CCP-controlled political system as a whole. Anecdotal evidence suggests that anti-US narratives in particular have been taking hold in segments of the Chinese public. The faltering responses to the outbreak in the United States and certain other democratic countries—of which there is no shortage of state media coverage in China—have also helped bolster the CCP’s claims that its own reaction was exemplary.

Outside China’s borders, the regime’s propaganda efforts have been undermined by factual journalism from independent media. In countries like Spain, the Netherlands, and the Czech Republic, news outlets have reported that many of the medical products and testing kits purchased from Chinese suppliers were found to be defective. In Africa, videos of local politicians castigating Chinese diplomats over the mistreatment of African expatriates in China—who have faced discriminatory suspicions that they are spreading the virus—circulated widely along with the hashtag #ChinaMustExplain.

In the coming days and weeks, as the COVID-19 death toll and related economic suffering rise around the world, the stakes of Beijing’s damage-control effort in the media will also increase. The Chinese regime will certainly continue—and even upgrade—its campaign of propaganda and disinformation. It is the responsibility of free media, democratic governments, and ordinary news consumers everywhere to remain vigilant in exposing and counteracting any false or misleading content at this crucial moment.

Sarah Cook is a senior research analyst for China, Hong Kong, and Taiwan at Freedom House and director of its China Media Bulletin.