New Freedom House research shows that the Chinese regime’s effort to shape global media is intensifying, but also that its impact has been blunted by democratic resilience. 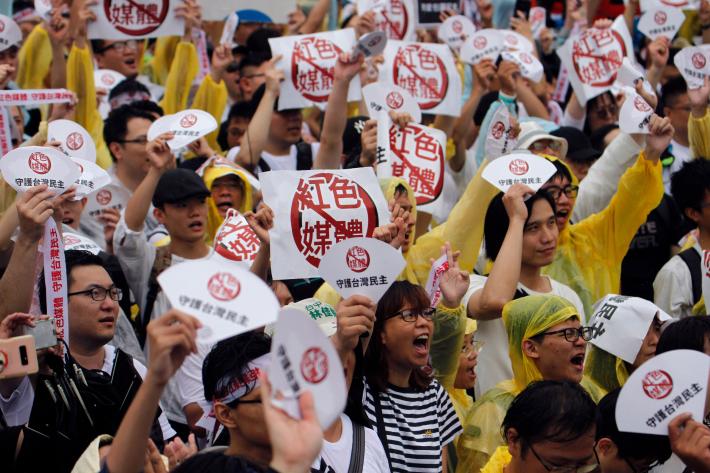 TAIPEI, TAIWAN – June 23, 2019: Protesters hold placards with messages that read “reject red
media” and “safeguard the nation’s democracy” during a rally against pro-China media in front of the Presidential Office building in Taipei. Photo credit: HSU TSUNHSU/AFP via Getty Images.

In the United Kingdom, editors received long, angry phone calls from the Chinese embassy after they published stories that were unfavorable to Beijing. In Kenya, Chinese diplomats distributed benefits including smartphones, holiday shopping vouchers, and paid trips in exchange for positive coverage of major events. And in Taiwan, Chinese state-linked entities offered trainings to social media influencers on how to expand their audiences and create polished videos.

These are among the varied tactics that the Chinese Communist Party (CCP) and its proxies have used to spread propaganda narratives abroad and suppress dissenting voices. A new Freedom House report released today, Beijing’s Global Media Influence: Authoritarian Expansion and the Power of Democratic Resilience, documents and analyzes the CCP’s media influence efforts in 30 countries that are designated as Free or Partly Free by the annual Freedom in the World report, including examples from the Americas, Europe, Africa, the Middle East, and Asia.

We found that between January 2019 and December 2021, the CCP’s efforts to shape media content intensified, and its tactics became more sophisticated, covert, and coercive. In 16 of the 30 countries studied, the intensity of CCP influence efforts was assessed as High or Very High; the efforts were Notable in 10 countries, and only 4 countries faced a Low level of influence efforts.

These campaigns go far beyond simple propaganda. They include disinformation, censorship and intimidation of local journalists, control over content-distribution infrastructure, trainings for media workers and officials, and co-optation of media serving local Chinese diaspora populations. Through these tactics, the CCP seeks to promote preferred narratives about China, its regime, or its foreign policy priorities—and to marginalize, discredit, or suppress news, political commentary, or investigative journalism that presents the Chinese government and its leaders in a negative light.

Meddling and resistance in the United States

The United States is an interesting example. We assessed the intensity of CCP media influence efforts in the US as the second highest in the study, lower only than in Taiwan, and encompassing a broad range of tactics. These included millions of dollars’ worth of content placements in major media outlets across the country, subsidized press trips for reporters, coordinated disinformation and cyberbullying campaigns, widespread efforts to limit coverage of China and induce self-censorship, and the exercise of control over diaspora media, including through the censored Chinese messaging application WeChat.

Yet the United States also demonstrated resilience in the face of these influence efforts. Several major national outlets canceled content-placement relationships with Chinese state media during the study’s coverage period. Researchers and journalists documented the grim realities of the CCP’s rule in China and exposed China-linked social media manipulation campaigns targeting users in the United States. Policymakers in the executive branch and Congress brought scrutiny to foreign investment and improved interagency coordination related to foreign influence activities. And US-based social media platforms labeled Chinese state media accounts and uncovered networks of fake accounts that were boosting false information about COVID-19 or even attempting to stoke social divisions in the country.

Due to these signs of pushback, we designated the United States as Resilient overall. But that is not to say the country is without vulnerabilities. Extensive political polarization creates a fertile environment for disinformation campaigns that exploit social cleavages. The federal government’s response to foreign media influence remains incomplete, and national-level coordination mechanisms are still nascent, while state and local officials are even less equipped to fend off sophisticated influence efforts.

The United States was not alone in displaying vulnerabilities. Half of the countries in the study were found to be Vulnerable rather than Resilient. And even many Resilient countries exhibited weaknesses like low expertise on CCP influence or the absence of laws that could enhance transparency and competition in the media sector.

But some of the biggest risks came from actions by the countries’ own governments that eroded fundamental protections for press freedom and freedom of expression, or that exploited and misdirected fears of Chinese influence for short-term political gain. In 23 countries in the study, political leaders launched attacks on domestic media or used legitimate concerns about CCP influence to justify arbitrary restrictions, target critical outlets, or fuel xenophobic sentiment.

The events of the last several years have prompted hand-wringing in democratic states about the supposed power and efficiency of authoritarianism. The findings of this study offer reassurance that the core features of democracy—free expression, transparency, and accountability—provide a strong defense against authoritarian influence. Democracies are resilient when they embrace and protect independent journalism and civil society groups, and when their laws shed light on media ownership and the activities of foreign states. Ultimately, the protection and improvement of fundamental rights and democratic governance are powerful safeguards against a range of authoritarian threats, whether from the CCP or any other source.

Nate Schenkkan is the senior director for research and countering authoritarianism at Freedom House. Sarah Cook is Freedom House’s research director for China, Hong Kong, and Taiwan and co-author of the Beijing’s Global Media Influence report.