Rapid economic growth in both countries has come at the cost of basic labor rights. 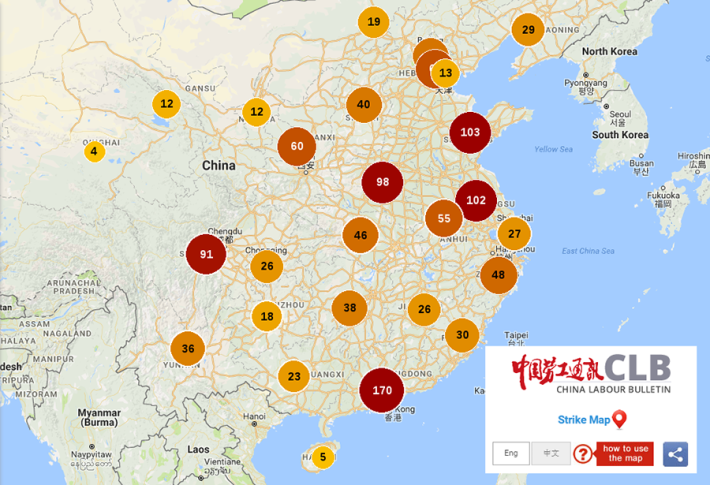 Click here to view the interactive map by the China Labour Bulletin that tracks and monitors labor strikes in China.

Rapid economic growth in both countries has come at the cost of basic labor rights, and the ride may soon be over without political liberalization.

The Chinese and Singaporean economies have long earned praise for their rapid and sustained growth. Singapore has been ranked as one of the top investment destinations in the world for the past 19 years, and has the fourth highest per-capita GDP in terms of Purchasing Power Parity (PPP). China’s economy is the largest in the world by PPP and the second largest by nominal GDP.

With the Asia-Pacific region currently delivering most of the world’s growth, observers in Asia and beyond are asking whether the Chinese and Singaporean models—which feature an authoritarian or quasi-authoritarian political system—are the most effective ways to pursue economic success in the 21st century.

The answer is no, for at least two important reasons: First, both China and Singapore have built their growth on a foundation of labor abuses that could not and should not be replicated elsewhere. Second, regional trends show that political liberalization promotes stronger economic growth than one-party rule, as noted on this blog last year.

Abuse of migrant workers in Singapore

Singapore’s economic development has relied heavily on foreign workers, who make up nearly 40 percent of the country’s total labor force. In December 2015, there were nearly 1.4 million foreign workers in Singapore, of whom 326,000 worked in construction and 231,500 were registered domestic (household) workers. Because these migrants lack the political rights, legal protections, and residency status of citizens, they frequently suffer from economic exploitation and other abuses.

Common infractions include late and improper payment, substandard accommodations, and illegal salary deductions. Employers often delay payments up to three months and use these back wages as leverage against workers who raise complaints or threaten to resign due to poor working conditions. Employers, moreover, pay little heed to regulations such as the Employment Act, which requires that employees work no more than 72 hours of overtime per month. Yet it is in large part these workers who are building Singapore’s world-renowned infrastructure and drawing increased investment to the island nation.

Between 2012 and 2014, the number of reported abuse cases involving household workers nearly doubled. Jolovan Wham, the executive director of a leading domestic worker shelter in Singapore, said last year that people “still think it’s okay to treat domestic workers as subservient.” Such workers are socially isolated, expected not to argue with employers, and seldom receive their contractual days off.

Singapore has grown quite wealthy with the help of migrant labor, but few other countries could hope to imitate it, particularly if they are populous developing nations that rely on a citizen workforce. Unlike noncitizens, citizens cannot simply be deported and replaced if they grow frustrated with their working conditions, creating the potential for instability.

The Chinese government has consistently emphasized economic development over human rights, especially labor rights. Despite President Xi Jinping’s aggressive if politically selective antigraft campaign and a promised reform of the hukou residency-permit system, labor rights violations continue on a wide scale across the country. As documented by China Labor Watch, these abuses include disregard of employment contracts, 15-hour shifts with only a single day off per month, mandatory overtime work, and lack of pre-work training on safety and machine operation. These and other infringements serve to maintain China’s role as a leading manufacturer in the face of rising competition from industrializing neighbors, such as Vietnam.

In response to their mistreatment, Chinese workers are organizing strikes and labor protests at an accelerating rate. The annual number of such incidents has soared from just 185 in 2011 to more than 2,700 in 2015, according to the China Labour Bulletin. However, these outbursts have often prompted further rights abuses through crackdowns by authorities and the firing, arrest, and harassment of labor activists. Authorities have gone so far as to dispatch police and dogs to factories to forcibly end protests and restart production.

The benefits of political liberalization

China’s leaders have long expressed deep interest in Singapore, which reached an advanced level of industrialization during the 20th century without substantial political liberalization. However, in seeking to learn from its example, the Chinese government has not fully recognized certain liberal characteristics embedded in the Singaporean regime.

While Singapore tightly restricts civil liberties like freedom of expression and freedom of assembly, it has an independent anticorruption commission and has built a reputation for relative probity. Moreover, its electoral system, which falls well short of liberal democracy, still provides far more political competition than China’s rigid Communist Party monopoly, and it is under growing public pressure to allow greater dissent, particularly online. Finally, Singapore’s government is somewhat more responsive to constituent demands and the opinion of the electorate than China’s. Since Xi rose to power in late 2012, his administration has taken repression of dissent and civil society to a whole new level.

Today’s Chinese leaders appear to believe that economic modernization can take place without political liberalization. But even Deng Xiaoping stated, “If we fail to do that [political reform], we shall be unable to preserve the gains we have made in the economic reform.” China is now experiencing an economic slowdown, and the painful structural changes needed to turn it around appear politically impossible given the leadership’s lack of electoral legitimacy and fear of dissent. Beijing should take steps toward political liberalization to solidify public support for the economic overhaul, for example by ending its crackdown on civil society and allowing fundamental labor rights to be consistently enforced by impartial courts.

Despite the seeming success of the Chinese and Singaporean models, each contains deep flaws. It is clear that they would be more humane, inclusive, and durable if their economic growth were supported by political liberalization.