China’s Latest Crackdown Is Not Its Worst

The crackdown on rights defenders pales in comparison to long-term oppression of religious and ethnic minorities. 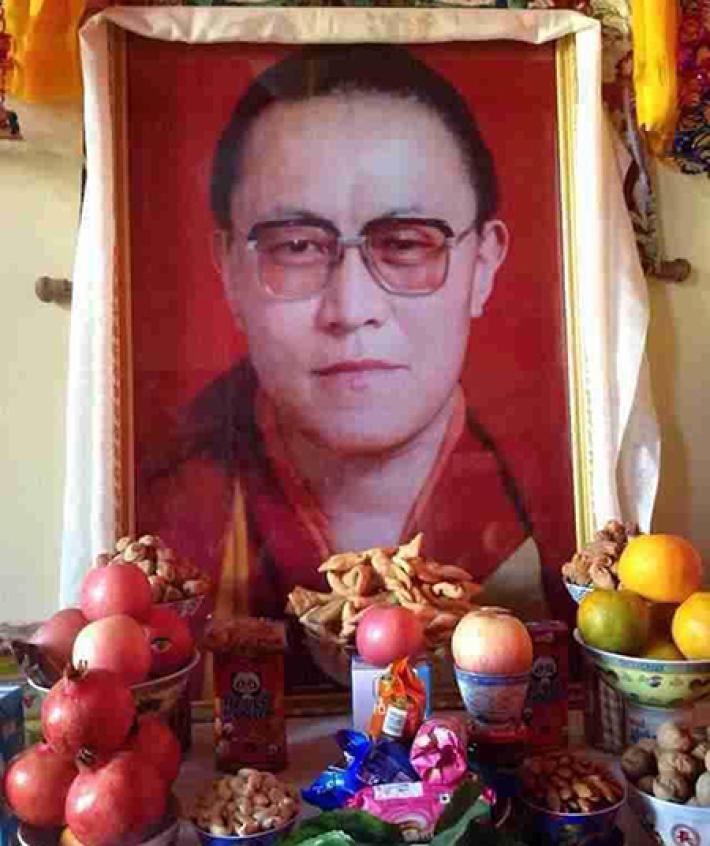 Display honoring the memory of Tibetan lama Tenzin Delek Rinpoche. The respected religious leader died in Chinese custody in July 2015 when serving a life sentence on trumped up charges, one of numerous Tibetans, Uighurs, Falun Gong practitioners, and Christians to have died due to official abuse over the past two years. Credit: France-Tibet.

This article was also published in The Diplomat on September 7, 2016.

For over a year, the Chinese government led by President Xi Jinping has pursued an aggressive campaign against human rights lawyers, their assistants, and the larger “rights defense movement” they represent. The effort came to a head last month with the conviction of four lawyers and activists after farcical trials, a new round of demonizing propaganda, and apparently coerced media interviews by two prominent female detainees. Some international news outlets, rights groups, and scholars have characterized the campaign as the “harshest crackdown on human rights and civil society in decades.” But, as dismaying as the assault is for these activists, their families, and the cause of free expression and rule of law in China, such labeling is inaccurate, or at the very least misleading.

The crackdown on legal activists is disturbing and highlights the expansion of repression to new targets under Xi, but focusing on the Communist party’s latest victims has the effect of erasing critical context. The scale and severity of this assault pales in comparison to the party’s campaigns of persecution against millions of religious believers and ethnic minorities over the past 20 years. To overlook this vast population of existing targets is to distort the nature of repression and dissent in China today. Ironically, such skewed analysis also risks inadvertently reinforcing the very censorship and impunity surrounding these groups that the human rights lawyers have sacrificed so much to combat.

Since July 2015, the starting point of the latest crackdown, over 300 lawyers and activists have been swept into police custody. Most were subsequently released following varying periods of detention, abuse, and interrogation. Disturbingly, 19 remained in custody a year later, including 15 who faced serious politically motivated charges of “subversion” or “inciting subversion.” It is in this context that prominent attorney Zhou Shifeng and activist Hu Shigen were sentenced to seven and seven and a half years in prison, respectively, in early August. The impact of their punishment reaches far beyond the legal community, generating negative ramifications for their clients and the broader cause of freedom in China.

Still, even 300-plus detentions pale in comparison to the number of people abducted and imprisoned in the CCP’s campaigns against Uighurs, Tibetans, Falun Gong practitioners, and Christians.

The scale of the repressive forces deployed against Falun Gong is itself mind-boggling. In 1999, when Jiang Zemin initiated the party’s project to eradicate the spiritual and meditation practice, its followers numbered at least 70 million, according to the government, international media, and the group’s own estimates. Since then, hundreds of thousands of people have been sent to labor camps, prisons, and extralegal detention centers for practicing Falun Gong or advocating on its behalf.

Even today, Falun Gong adherents make up a significant proportion of prisoners of conscience in China. Recent Freedom House analysis of Chinese court documents found over 800 cases of Falun Gong practitioners sentenced to prison since January 2014. In the first half of 2016 alone, 59 people around the country were sentenced for Falun Gong–related activities, according to available published verdicts. Notably, all of them were punished for exercising their right to free expression—for example, by disseminating leaflets or DVDs about Falun Gong, human rights abuses, or the CCP’s broader history of persecution against Chinese people—highlighting the close connection between religious persecution and restrictions on dissent.

In Tibet, after a series of predominantly peaceful antigovernment protests across the plateau in 2008, thousands of Tibetans—including many monks—were detained and over 100 were sentenced to prison. More recently, even in years without widespread unrest, large-scale arrests have continued to take place. A May 2016 Human Rights Watch report analyzed 479 cases of Tibetans detained between 2013 and 2015 for political offenses. The vast majority were taken into custody for peaceful acts of dissent, online or in the streets. One-third were subsequently prosecuted, with some sentenced to prison for up to 13 years.

In the case of Uighurs, precise statistics on suppression of clearly nonviolent dissent are harder to isolate. But given the Chinese government’s use of charges like “terrorism” or “separatism” in prominent cases involving peaceful critiques of government policies, it seems reasonable to conclude that many of the 592 Uighurs tried on security charges in 2013–14 (according to government sources cited by the Duihua Foundation) were not committing violent acts of terrorism. Moreover, some 12,000 trials were held in Xinjiang during those two years for individuals accused of social order offenses that are often used to punish individuals who disseminate banned information, participate in peaceful protests, or challenge government bans on religious observance. And at least some of the thousands of young men who were forcibly disappeared by security forces after interethnic riots broke out in Xinjiang in 2009 remain missing today.

Display honoring the memory of Tibetan lama Tenzin Delek Rinpoche. The respected religious leader died in Chinese custody in July 2015 when serving a life sentence on trumped up charges, one of numerous Tibetans, Uighurs, Falun Gong practitioners, and Christians to have died due to official abuse over the past two years. Credit: France-Tibet.

The detained lawyers have evidently suffered abuse in custody. It is otherwise difficult to explain the change in attitude toward their work after their arrest and in subsequent media interviews. Thankfully, however, no lawyer has yet died in custody or in the wake of such abuse.

By contrast, well-documented cases of religious or ethnic minority activists dying due to mistreatment in custody or the use of excessive force by security officers come to light each year. A prominent Tibetan lama died in prison under mysterious circumstances in July 2015. A 45-year-old Falun Gong practitioner was killed by police within 10 days of being detained in April 2016. That same month, the wife of a Christian pastor was buried alive by a bulldozer while trying to block the demolition of a church. These are only a few examples of the many deaths over the past two years.

One of the most striking and worrisome aspects of the crackdown on lawyers has been the extraordinary tactics employed to discredit them and pressure them to renounce their own activism: smear campaigns in state media, flashy infographics, framing as puppets of “hostile foreign forces,” forced confessions or denunciations in media interviews, and reprisals against targets’ families. The broad deployment of such tactics against human rights lawyers is certainly new. But their use by the Chinese government against perceived dissidents is not.

The launch of the anti–Falun Gong campaign in 1999 was accompanied by media blitzes demonizing the group, fabricated allegations against adherents and the discipline’s founder, televised show trials, and videos of detained practitioners renouncing their beliefs.

More recently, collective punishment tactics have appeared in Tibetan areas, with families or even whole villages facing economic reprisals when a self-immolation or an antigovernment protest occurs in their midst. The siblings and children of expatriate Uighur activists and journalists have been detained and imprisoned. And a common government narrative, particularly regarding Tibet and Xinjiang, blames overseas activists or religious leaders for inciting unrest within China’s borders.

The Chinese government’s latest crackdown on human rights lawyers, journalists, and civil society leaders is heartrending, troubling, and one of the most important developments in Chinese politics over the past year. But placing it in the proper context of the party’s overall assault on a wide range of dissent—including the religious variety—is critical if the world is to make sense of what is happening in China and avoid playing into the CCP’s divide-and-conquer strategy.

Having courageously represented victims of religious persecution, the detained lawyers understand better than anyone the horrors these communities have suffered and their significance for Chinese society. The causes and consequences of the attorneys’ own treatment cannot be fully appreciated without a clear understanding of the abuses they are being jailed for resisting. And such campaigns cannot be stopped without international recognition of the diverse segments of civil society who are sacrificing to make China a freer and more just country for future generations.

Sarah Cook is a senior research analyst for East Asia at Freedom House, director of its China Media Bulletin, and author of an upcoming report on religious persecution and dissent in China.