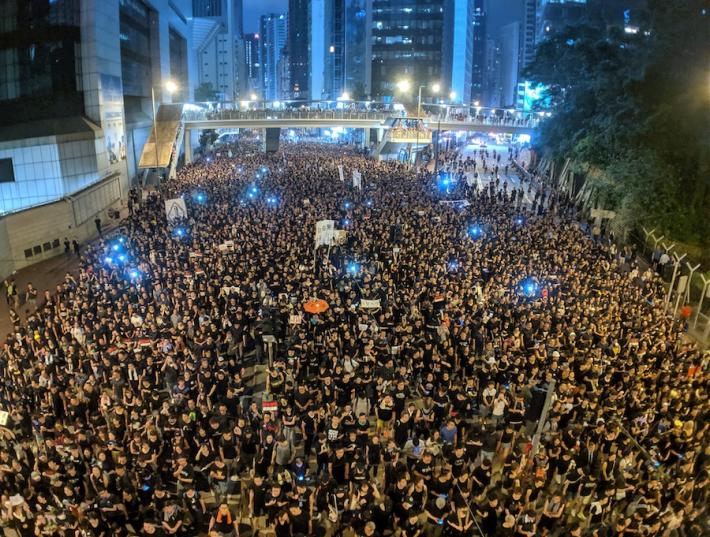 Every year in June, China’s censors go into overdrive to prevent citizens from discussing, commemorating, or learning about the prodemocracy protests that took place across the country in 1989 and the brutal military action that brought them to an end.

But this year, the combination of the 30th anniversary of those events, an escalating trade war with the United States, massive antigovernment protests in Hong Kong, and the availability of a more technologically advanced information-control system has driven the Chinese Communist Party’s censorship efforts to unprecedented extremes. With even more sensitive anniversaries approaching in July, the escalation is likely to continue.

Not surprisingly, the national internet filtering system known as the Great Firewall expanded its reach this month. Within the first week of June, the websites of 12 major international news outlets from five different countries were blocked, including CNN, the Washington Post, the Guardian, the Intercept, the Toronto Star, The Age in Australia, and New Zealand’s Newsroom. These joined others like the New York Times, Reuters, and the Wall Street Journal, which have long been inaccessible within China.

Meanwhile, the country’s most popular social media applications—Sina Weibo and Tencent’s WeChat—deployed novel technologies and penalties to prevent information about the June 4 anniversary of the Tiananmen Square massacre from circulating. Censors at top Chinese tech companies told Reuters that the artificial intelligence used to detect and delete banned content had reached “unprecedented levels of accuracy.” Those caught communicating about the events of 1989 risked being shut out of their WeChat accounts; to log back in, they would have to acknowledge that they had “spread malicious rumors” and provide a face print, as BBC journalist Stephen McDonell experienced first-hand. Manya Koetse notes that on Weibo there was more airtight censorship this year surrounding the word “Tiananmen” itself, and not only in combination with dates or terms that would link it to 1989. In another first, Apple reportedly removed several Chinese-language podcasts from its online store in China, affecting one of the few Apple services in the country that had until then avoided censorship.

Even somewhat dated entertainment content has not escaped the censors’ attention. In the most prominent example, major Chinese streaming platforms have removed music by rock star Li Zhi since April, and the musician’s Weibo account, WeChat public account, and Douban musician page have been deleted. Although Li’s recent music has been apolitical or even progovernment, a few older pieces alluded to the 1989 protests. In the run-up to the June anniversary, regulators ordered the deletion of any audio or video content related to these songs.

A more unexpected move has been the full or partial suspension of live-streaming, dating, and celebrity gossip services due to “system upgrades” or “maintenance,” all commencing in May and scheduled to end in June. At least nine such cases were documented, including Momo (a hook-up and live streaming app with 113 million users), video-sharing site Bilibili (100 million users), China’s largest dating app Tantan (90 million users), LGBT social media app Blued (27 million users), and Dingtalk, a business communication app. In most instances the service was not entirely shuttered, with suspensions focusing instead on features that enable real-time communication and might be difficult for censors to keep up with—such as “bullet chat” commentary that runs along a video. YY, a popular live-streaming platform, announced this type of restriction in late May, shortly after adding over 300 new keywords related to June 4 and Hong Kong to its blacklist.

The companies’ statements explained that their efforts were initiated at the behest of “the relevant government authority,” an apparent reference to the powerful Cyber Administration of China (CAC). They had little choice but to comply with the agency’s demands. The financial news service Refinitiv, which distributes Reuters content via Eikon terminals, was reportedly warned by CAC officials that it could lose its news dissemination license if it refused to omit articles related to the Tiananmen anniversary. In a sign of the regime’s broader anxiety about the economy and associated topics, on June 10 the CAC reportedly ordered the suspension of the website and mobile app of Wallstreet.cn, a financial news aggregator that had garnered an estimated 180 million global users.

In fact, the jump in censorship over the past month is perhaps most remarkable for the sheer scale of the media types and user bases affected. Hundreds of millions of people have experienced a sudden decline in their ability to access or share information, even if in some cases they remain unaware of the reasons behind the restriction.

Given that the upgraded censorship seems to have been triggered largely by the Tiananmen anniversary, one might assume that most of the new measures are temporary. But the evidence suggests that such an assumption would be a mistake.

Freedom House’s tests of the 12 foreign news sites that were blocked in early June—conducted on GreatFire.org’s URL analyzer—show that apart from CNN, all remained blocked as of June 18. Other innovations deployed over the past month, such as social media filtering aided by artificial intelligence, can be expected to expand rather than contract in the coming years. Any information about problematic WeChat users that was collected during this sensitive period will be retained for future reference.

And if China’s censors were busy in June, the month of July will be no picnic either. July 1 marks the anniversary of Hong Kong’s transfer from British to Chinese rule, which could easily prompt another round of mass protests. Then there is July 5, the 10th anniversary of ethnic violence in the Xinjiang region that led to a harsh and ongoing crackdown on its large Muslim population. The very next day, July 6, is the Dalai Lama’s birthday, and July 13 is the second anniversary of the death of democracy advocate and Nobel Peace Prize laureate Liu Xiaobo. Finally there is July 20, the 20th anniversary of the Communist Party’s ban on the Falun Gong spiritual practice and the beginning of a massive and often violent campaign to eradicate it.

Unlike the more historically focused June 4 anniversary, some of July’s sensitive dates are closely tied to current events, including the most egregious human rights abuses and most important examples of dissent taking place in China today. Over the last week alone, news emerged that a prominent Uighur writer had died due to detention in a Xinjiang “reeducation” camp, an independent inquiry in London concluded that prisoners of conscience in China—including Falun Gong and potentially Uighur detainees—have been killed so that their organs can be used in transplant operations, and the Hong Kong government suspended its controversial extradition bill after mass protests.

Most people in China may be completely unaware of these developments, even though they are making international headlines and could have real repercussions for the country. Despite this information isolation, however, hope is not lost. Numerous accounts published this month by young Chinese explain how they learned the truth about the events of 1989 and highlight some of the cracks in the regime’s censorship system. Data from at least two circumvention tools show an increase in users from China in June compared with the previous month, around both the June 4 anniversary and the large protests in Hong Kong.

People in China clearly want to know what the government is not telling them. As the coming month propels Beijing’s information control efforts to even greater extremes, international actors should be prepared to support ordinary individuals’ quest for access to uncensored news.

Sarah Cook is a senior research analyst for East Asia at Freedom House, director of its China Media Bulletin. This article was also published in the Diplomat on June 24, 2019.