Ethiopia’s emergency declaration could give carte blanche to the government to restrict freedoms in the name of battling coronavirus. Meanwhile, a legitimacy crisis looms, as elections are postponed due to dangers posed by the virus. 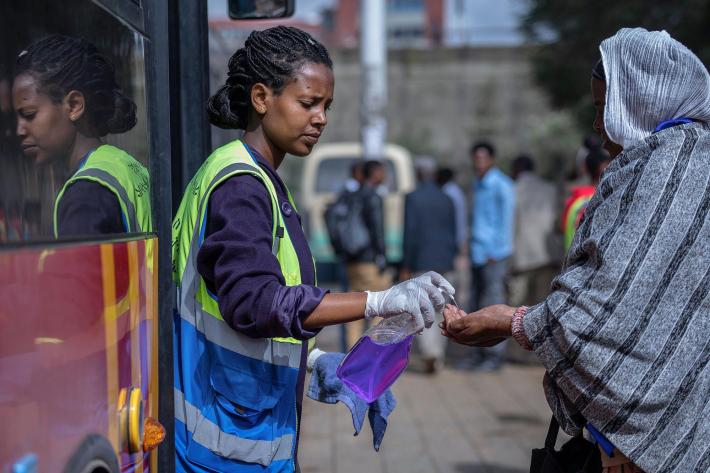 A volunteer provides hand sanitizer to passengers entering a bus as a precaution against the spread of the new coronavirus in Addis Abba. Editorial credit: Mulugeta Ayene/​AP/​Shutterstock.

On April 8, Ethiopia’s Council of Ministers declared a national state of emergency in response to the COVID-19 pandemic. The decree came days after the postponement of the August elections over virus-related concerns, and in the wake of separate public safety measures issued as evidence of the virus mounted, including limits on public gatherings, school closures, and orders for some government employees to work from home. Authorities have yet to fully explain how the emergency decree’s provisions will affect Ethiopians, and there is reason for concern that it could lead to a worrying escalation of restrictions the federal government has implemented since the country confirmed its first case of COVID-19 on March 13. As of Sunday, government reports indicate that about 3,863 tests have found 71 people infected with the coronavirus, with three deaths documented to date.

While details of the emergency declaration were not released at first, an Amharic-language text published Saturday lists restrictions including limiting public gatherings to four people and suspending the right of suspects to appear before a judge within 48 hours of arrest, and gives the government powers to order companies to manufacture, expand, and alter their products and services in order to fight COVID-19. The five-month emergency decree went into effect on Friday following its approval by parliament, in a session that unusually took place outside the main hall in order to avoid congestion.

During the session, lawmakers did not deliberate details of the restrictions. Rather, they adopted a proclamation entrusting the Council of Ministers with the power to issue regulations as needed in response to the pandemic. Ethiopia’s constitution required the emergency declaration to be presented to parliament within 48 hours of its announcement and to be approved by a two-thirds majority vote; in Ethiopia’s single-party-controlled Parliament, getting the two-thirds majority apparently seemed easier than figuring out the logistics of how the 547-member body could deliberate specifics of the decree while complying with social-distancing guidelines.

What has been revealed about the emergency decree is alarming. An “explanation” of the decree published Wednesday by the Office of the Attorney General (OAG) and reiterated in a televised address by Attorney General Adanech Abebie on Saturday indicates that the government’s approach to declaring an emergency places more emphasis on ensuring that the executive branch has sweeping powers it can utilize in a flexible manner, than on using the declaration to impose a one-time, fixed set of restrictions on human rights and fundamental freedoms. This approach, the OAG says, will allow the government to formulate a series of flexible and context-specific measures that better respond to the magnitude and evolving nature of the pandemic.

The merits of a flexible approach to the limits the government can place on fundamental rights and liberties are understandable. However, the dangers of affording the government such limitless powers to impose restrictions with little to no oversight cannot be overstated. Previous states of emergency in 2016 and 2018 were routinely abused by Ethiopian authorities, and resulted in mass arrests, widespread torture, and the closure of critical media and electronic communications.

The complexity of responses that the COVID-19 threat necessitates should not outweigh the imperative to explicitly outline the extent of restrictions on human rights, and the safeguards and remedies available to citizens to protect their rights and address violations. The OAG’s assertion that international principles of “necessity” and “proportionality” will be taken into consideration to check the emergency powers the decree gives to the Council of Ministers cannot be taken as a sufficient guarantee that these powers will not be abused.

The State of Emergency Inquiry Board set up by parliament Friday, as required by the constitution, should be given the independence and resources necessary to carry out its oversight responsibilities. Parliament should ask the government to present an expanded text of the decree with explicit language on the scope of the limits on human rights and the accountability mechanisms for abuse of emergency powers.

While the country faces many challenges, the dramatic political reforms that have taken place since the beginning of 2018 have sparked hopes that the country can bring about an end to decades of authoritarian rule. However, the response to COVID-19, in addition to raising concerns about overreach under the vague new state of emergency, also brings forward troubling questions about how the legitimacy of the government can be maintained in the absence of planned elections.

On March 31, the National Electoral Board of Ethiopia (NEBE) announced that due to the virus, it was terminating the electoral calendar published in February—which had set national elections for August—and was suspending all election-related operations. The announcement generated widespread speculation as to what it would mean for Ethiopia’s fraught efforts to move away from decades of authoritarian rule and build a democratic system of government. In particular, many are wondering how the government will address the legitimacy crisis postponing the elections could create, given the expiring mandate of the current parliament.

If the elections are not held by September and a new parliament is not constituted by October, there will not be a legitimate government. This vacuum can endanger Ethiopia’s political transition by lending weight to claims by those who have been calling for the formation of a transitional national unity government drawn from the ruling and opposition parties since Abiy Ahmed’s appointment as prime minister in April 2018. Given the polarization of views on every major issue among the country’s political forces, this scenario could easily be a prelude to a prolonged crisis of governance.

Since the announcement of the elections’ postponement, leaders of opposition parties are saying that they should be consulted about any decision that will determine the fate of the current parliament, as well as governmental structures set up until elections can take place. It is crucial that the government come up with a legal way out of this conundrum, and it is equally important that the solution be acceptable to at least the major political groups in the country.

While the constitution grants the prime minister the power to dissolve parliament, with the consent of the parliament itself before the expiry date of its mandate, dissolving parliament should be followed by fresh elections within six months. This does not seem to be an option if the COVID-19 threat persists. The prime minister’s power to govern comes from his party having the majority of seats in parliament, so dissolving the current parliament without an election will not necessarily ensure that his government will stay in power. In fact, the general rule under the constitution is that the term of the prime minister is equal to the term of the parliament. A decision to dissolve parliament may open the door for the president to invite all parties in parliament to form a coalition government, even as this remains a very uncertain path.

This is uncharted waters for Ethiopian politics. Whether the way out is to extend the mandate of the current parliament beyond September by invoking the COVID-19 threat as an emergency that justifies such a move, or to issue a decree to allow the ruling party to continue carrying out the functions of government until elections are conducted, it is likely that some in the opposition will be vigorously opposed. The result of this contestation may be a political stalemate that undercuts the government’s ability to rally the nation in the fight against the COVID-19 pandemic, and derails Abiy’s still problematic, yet promising political reforms.