A human rights–based approach to public health emergencies would help fight the spread of disinformation, provide people with the tools to keep safe, and reduce the need for security measures when a crisis emerges. 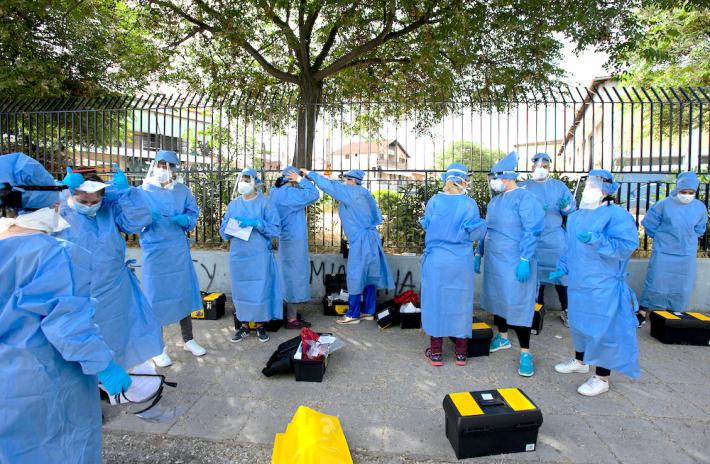 Since the early 2000s, political analysts and scholars have feared potential human rights abuses that could emerge due to an international trend of securitization of public health crises—an approach that confronts emergencies such as a pandemic as a national security threat. These fears have been realized during the COVID-19 pandemic, as a startling variety of governments have leaned heavily on repressive responses to enforce measures meant to slow the virus’s spread. The pandemic has also revealed what is lacking in public health systems internationally: an infrastructure built to prioritize human rights through resources that directly support people’s ability to stay safe.

The logic of securitization

Language describing the coronavirus as a security threat has circulated widely among world leaders, major news publications, and international bodies including NATO and the WHO. This continues the pattern of securitized responses to public health crises seen during the H1N1 outbreak in 2009, the Ebola crisis in 2014, and the Zika virus in 2015.

The logic of securitization in response to the COVID-19 pandemic is also clear in government actions around the world. In countries that already employed repressive tools to control their populations, regimes have used COVID-19 as a pretext to fortify surveillance and policing infrastructure. China, Kyrgyzstan, and Kazakhstan have created COVID-19 contact-tracing apps that have varying surveillance capabilities, including the ability to track movements and listen in on phone conversations. The Russian, Kazakh, Chinese, and Uzbek governments have used street cameras and facial-recognition technology to track individuals who may have violated quarantine or come into contact with someone who contracted coronavirus. These countries and others have also sought to suppress information about the crisis and have concealed the scale of the outbreak within their borders. States across the globe, at the same time, have introduced new and harsher penalties for the spread of allegedly false information, taking advantage of the public health crisis to intimidate and silence government critics.

In some countries, police have responded to violations of anticontagion measures with lethal violence. In Kenya, the police have killed at least 15 people—including a 13-year-old boy standing on the balcony of his family’s home—to enforce the dawn-to-dusk curfew instituted at the beginning of the outbreak. The invocation of the Public Order Act in response to COVID-19 has led Kenyan police forces to employ “nearly unchecked police brutality,” according to Nairobi-based political analyst Nanjala Nyabola, and has also stigmatized those who test positive for COVID-19. In Honduras, police have detained, beaten, shocked with electric prods, and in some instances killed people who broke lockdown laws. Reports of mass, unjust detentions have emerged from the Philippines, Bangladesh, and Pakistan, among other states.

In Europe, the securitization approach to the crisis has exacerbated already-unequal treatment of marginalized groups. Across Europe, ethnic Roma, people without stable housing, and members of other marginalized groups have been disproportionately impacted by lockdown rules, are more frequently detained, and receive inadequate medical and economic support. In a recent report, Amnesty International documented many cases where police used unlawful force in implementing lockdown measures and restrictions.

Meanwhile, in France and Spain, police have used drones to surveil the population and enforce quarantine measures, although a French court eventually banned the use of drones for the infringement of privacy rights.

In the United States, implementation of coronavirus lockdown rules has also been uneven, with reports of racial discrimination in enforcement of quarantine measures in cities across the country. Additionally, some police officers have eschewed masks and ignored social distancing and other health and safety rules that they are tasked with enforcing. On the other hand, some police departments have declined to enforce lockdown rules at all. Other cities have used drones to record body temperatures of citizens in public spaces, despite pushback from civil liberties groups.

Around the world, human rights groups and other institutions have noted a rise in racially motivated discrimination and attacks because of COVID-19, particularly, but not exclusively, against people of Asian descent. International observers have also noted a rise in xenophobic, white supremacist, ultranationalist, antisemitic, and anti-immigrant hate speech and conspiracy theories amid the pandemic.

The COVID-19 crisis has shown that securitized approaches to a pandemic do not adequately protect human rights during a global health emergency. Measures like stay-at-home orders are not inherently unlawful—human rights standards permit necessary and proportionate actions to protect public health. But it is cause for concern when anticontagion measures are viewed primarily through the lens of a security response that shifts attention and public resources toward responses that rely on policing and surveillance, and away from the support systems and medical infrastructure needed to uphold the right to life and health.

Public health crises should first and foremost be addressed through an approach that focuses on human rights, instead of security, with resources and decisions directed to support people who face economic, social, and psychological difficulties as a result of the virus. Public health education before a global health emergency would help fight the spread of disinformation and provide the public with the tools to keep safe. Economic, medical, and psychological support and services can enable individuals to follow rules safely. With better infrastructure and a better-prepared populace, there would be less need for security measures when a public health emergency occurs.

Policy changes that emphasize a proactive approach to human rights, to be effective, must be part of a larger transformation away from a securitized approach to public health. Public preparation, prevention methods, and support needs to be in place, now, and after the end of the coronavirus crisis.

Securing a Vibrant Future for the World’s Public Broadcasters