Crimes against Journalists Are on the Rise and Are Seldom Punished

Members of the press risk their freedom and their lives in pursuit of the truth while their attackers, ranging from criminals to political leaders, target them with impunity. Protecting the press and respecting the valuable role it plays should be higher priorities.

Director of the Political Prisoners Initiative 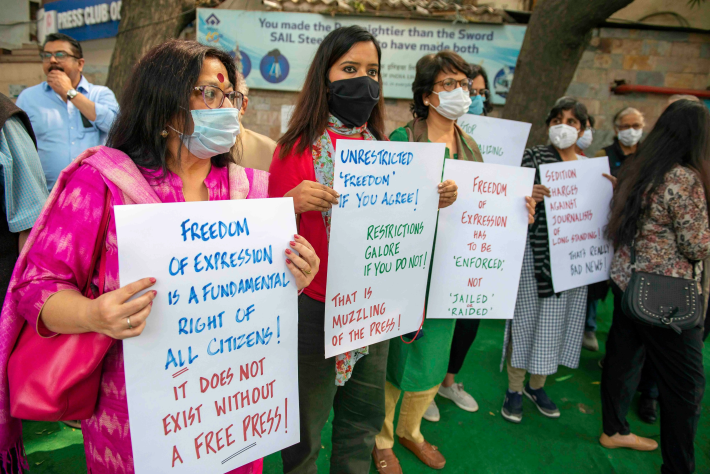 On November 2, the United Nations observed its ninth annual International Day to End Impunity for Crimes against Journalists. The United Nations established this day in no small part because of the essential role journalists play in healthy and vibrant democracies. Independent reporters hold the powerful accountable for their conduct, their policies, and the results, and help their fellow citizens make informed choices that are untainted by propaganda or misinformation. When reporters are silenced, people are robbed of the information they need to make decisions that affect their lives.

This commemoration is also necessary because journalism is as dangerous as it is important. Authoritarian and illiberal governments frequently target journalists and media workers with the ultimate goal of silencing them. As these hostile rulers seek to quell dissent, the work of journalists is growing increasingly treacherous. Journalists are being harassed, assaulted, jailed, and killed in record numbers for reporting on the activities of their governments, issues of major public concern, and information ordinary people may not otherwise be able to access.

This goes unchallenged far too often, emboldening perpetrators to continue their attacks and employ increasingly brutal tactics. One of the most infamous, and heinous, examples is the 2018 murder of Jamal Khashoggi. Khashoggi, who visited the Saudi consulate in Istanbul for paperwork confirming his divorce, was apprehended by a team of Saudi operatives, murdered, and dismembered.

His case shocked the world, not least because it was allegedly authorized by Crown Prince Mohammed bin Salman himself. But violent consequences are sadly routine for those who dare to pursue this profession, especially under repressive regimes. The Committee to Protect Journalists (CPJ), which reports on attacks against journalists and media workers around the world, says that more than 2,000 journalists have been killed worldwide since 1992 and 69 have gone missing.

Everywhere is dangerous all the time

Journalists face obvious dangers when operating in areas riven by conflict and insecurity, like Ukraine; the CPJ counts at least 12 journalists who were killed for reporting on the Russian regime’s ongoing war there. Some 13 journalists have been killed so far this year in Mexico, the deadliest country for journalists in the Western Hemisphere.

But the truth behind journalists’ deaths is often challenged or dismissed by local actors. Shireen Abu Akleh, a Palestinian American correspondent for Al Jazeera, was shot and killed in May while covering an Israeli army maneuver in the West Bank. As her family seeks accountability, investigations by multiple US news outlets have found that Abu Akleh was likely killed by an Israeli soldier. While Israel maintains she was caught in the crossfire between Israeli soldiers and Palestinian fighters, Palestinian witnesses assert no gunfire was exchanged near Abu Akleh.

In June, British freelance journalist Dominic “Dom” Phillips and Bruno Araújo Pereira, a Brazilian environmental activist who was documenting the exploitation of the Amazon rainforest, went missing in Brazil’s Amazonas State, in an area deeply affected by criminal activity. Local police concluded that Phillips and Pereira were killed the very day they went missing; their bodies were discovered later that month. While police and military personnel mounted a search, the authorities were nevertheless criticized for a tardy response. Brazilian president Jair Bolsonaro was notably dismissive when addressing their disappearance, saying “anything can happen” when engaging in “adventure.”

While Abu Akleh, Phillips, and Pereira were killed in areas known to be dangerous, journalists also die in circumstances that are not inevitably so. On October 4, a news-radio host in the Philippines, Percival Mabasa, became the second journalist to be killed in the five months since President Ferdinand Marcos Jr. took power after a divisive election. Mabasa, who was gunned down on the way to work, openly criticized Marcos and his predecessor, Rodrigo Duterte. Another Philippine radio personality, Rey Blanco, was stabbed to death a month prior.

Journalists who flee their countries are not safe, either; on October 24, Pakistani journalist Arshad Sharif, who left for Kenya fearing for his life, was killed by Kenyan police in unclear circumstances.

While the United States may be considered a relatively safe place for journalists, it is not immune from such violence. Jeff German, a Las Vegas Review-Journal reporter covering politics and corruption, was found stabbed to death near his home on September 2. A local government official who was the subject of recent reporting by German was arrested and charged with murdering him days later. German was the 15th journalist to have been killed in the United States since 1992; some have died in particularly infamous incidents, like the four who were killed in a mass shooting at the Capital Gazette in Annapolis, Maryland, in 2018.

These murders are brazen and appalling. So is the fact that for every 10 murders of journalists, only 1 will end with a successful prosecution of the offender. Most perpetrators will go unpunished, as will the authoritarian regimes who imprison journalists for reporting “antistate” stories or for “religious insults” and other trumped-up claims.

According to Reporters Without Borders (RSF), 524 journalists and media workers were in detention around the world as of last week. Regimes in China, Myanmar, Turkey, Egypt, Iran, and Belarus detain the most journalists, but the use of arbitrary detention is also popular in places like Russia, Saudi Arabia, Morocco, Vietnam, and Afghanistan.

These jailed journalists, who receive draconian sentences for their alleged offenses, face brutal conditions. They are kept in solitary confinement, are sometimes beaten or tortured, and will often be denied visits from relatives or attorneys. Some will die in prison for having had the audacity to disagree with their government.

It takes an incredible amount of courage to be a journalist today. For those living under regimes that do not respect freedoms of the press or open expression, being a journalist means putting one’s life at risk. Journalists challenge the powerful so that their fellow citizens can learn about issues and stories others would prefer hidden. We should all remember this the next time they are maligned as “enemies of the people.”