Last week, Freedom at Issue published a chart (left) that showed a powerful link between terrorist attacks and countries that lack democratic governance. As the second graphic (right)  indicates, the correlation is even stronger when the number of deaths is taken into account. 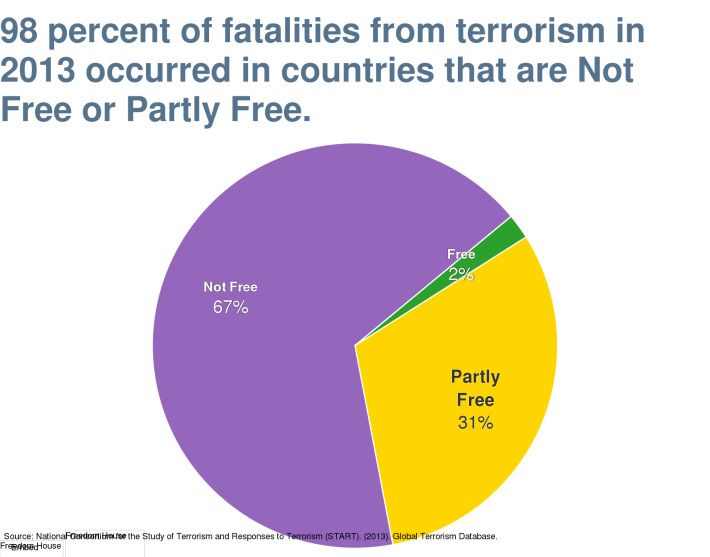 Last week, Freedom at Issue published a chart (left) that showed a powerful link between terrorist attacks and countries that lack democratic governance. As the second graphic (right)  indicates, the correlation is even stronger when the number of deaths is taken into account: Just 2 percent of deaths from terrorist attacks in 2013 occurred in countries that were ranked Free in Freedom in the World. 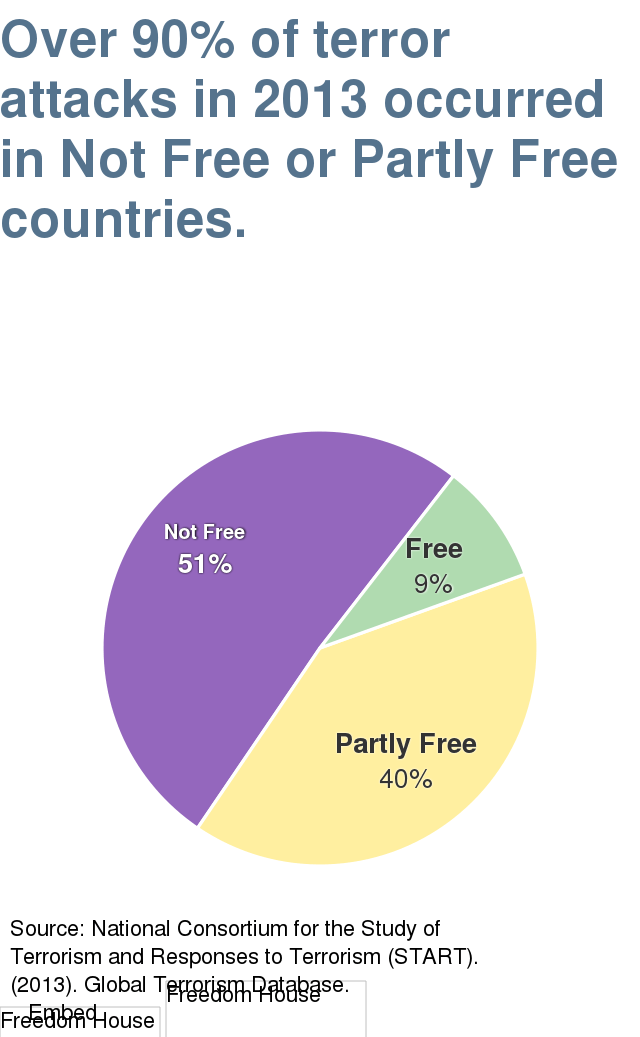 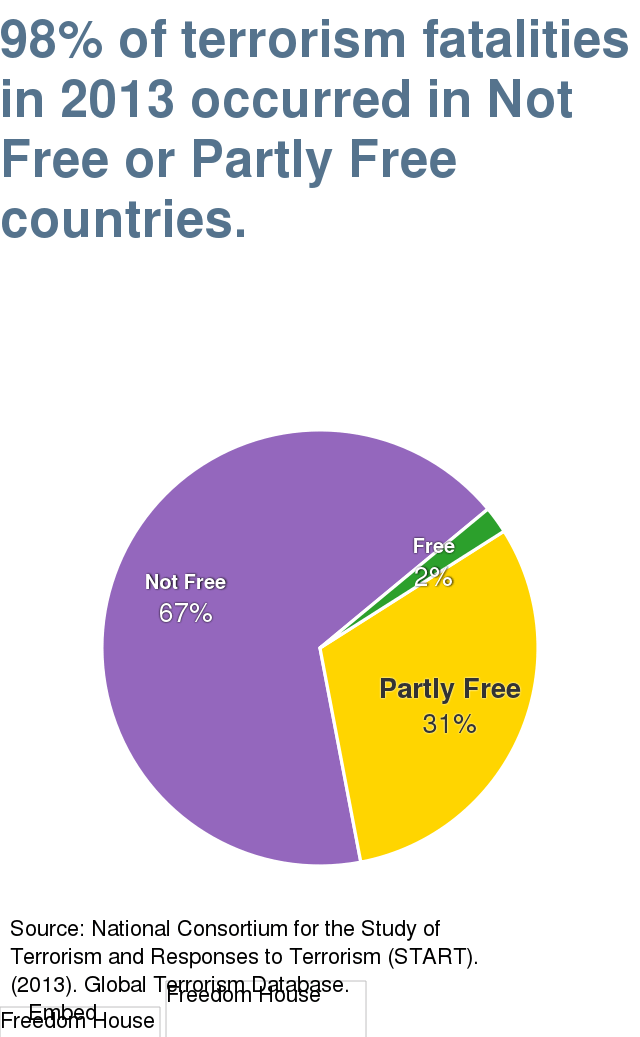 The data for both charts are drawn from the authoritative project START, the National Consortium for the Study of Terrorism and Responses to Terrorism, based at the University of Maryland. The consortium offers statistics on the number of terrorist attacks per country as well as the number of fatalities from such attacks. We broke these figures down according to Freedom in the World designations to determine the percentage of attacks and deaths in Free, Partly Free, and Not Free countries. The results strengthen the argument that while terrorism poses a threat to democratic and nondemocratic societies alike, it is apparently able to flourish only in dictatorships, states with authoritarian-leaning regimes, and settings that suffer from weak or corrupt government.

To take note of this is not in any way to minimize the tragedy, or the importance, of the Charlie Hebdo massacre. Indeed, the killings in France are shocking precisely because terrorist incidents of this magnitude are so unusual in democracies. Furthermore, the murder of the cartoonists and editors was meant to send a message to the whole world: Cross certain red lines, and the same thing can happen to you.

But the Paris killings took place in a global environment in which horrible massacres unfold on an almost daily basis. Late last week, nearly 20 people were killed in a bombing in Yemen. Mass killings in northern Nigeria are by now practically commonplace; some estimates put the death toll from the latest spate of Boko Haram attacks at 2,000, with girls as young as 10 being forced to serve as suicide bombers. There are also chilling reports of Islamic State loyalists kidnapping Christians in Egypt. In Pakistan, a school has just reopened several weeks after nearly 150 children were gunned down by terrorists.

As last week’s blog put it:

“For evidence that authoritarian states create an enabling environment for terrorism, one has only to look at the location and origins of the major terrorist groups active today. The Islamic State, for example, metastasized amid the Syrian dictatorship’s war with opposition rebels and the sectarian divisions sown by increasingly authoritarian Iraqi prime minister Nouri al-Maliki. An affiliate of the group has emerged in Egypt, where coup leader Abdel Fattah el-Sisi is cracking down on all forms of dissent. And Boko Haram has radicalized and expanded its reach amid extrajudicial killings and other ineffective tactics by the corruption-plagued Nigerian security forces.

Given this reality, the most effective way for democracies to combat terrorism at home over the long term may be to foster democratic governance abroad.”