Vučić’s ruling SNS party didn't need dirty tricks to win Belgrade's elections — but, perhaps they thought it better to be safe than sorry. 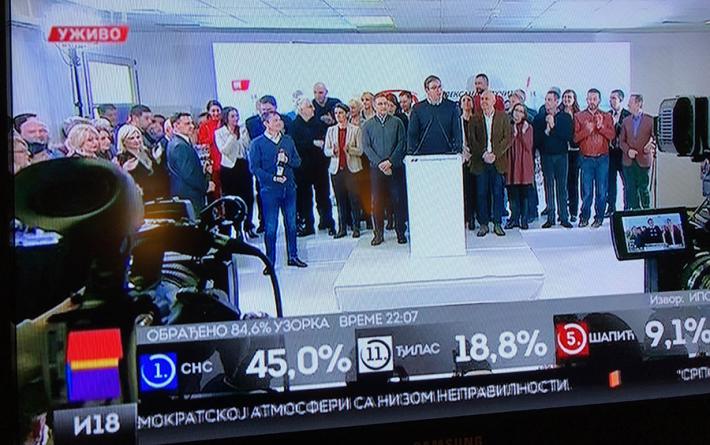 In the days before the local election in Belgrade, one could hear two, contradictory opinions. On one hand, some said President Aleksandar Vučić’s ruling Serbian Progressive Party (SNS) would win easily, given that the SNS party list was polling at above 40 percent. On the other, some argued that no one really knows what will happen—after all, one can’t trust the polls. In a sense, both were right.

The SNS party list—officially entitled “Aleksandar Vučić-Because We Love Belgrade”—won a sweeping victory on March 4, taking 45 percent of votes and winning enough to govern in the city council on its own, for the first time. Yet the election was characterized by numerous irregularities, raising doubts about the fairness of the process, if not the actual outcome.

In one instance documented by the daily Danas, polling station officers seemed to have a shadow list containing the names of voters the SNS allegedly pressured to vote for the party and to bring their families and friends to the polls to do likewise. Those on the list who failed to appear, presumably, could face reprisals. On another occasion, a friend of a journalist went to vote only to find that she had already done so, according to poll workers. Journalists also talked about the use of a so-called Bulgarian train, a form of vote-rigging in which operatives pay voters to accept a premarked ballot to cast at the polls; the voter then submits the premarked ballot and returns their blank one, which is marked for the preferred candidate and handed to the next person willing to sell their vote.

The issue of dead or phantom voters also continued to haunt the city. According to some estimates, the number of eligible voters stood at around 1.6 million, a figure that would suggest the meteoric growth (or rapid coming-of-voting-age) of a city 2011 census figures put at just under 1.7 million inhabitants. It felt as if suddenly everyone wanted to vote in Belgrade. Illustrative of this situation was that even Milorad Dodik, the president of neighboring Bosnia and Herzegovina’s Republika Srpska entity, turned up to vote.

The strange thing is that Vučić would not have needed this mobilization to win the elections. Already before the voting he had at least two factors working to his advantage. First, he has most of Serbia’s media under his control and had drowned out all other candidates with frequent appearances on television, as well as on billboards. And, he also happens to be the president, having switched over from the prime minister’s seat just a year ago, but keeping control of both offices through the appointment of a loyal ally to the latter. Being the most powerful man in the country, whose decisions influence everything from the city budget to construction, Belgrade voters perhaps thought it best to stay on his good side.

But it was not only the SNS’s dominance over the political and media sphere, and the influence of its ubiquitous leader, that catapulted the party to victory. When asked about opposition candidates in the Belgrade race, voters were far from enthusiastic. The candidacy of former Belgrade mayor Dragan Đilas—who finished second in the mayoral race with 19 percent of the vote—received a sigh and a shrug from one local journalist, who said, “Đilas? He was the one who came up with this idea of control over the media.” Aleksandar Šapić, current president of the New Belgrade municipality and former water polo star—who seemed like someone who could shake things up a bit—in the end took only 9 percent of the vote, finishing third; he was seen as outbidding the ruling party in populist promises, which apparently turned off many voters. The relatively new Enough is Enough, an economically liberal party promising to clean up politics, teamed up with the far-right Dveri, to the surprise of many. But both parties, as well as the youth initiative Let’s Not D(r)own Belgrade, failed to pass the 5 percent voting threshold. And similarly, for the first time in its history, the Democratic Party (DS)—the party of slain Serbian prime minister Zoran Đinđić—failed to win seats in the city council.

The ruling party, however, finished first despite the fact that its current mayor, Siniša Mali, has been embroiled in a series of scandals that dented his popularity. According to allegations, Mali was behind the 2016 demolition of an entire street in the popular Savamala district. The demolition, intended to clear the way for the lavish Belgrade Waterfront Project, took place with the help of masked men who appeared overnight and illegally detained people lingering in the area. Mali was also the target of an investigative article that appeared right before the elections, claiming that he has no fewer than 45 bank accounts under his name or control.

So unpopular was Mali, in fact, that the SNS decided not to campaign with him. The ruling party’s list featured two well-known and respected citizens in the first two places, a pediatrician and a ballet dancer. Stripping voters of the opportunity to put a face next to their vote, Vučić said after the election that the SNS will announce its mayor in 15 days. With this, the possibility of Mali keeping his post at the helm of Belgrade remains—he is third on the list and the two other are rumored to resign as soon as the real work begins.

In spite of the troubles surrounding its SNS-backed mayor, Belgrade was in festive mood ahead of the polls. Last year’s twinkling Christmas lights still decorated the city streets, as did a huge plastic Christmas tree allegedly installed at a cost to the city of €83,000—which would make it the most expensive in Europe. The tree and the decorations were both supplied by a company on friendly terms with Mali. With SNS’s victory, they might not go anywhere either.