Media polarization both reflects and exacerbates the country’s political and ethnic divides. 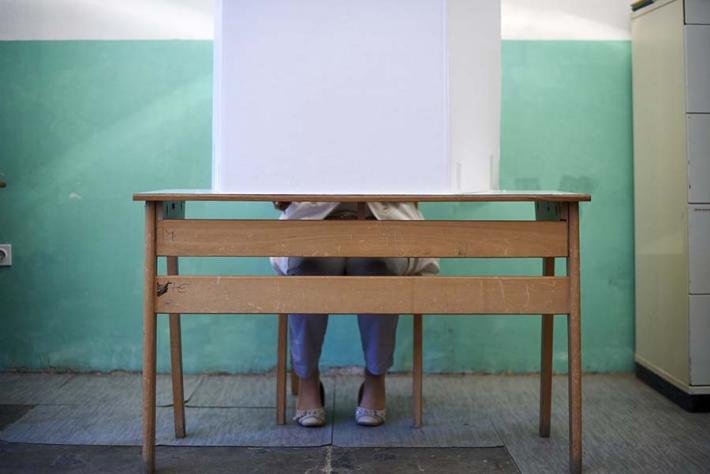 Media polarization both reflects and exacerbates the country’s political and ethnic divides.

Last week, Bosnian journalist Vladimir Kovačević was attacked and beaten with metal bars as he returned home from reporting on a demonstration that called for government accountability in Banja Luka, capital of the country’s ethnic Serb portion, Republika Srpska (RS). The assailants sped away in a car, and Kovačević was hospitalized. The assault, which sparked protests among journalists in Bosnia, was a sign of how precarious conditions are for the press in RS, and how heated Bosnia’s preelection atmosphere has become.

While Milorad Dodik, the increasingly authoritarian president of the RS, has condemned the attack and called on the police to bring the perpetrators to justice, he has long been openly hostile toward journalists and the media. Dodik has called BNTV, Kovačević’s employer, an “enemy” television station and a “factory of lies,” and accused critical journalists of working against the country’s interests. A few days before the recent assault, Dodik claimed that Dino Jahić, the editor in chief of the Center for Investigative Journalism of Serbia (CINS) and a Freedom House contributor, is attempting to “destroy regional political structures with money from international organizations.” The accusations—which, in keeping with regional conspiracy theories, included references to U.S.-based billionaire and philanthropist George Soros—came after Bosnia’s Center for Investigative Reporting (CIN) released a database of properties owned by the country’s politicians.

Dodik is apparently more nervous than usual about reporting that doesn’t portray him in a favorable light—most likely because his Alliance of Independent Social Democrats (SNSD) is facing a strong opposition challenge in the elections set for early October.

While Bosnia’s journalists work in a relatively safe environment compared with other countries in the region, such as Serbia or Montenegro, conditions for the press in both parts of Bosnia—the RS and the Federation of Bosnia and Herzegovina—remain difficult. The country’s score for independent media is stuck at a low level in Freedom House’s annual Nations in Transit report. According to a 2017 report from Bosnia’s ombudsman, journalists work without adequate employment agreements and often encounter threats and attacks; between 2012 and 2017, a total of 266 attacks were documented.

The Bosnian media market is also oversaturated. According to the latest data from IREX, there are 9 daily papers, 189 other periodicals, 141 radio stations, and 41 television stations serving a country of just 3.5 million people. Yet despite the plethora of choices, these outlets are divided along ethnic lines, and information is often distorted to serve political interests, with little effort to address the common public interests of Bosnian Muslims, Croats, and Serbs. Transparency of ownership is lacking—though a draft law on the topic is expected to pass after the elections—and most outlets remain linked to political parties.

Nontransparent funding procedures and the outsized role played by public-sector money reinforce this unfortunate status quo, which is ultimately a reflection of the unwieldy ethnicity-based political structures that were entrenched by the 1995 Dayton peace accords. A large amount of direct support and advertising comes from the coffers of Bosnia’s numerous, multilayered government bodies, with individual allocations in some cases specifying an outlet or program by name.

The country’s extensive patronage system, in which jobs and opportunities are all linked to political loyalty and interests, also preserves and exacerbates current divisions. The polarization of politics and the media means that journalists face defamation suits and harassment for what they write and often resort to self-censorship.

While relatively vibrant, Bosnia’s online media sphere seems to reproduce the divisions that exist offline. Most news outlets have some kind of online presence, or even their own mobile applications, but these versions often simply republish content or serve up news without analysis or commentary. Although the country’s most popular site, Klix.ba, can’t be easily placed in the ethnopolitical matrix, most other online outlets cater to their respective groups. All are subject to political pressures, including Klix—in late 2014, police raided the site’s premises after it published allegations of corruption linked to RS prime minister Željka Cvijanović. Journalists reporting on sensitive topics also face threats and hate speech online.

Online media may not transcend ethnic polarization in Bosnia, but could they make it worse? This is a legitimate question given the evidence elsewhere in the world that social media can reinforce ethnic and political rifts. However, it is not something that most Bosnians seem to worry about. In the words of Edin Forto, a Federation lawmaker from the liberal party Naša Stranka, the country “has already experienced the use of media as a means of ethnic segmentation in the ’90s.” He argues that social media are unlikely to add anything new to this already deleterious phenomenon.

A media environment made up of distinct echo chambers is unlikely to reduce tensions ahead of the October elections. The preelection period has already produced a number of rather paranoid claims. In early August, Dodik said the opposition is planning to undermine the vote by hijacking trucks carrying the ballots—to which opposition candidates reacted by saying that the RS president should “watch fewer action movies.” Two weeks later, Dodik argued that the United States is meddling in Bosnia’s elections through its aid program; the accusation came shortly after reports that he would not be removed from the U.S. Treasury Department’s sanctions list. Meanwhile, the Croat member of the country’s tripartite presidency, Dragan Čović of the nationalist Croatian Democratic Union (HDZ), has been celebrating the memory of Herzeg-Bosnia, the short-lived Croat ministate that was created during the civil war in the 1990s.

Bosnia’s elections are expected to be tight, with much hanging in the balance. If Dodik wins, he will become a member of the tripartite presidency, leaving the RS presidency to his loyal ally, Cvijanović, and taking his separatist policies to Sarajevo. He is likely to find a willing collaborator in Čović, who has expressed support for the creation of a third, Croat-dominated subnational entity, which would leave the remains of the Federation to Bosnian Muslims.

Such an electoral outcome would not only prolong the country’s chronic institutional dysfunction, it could also take it to a new level, deepening ethnic divisions. Should the nationalist contenders receive a symbolic boost from ongoing talks about an ethnicity-based territory swap between Serbia and Kosovo, Bosnia’s October vote will be even more important to watch, and the country’s future trajectory will become increasingly uncertain.