The ruling party’s thorough manipulation of state institutions and suppression of dissent have ensured that Ethiopia’s May 24 elections will be an uncompetitive formality. 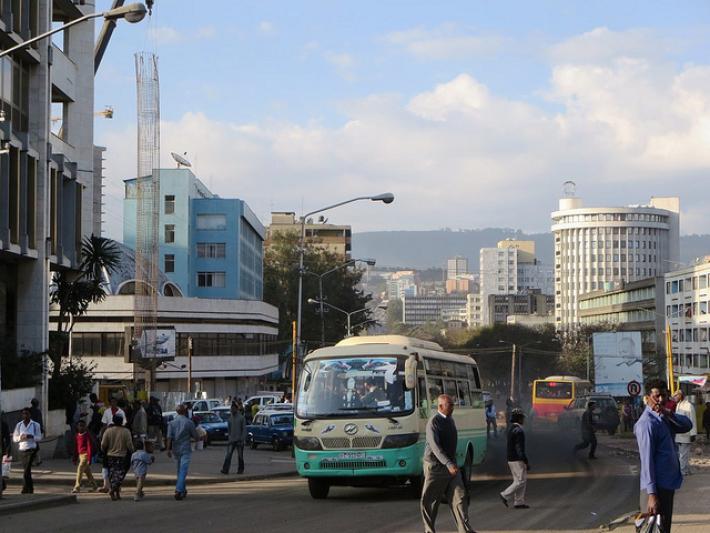 Ethiopia’s upcoming national elections on May 24 are the first to be held since the 2012 death of longtime Prime Minister Meles Zenawi, who presided over a highly repressive political system that decimated the country’s independent media and civil society. Initially, there was a guarded hope that the ruling party—the Ethiopian People’s Revolutionary Democratic Front (EPRDF)—might ease restrictions and allow some level of competition, in order to appease growing discontent with its authoritarian rule and maintain stability within its own ranks.

However, this hope has been dashed over the past year, as EPRDF has cracked down on dissent and used its thorough control over state institutions to cripple the opposition and block any threat to its 24 years of entrenched political dominance.

Control of the media and public discussion

The space for public dissent has long been constrained by a host of draconian laws, media censorship, and aggressive prosecutions. But the government signaled its intent to silence any remaining criticism ahead of the 2015 elections in April 2014, when it arrested six members of the Zone 9 blogging collective along with three journalists and charged them with terrorism-related offenses. (Later that year, security forces detained and raided the homes and offices of four prominent young opposition leaders who had just begun holding leadership positions in their parties and gaining popularity on the national stage. They too are facing terrorism charges.) The attack on independent media continued throughout 2014, leading more than 30 journalists to flee the country as several of the publications they worked for were shut down amid criminal prosecutions.

Meanwhile, EPRDF exercises absolute control over state media and numerous party-affiliated outlets, allowing it to dominate public discussion. As voters head to the polls on May 24, they will not be informed by any national debate on competing policy platforms. Instead, the extent and scope of the political discourse has been framed months in advance, presenting EPRDF’s “developmental democracy” model as a panacea for the economic and social woes facing the country.

EPRDF blatantly uses institutions of the state to block and undermine the activities of opposition parties. Its near-total control of the federal and regional legislatures has for years denied opposition parties a prominent role in lawmaking and government oversight that would allow them to build public support. Even local councils have been rendered effectively out of reach for the opposition since 2008, when EPRDF changed electoral rules to increase the size of each kebele (the lowest-level administrative unit) council from 100 to 300 seats. As a result, during the latest local and municipal elections in April 2013, the well-resourced EPRDF fielded more than 3.5 million candidates, winning a similar number of seats throughout the country, while some beleaguered opposition parties managed to field only one candidate.

It is worth emphasizing that such local administrative structures are the primary tools for maintaining EPRDF’s dominance, as they are linked to a network of operatives that reaches down to the household level in both urban and rural settings. Moreover, municipal officials across the country routinely deny permission for opposition rallies, and police forcibly disband and arrest peaceful protesters, playing a crucial part in suppressing dissent.

Given this virtually uniform control of federal, regional, and local government bodies, the stage is set for a repeat of the 2010 elections, in which EPRDF claimed to have won 99.6 percent of legislative seats nationwide.

Manipulation of the electoral system

As part of its preparations for the May 24 elections, EPRDF coordinated a massive voter registration effort with local government operatives, essentially ruling party officials, who went house to house urging citizens to register to vote during the 50-day registration period. Local officials employ a mix of threats and promises to woo largely apathetic voters, particularly in urban centers. Less than three weeks into the registration period, the National Electoral Board of Ethiopia (NEBE) reported a 127 percent rate of voter registration in the Somali region, where an active counterinsurgency operation is being conducted and past elections have been delayed due to security concerns, casting further doubt on the credibility of the entire process.

EPRDF also mobilized its extensive network of state and party operatives to make sure that opposition efforts to reach constituencies met with a multitude of administrative barriers and politically motivated red tape. In February, the NEBE went out of its way to delegitimize popular leaders of the opposition Unity for Democracy and Justice (UDJ) party by exploiting its internal disputes. As a result, prominent UDJ leaders, including a sitting member of parliament, lost their platforms to run as candidates. Instead, the EPRDF-controlled election board promoted a hitherto unknown faction within UDJ and installed them as the new leadership of the party.

With independent civil society crippled as a result of restrictions imposed by the Charities and Societies Proclamation (CSP), voter-education and election-observation activities have also become the exclusive domain of the NEBE and EPRDF-affiliated “mass associations.” Ethiopian “civil society” election observers deployed under the auspices of the NEBE in 2010 quickly declared those elections “free, fair, and democratic,” even as an EU Election Observation Mission concluded that they were “marred by a narrowing of political space and an uneven playing field” and fell short of international commitments for a free and fair election. In what appears to be an attempt to forestall similar criticism in this election cycle, EPRDF has started downplaying the role of international observers very early, repeating the mantra that the elections need to be credible only to the Ethiopian people.

The May elections are set to be held against the backdrop of multiple terrorism trials of dissidents who were thrown in jail for expressing their views, a divided and persecuted opposition that must simultaneously campaign and struggle for its very survival, a muted international response to EPRDF’s growing repressive measures, and the absence of credible international election observers.

All technical aspects of the elections, from voter registration through casting ballots on election day, may proceed without any major flaws. But the election environment is nowhere near conducive to a free and democratic expression of the will of the Ethiopian people. Instead of providing Ethiopians with the opportunity to freely engage in political discourse and nurture a genuine multiparty democracy, the elections have been reduced to a mere formality for extending EPRDF’s iron grip on power for another five years.