Freedom House president Michael J. Abramowitz lays out our belief that it is in America’s interest to help defend the safety and freedom of others. 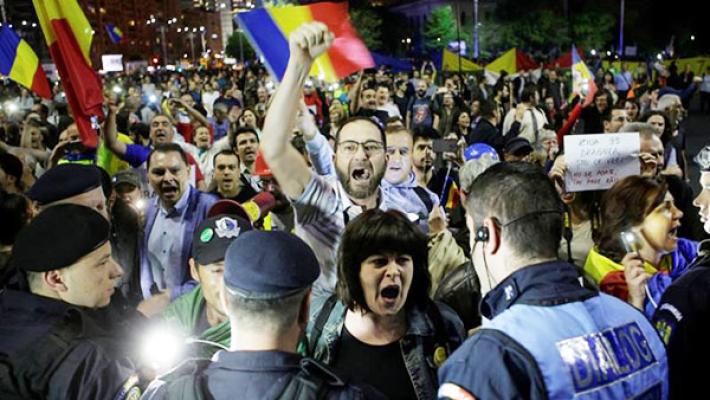 Protesters shout slogans during a demonstration in front of government offices in Bucharest [George Calin/Inquam Photos via Reuters].

Freedom House president Michael J. Abramowitz lays out our belief that it is in America’s interest to help defend the safety and freedom of others.

Michael J. Abramowitz, president of Freedom House, spoke on April 27, 2017, about challenges confronting democracies, and the growing strength of illiberalism, at an event marking the organization’s 76th year of work. Among those honored at the event were House Democratic Leader Nancy Pelosi, Senator Lindsey Graham, actor and activist Richard Gere, and Organization of American States Secretary General Luis Almagro, winner of the 2017 Freedom Award. Here is an abridged version of his remarks:

This is an urgent moment for the country, for the world—and for Freedom House as well. For the first time that most of us can probably remember, the inherent value of liberal democracy has been called into question. The evidence is unmistakable, as shown by our own research.

All these developments are dangerous and alarming. But I’m optimistic that Freedom House, working with our allies in civil society, can help turn the tide by making the case for freedom and liberal democracy as our best chance for societal progress.

Our organization was formed in the early 1940s under the sponsorship of Eleanor Roosevelt and Wendell Willkie, the man who ran against Eleanor’s husband for president. So it is no accident that we are honoring a Democratic leader and a Republican senator, both stalwarts in the fight for freedom.

We believe fiercely that the cause of freedom belongs to no party, and that our voice is strongest when we speak together, whether Republican, Democrat, or Independent. And we believe that while imperfect, American leadership remains an indispensable force for liberty, progress, and freedom worldwide.

This was self-evident to the founders of Freedom House, many of whom were prominent in the battle against the America First movement. Isolationism was deeply embedded in America, still suffering from the aftermath of World War 1 and the Great Depression.

As late as May 1940, more than 9 in 10 Americans polled by Gallup said they did not think the United States should send its army and navy to fight Germany. More than 90 percent! America First found a wide base of support in the business and political communities, and in a cadre of bright young college students that included two future presidents of the United States. They shared a genuine conviction that the safety of American democracy lay in strict nonintervention in the conflict between Germany and Great Britain.

There was something else about the isolationist viewpoint: It was wrong.

In a letter to Mrs. Roosevelt in January 1942, Herbert Agar and the other founders of Freedom House made it clear. “America,” they said, “is in danger today because, when she was safe, she did not help protect the safety and freedom of others.”

Seventy-five years later, the conviction holds: We serve our interests best through unflinching advocacy for the safety and freedom of all. The times today are clearly different than the early years of Freedom House, when we were existentially threatened by the twin totalitarian forces of fascism and communism, but the challenges we now face are no less vexing and perhaps just as dangerous in the long run.

That’s why it’s even more urgent to fight back, to seed courage, to inspire hope.

We need a fiercely bipartisan group that will make the case unapologetically for democracy and freedom—and for U.S. leadership in defending these core values. We need Freedom House—our research reports, our advocacy, and our action around the world on behalf of civil society and human rights defenders. Lasting change can only come from within societies, and our approach is to help those on the ground fighting for freedom themselves.

One of the great human rights activists working in the world today is Vladimir Kara-Murza, who has been waging a courageous battle to hold the government of Vladimir Putin in Russia accountable for human rights crimes. Twice, we believe he has been poisoned for his efforts. We are very happy that he has recovered. It is activists like Vladimir who inspire us as we go about the critical mission of combating the global assault on liberal democracy, in Russia and elsewhere.

As we support activists on the ground, we are also working to ensure policies that amplify their work. We spearheaded the human rights community’s support for the Global Magnitsky Act, which was signed into law last December. This law authorizes the U.S. president to impose targeted sanctions on foreign officials anywhere in the world who commit gross human rights abuses or engage in large-scale corruption.

Our annual reports—Freedom in the World, Freedom of the Press, and Freedom on the Net—remain the definitive measure of the health of democracy. They receive media coverage in over 80 countries and now reach millions on social media. They are cited by global leaders across the political spectrum and among voices as varied in recent weeks as the Wall Street Journal and John Oliver on HBO.

Since 2011, in partnership with the State Department and other countries, Freedom House has also provided emergency assistance to more than 3,000 human rights defenders, gay and lesbian groups, members of religious minorities, and civil society organizations under threat or attack in more than 100 countries. In Pakistan last year, Freedom House helped relocate and provide security for an organization working on gender-based violence after its members were attacked and its office ransacked. Thanks to our help, this organization is now back in operation.

I would like to thank our staff, our board—and all our supporters. Your investment in Freedom House is making a powerful difference in realizing a world in which every person enjoys the blessings of freedom and democracy.