A regime’s sports policy offers insights on its approach to governance and foreign affairs. 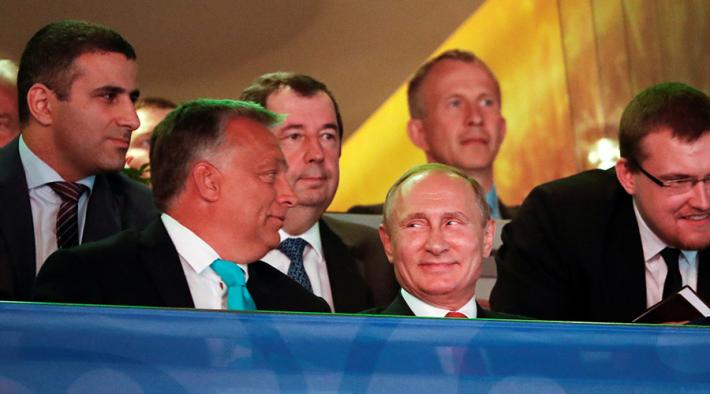 A regime’s sports policy offers insights on its approach to governance and foreign affairs.

Like other authoritarian-minded leaders, Hungarian prime minister Viktor Orbán equates triumphs on the playing fields with national greatness, and the nation’s greatness with his own. Recently Budapest hosted international championships in swimming and judo. Among the spectators at the judo event was Vladimir Putin, who similarly identifies superiority at sports as a manifestation of his and Russia’s political power.

For Orbán, however, the only sport that really matters is soccer. He played the game in his younger days and remains a huge fan. During the 1950s, communist Hungary enjoyed respect as a European soccer power. Orbán wants to repeat the triumphs of yesteryear, and has plowed considerable public revenues into a nationwide effort to that end.

The Hungarian state is spending upwards of $2.2 billion to construct or renovate over 30 soccer stadiums, along with academies to train the stars of the future. In keeping with the standard operating procedure of Putin and other strongmen, much of the construction work is being done by contractors aligned with Orbán’s Fidesz party. The prime minister has been open about his intention to use political dominance to build a class of dependent business magnates, who in turn will supply the resources to finance Fidesz at election time. The stadium projects thus have multiple purposes: to give new enrichment opportunities to politically loyal oligarchs, rebuild Hungarian soccer, and eventually transform Hungary into a sports juggernaut.

The latter two goals are still probably beyond the horizon. While Orbán is ordinarily quite loquacious on the subject of Hungarian soccer, he fell silent earlier this year after the national team lost a match, 1–0, to the tiny principality of Andorra, population 80,000. But he can take solace in the construction of a soccer stadium and academy at Felcsút, the home village of his boyhood. The stadium has a capacity of nearly 4,000 people, about twice the size of the local population. It includes a VIP section with leather seats and video monitors attached to the backs of chairs.

Of course, other societies have unsavory ties between politicians and big-time sports. During the 2016 U.S. presidential campaign, Republican candidates competed to be seen on prime-time television sharing high-fives with Dallas Cowboys owner Jerry Jones in his luxury box. And although the federal government does not spend money on sports teams, nor on the U.S. Olympics program, local governments in the country have spent billions to finance stadiums for football and baseball teams.

What sets democracies apart is the fact that a pluralistic private sector—rather than a single political leader—is typically the dominant partner in such relationships, and that the activities of both sides are the subject of intense public debate and dogged media coverage. Proposals to spend taxpayers’ money on sports facilities are regularly challenged by activists and opposition politicians. In a number of cities, residents have voted down plans to use government funds to build huge domed mega-stadiums.

The barons of American football also face public scrutiny over players’ refusal to stand during the national anthem, the enforcement of rules about players’ off-field behavior, and the huge question of the long-term health impact of repeated blows to the head.

How would such challenges to the mythology of the sports world be dealt with in a country like Hungary, with its increasingly state-influenced media? Or in Russia and China, both full-blown authoritarian regimes?

Public opinion still counts for something in Hungary. Thus the government abandoned a costly bid for the Summer Olympics after enough signatures were gathered to put the issue up for a referendum.

Russia is another story altogether. The state spent an estimated $50 billion on facilities for the 2014 Winter Olympics in Sochi, and much of the money was allegedly siphoned off by corrupt, politically connected contractors. Next year, the country will play host to soccer’s World Cup, an especially unseemly spectacle given Russia’s illegal occupation of Crimea and military involvement in eastern Ukraine.

The Russian doping scandal actually carries interesting echoes of the Kremlin’s policy toward Ukraine. Both were characterized by lying, stealing, and denial of responsibility in the face of sanctions. Russia built a mammoth research and development operation to supply athletes with the latest in anabolic steroids and the masking agents necessary to deceive drug testers. The Federal Security Service, Russia’s secret police, participated in an elaborate scheme to prevent the World Anti-Doping Agency (WADA) from doing its job.

When the doping project fell apart and international sports federations imposed sweeping bans on Russian athletes for the 2016 Olympics, Putin and his mouthpieces dismissed the affair as an American conspiracy. However, after grasping that WADA and the various federations actually had the power to enforce severe punishments, Russian officials acknowledged that Russian sports suffered from a “doping culture” and promised reforms. This explanation placed responsibility on unnamed sports officials and the athletes themselves, and not on the Kremlin, which clearly knew what was going on, tolerated the abuse, and was complicit in a strategy of gaining sports supremacy through banned substances.

China’s approach to sports also reflects its particular style of authoritarian rule. Whereas Russia tries to reclaim past glory in large part through bluff and subterfuge, China has the resources to focus on rapid state-led development and total control over the regime’s public image. A country with little history of sports excellence, China emerged as an international athletic power just in time for the 2008 Beijing Summer Games. Its success stemmed not from any special upsurge in popular interest in sports participation, but rather from a massive official undertaking to develop Olympic-level competitors in events that offered the most opportunities for medals.

Beijing also impressed the world with the sound-and-light choreography that accompanied the 2008 games, and it is now preparing for the 2022 Winter Olympics. President Xi Jinping recently declared that China will fulfill its commitment to ensure “fantastic, extraordinary, and excellent” Winter Games. Since he usually gets what he wants in the one-party state and is preparing to begin a second five-year term in office, it’s a safe bet that Xi will make good on his vow.